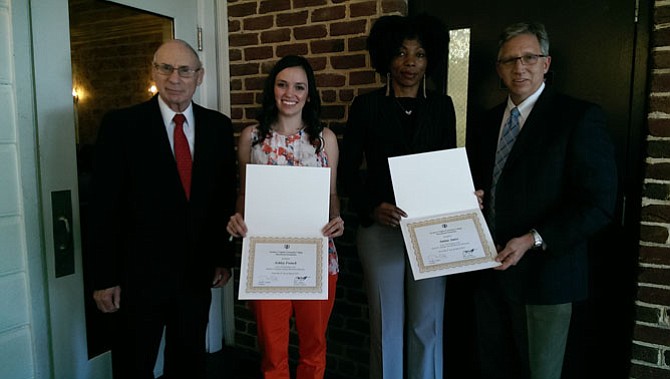 Donors and friends of the Harriet H. Fatzinger Nursing Memorial Scholarship gathered for a luncheon at the Mount Vernon Inn on March 9.

Amina Amisi of Falls Church and Ashley French of Great Falls are second-year nursing students at Northern Virginia Community College, each expecting to graduate with completed Associate’s degrees in May this year.

Amisi has been accepted by the George Washington University, to begin work this fall on her Bachelor’s degree, and eventually wants to work in the operating room on open-heart surgeries.

“It’s the nurse who sews you back up,” Amisi said, “not the doctor.”

French plans to begin her career as a Registered Nurse over the summer and start her Bachelor’s degree in fall of 2017.

Both of these aspiring young women said their goals wouldn’t be within reach without help from the Harriet H. Fatzinger Nursing Memorial Scholarship. This year’s awards were presented during a luncheon at the Mount Vernon Inn on George Washington’s estate, March 9.

“Finances have always been a roadblock to pursuing nursing education,” said French, who had to drop out after one semester of previous coursework in Roanoke because she couldn’t afford it any longer.

“This has just made that path so much more attainable,” she said. “Now I can focus much more on school, and back off on work.”

Amisi reflected on the experience that inspired her to become a nurse in the first place, watching other nurses work with her daughter back in the Democratic Republic of the Congo.

“It touched my heart,” she said, seeing the way they cared for her daughter, even though they were strangers.

“You don’t know me,” Amisi said to the donors and friends of the scholarship foundation, “but care enough to invest in my life.”

Each partial scholarship is worth $1,200, Fatzinger said.

Amisi said the relief of financial stress also means a lot to her, is inspiring her to do better as a student and eventually be a better nurse.”

“I appreciate what other people are doing for me,” she said. “Much has been given, so I also can give back.”

“She was a quiet person,” Dr. Fatzinger said. “She always wanted to be a nurse, but was a late bloomer; she had a lot in common with our community college students.”

According to Dr. Fatzinger, the scholarship foundation endowed account has reached $70,000 to date.

During the program, Supervisor Dan Storck (D-Mount Vernon) commended the people in the room for caring deeply about each other in the community and about health.

“We’re trying to make a difference in all our lives by giving a hand up to the next generation,” Storck said, “and little bit of money goes a long way.”

For more information or to make a tax-deductible donation to the Northern Virginia Community College Educational Foundation, visit www.nvcc.edu/foundation.