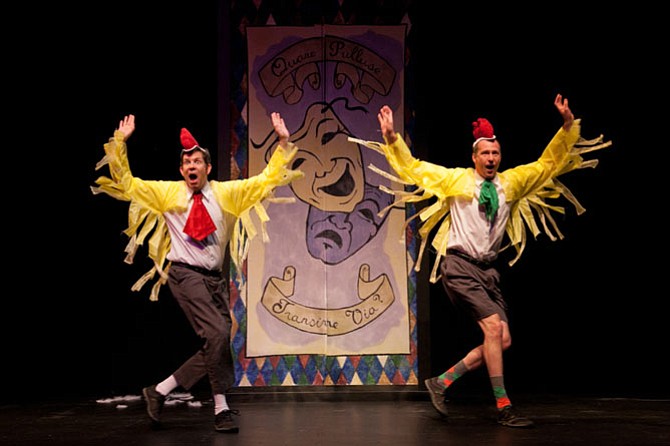 They are back. The Reduced Shakespeare Company (RSC) is returning for its regular appearance at Reston’s CenterStage. This time the RSC will bring their wit and full-speed-ahead frisky physical theater to skewer all things comical with “The Complete History of Comedy (abridged).”

For this appearance the RSC will present their special take on the past centuries and current headlines with “The Complete History of Comedy (abridged).” Comedy will be lovingly mocked in a vaudeville-like evening. Whether high-brow or low, from intellectual drollness to the groans of total silliness, nothing is off-limits to the fertile minds of the RSC.

There is a very special relationship with Reston audiences, noted Reed Martin, long-time RSC performer and co-creator of this show. “I'm certainly grateful that Reston CenterStage has booked us every year since 1987. We have a deep connection with audiences in Reston. They enjoy what we do and are always curious to see what we're up to next.”

Martin indicated that CenterStage patrons will be treated to a performance that will be “fast, funny and physical. And we're vaudevillian in style - verbal and physical, scatological and intellectual, clever and stupid.”

As in the past the Reduced Shakespeare Company performers will meet-and-greet patrons in the Community Center lobby after the performance. As Martin said, RSC will be in “the lobby after the show shamelessly hawking our merchandise and signing programs and ticket stubs. It's sort of our trademark. We love to chat with the audience after the show. In Reston it's like a time to catch up with longtime friends.”

“If you have not seen the Reduced Shakespeare Company perform; if you enjoy ‘Monty Python’ or Buster Keaton or ‘Looney Tunes’ or Carol Burnett or ‘Key & Peele’ then give us a try,” said Martin.

The RSC evening promises to be a wild ride of unconventional, send-up comedy. Who knows, even a current social media post might appear on stage. Nothing is sacred.