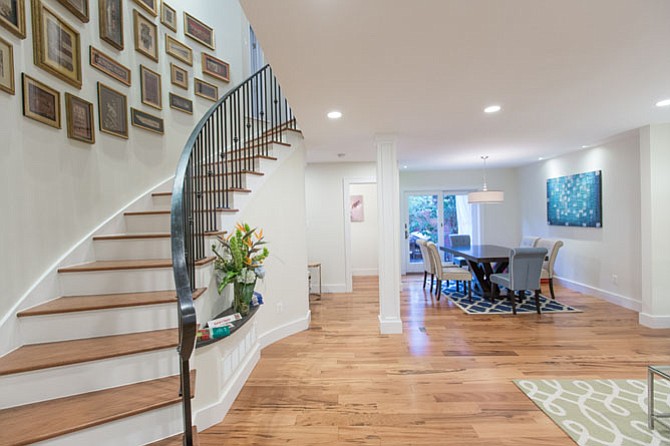 A Reston-based designer was chosen as the National Association for the Remodeling Industry (NARI) Capital CoTY (Contractor of the Year) Grand Award Winner in the category of “Entire House Under $250,000” recently. Mina Fies, CEO of Synergy Design and Construction, was recognized for remodeling a Reston townhouse that was built in 1968.

”We are very honored. We’re up against a lot of people because there are some really great contractors out there.”

“We are very honored. We’re up against a lot of people because there are some really great contractors out there,” said Fies. “We were able to pull it all together with a high level of detail, with the client living in the basement and a lot of moving parts. Winning the award was icing on the cake.”

The family of five had lived in the home for 14 years and two of the three children had gone off to college when the owners decided it was time for an update. “The birds are leaving the nest, and the family wanted to open up the space and make the rooms larger for entertaining,” said Fies.

The kitchen was transformed from a cramped space to one that is light and airy. The cabinets were painted and a new backsplash added. Removing a wall from the front of the home created a larger foyer and allowed for a free-flowing space from the foyer to the living and dining rooms.

The most dramatic transition was on the second floor of the home where the bedrooms are located. “They had a tiny master bedroom and bathroom and no master closet,” said Fies. “They wanted to re-work it so there was a master closet.”

The Synergy team reconfigured the bedrooms, creating openness and closet space. A fourth bedroom was converted into a new, more spacious master bathroom. The small master bathroom became a closet. All the bedrooms were updated with paint, lighting, new doors, and new flooring.

“From a living perspective it appears much larger and makes it easier to move about,” said Bob Meixner, the homeowner. “We can fit many more people in the house comfortably that we could before and they can move around more easily.”

The Meixner family lived in the basement of the townhouse during the 90-day remodeling project. “It was like the early days of marriage when you have a small one bedroom apartment, but Synergy went out of their way to make it as easy as possible.”

Meixner said that he and his family enjoy entertaining, which is much easier to do in the new space. “The biggest Aha moment came over the holidays. We generally have our immediate family and all our kids' friends for Christmas Even dinner,” he said. “We were always packed in, but this past Christmas people could move around more freely. It’s been a family tradition for years and this time it was more spacious.”