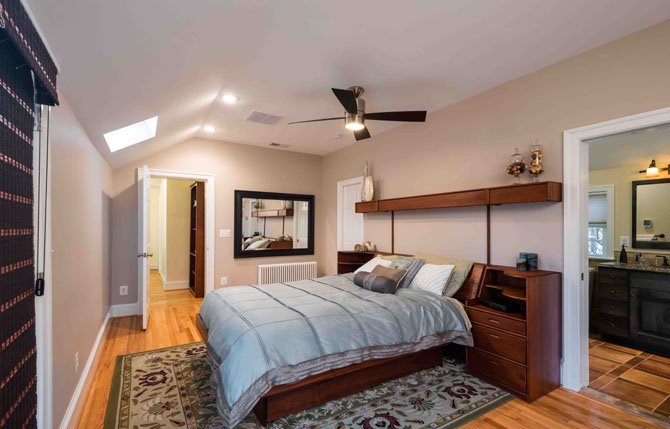 In the end, a skillful spatial reconfiguration is like a deft magician's trick — you've seen it with your own eyes, but you still can't figure out how they did it.

“All the changes stayed within the house itself, yet there's much more capacity and openness.”

By converting an L-shaped plan to a bisected layout, Designer Sarah Wolf achieves an open and airy ambiance in a room that had previously been cramped.

Sarah Wolf, the designer at Foster Remodeling Solutions hired by Alice and Paul Goulet to find an alternate floorplan solution, is pleased with the outcome, too, but she's seen this before. She said that owners often think the only way to gain useable square footage is to build an addition.

“The real challenge to converting less into more,” Wolf said, “is knowing where existing space is being wasted.”

The old L-shaped configuration consisted of two converging legs, both too narrow for comfortable habitation, the owners say.

But to start at the beginning: the Goulets purchased this brick-clad circa 1940s three-bedroom house 10 years ago when Alice Goulet was expecting the couple's first child.

As the family grew (there are now two girls and a boy — all under age 10), so, too, did the need to plan ahead. Starting in 2007, in fact, the Goulets hired Foster Remodeling on two occasions: first to finish the basement and enclose a porch; the second time to design an eat-in kitchen.

One fact emerging in the earlier remodelings, however, seemed daunting relative to the future. Under city code, the Goulets learned, the amount of new construction that could be added to the exterior had already been maxed-out.

“That meant we were looking for more usable space inside the existing structure,” Wolf explains. “And this is the real frontier in older close-in homes; it's interior space planning that has really revolutionized the way traditional homes are now being used.”

Itemized as a “wish list,” the Goulet's goals seemed simple enough. Alice Goulet wanted a soaking tub, and an upstairs location for the washer/dryer. Paul Goulet envisioned a large walk-in shower. Both sought more closet space and “elbow room ” in the master suite — plus, a larger bathroom for the kids, a new place for the linen closet...

BEFORE: No room for a soaking tub here. While Wolf's only deletion was a small linen closet, the designer says that “inches count” in a tight-space plan solution.

AND, STILL, there was this lingering question of: what next? Where could more space be found if needed?

“Initially, I found it hard to see how we were going to gain any usable space,” Alice Goulet said. “The master suite was pretty built-out.”

Specifically, previous owners had constructed a rear elevation two-level wing with the master bedroom on top accessible through a small bedroom in the main house. The suite itself was configured as an L-shaped sleeping area wrapping a shelled-in enclosure that included a wardrobe closet, a linen closet and a master bath.

“The adjacent room in the main house had become a sort of foyer and dressing area for the master suite,” Alice Goulet said. “Since the walk-in-closet was immediately inside the bedroom door, the entrance to the bedroom often got pretty cluttered.”

All that changed when Wolf went to work.

Exploring several budget variations, Wolf presented two plans: one that retained the existing space configuration as-is; a second option that “wipes the slate clean” — eliminating the “L” and reapportioning the suite into two parts: a rectangular sleeping area on the wing's eastern side; a walk-in closet and master bath positioned side-by side on the room's western wall.

“We saw immediately how well the second plan worked, “ Alice Goulet said. “It makes the bedroom much more functional, and private.”

While relocating a small linen closet was the only functional en suite deletion, Wolf's master bathroom layout finds the vital square footage needed for both a soaking tub and a walk-in shower.

The part of the floor previously occupied by the old bath now becomes a 36-square-foot walk-in closet complete with tray ceilings. The plan also reassigns the former suite foyer as the footprint for a new children's bathroom — which is now twice the size of its predecessor.

The real boon to Wolf's solution, though, is how well the new space works.

“The bedroom feels much larger,” Alice Goulet said. “The narrow dressing zone has been eliminated. The whole room is open and airy.”

Choosing lighter reflective colors for wall surfaces, the new scheme draws out the brighter natural ambiance of a room that features east-facing French doors, a second window and a skylight.

A new teakwood custom-designed bed and headboard provides a suitably geometrical focal point to a room that is otherwise tranquilly elemental.

Alice Goulet said that most of the space planning and finishwork decisions were made at Foster Remodeling's showroom in Lorton.

“The showroom helped to made the process orderly,” she said. “So many options inspire creativity.”

Thinking ahead, the Goulets had the design team create stair access to a third floor attic, which they plan to eventually build-out as either their son's bedroom or a children's playroom.

“What we really appreciate about the incremental approach we've pursued with Foster is that it allows us to think everything through carefully,” Alice Goulet said. “That really matters when you have a growing family.”