Residents can submit complaints concerning allegations of abuse of authority or misconduct by Fairfax County police through the panel. 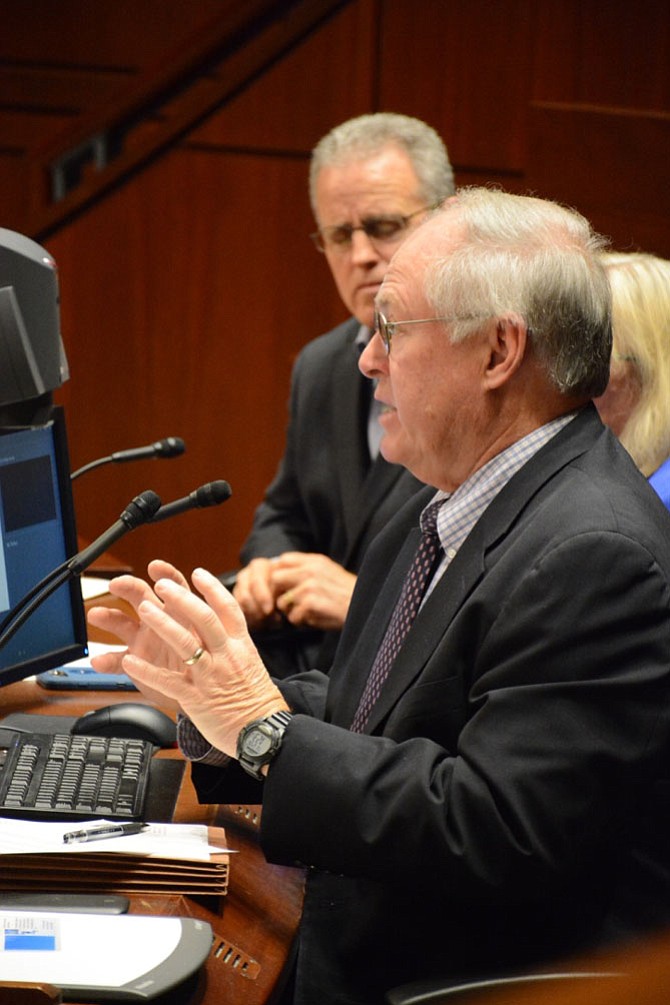 Ad Hoc Commission member Adrian Steel offered suggestions for how civilians with potentially new information in a case could be informed of a police civilian review panel hearing and systematically present their materials, such as video evidence. Photo by Tim Peterson.

The ongoing goal of increased transparency and accountability for the Fairfax County Police Department now has nine fresh faces. On Tuesday, Feb. 28, the Board of Supervisors announced its appointees to the inaugural Civilian Review Panel, one of the recommendations of the Ad Hoc Police Practices Review Commission.

“The Police Civilian Review Panel will promote further transparency and openness in community policing,” Board of Supervisors chairman Sharon Bulova said. “Each appointed member will bring a valuable perspective, extensive knowledge and years of community involvement to the table.

“Together with their impressive skill sets, this group of individuals will set the bar high for how the Civilian Review Panel will operate,” Bulova continued. “I am very proud of our Fairfax County Police Department. This panel will contribute toward making us a model of excellence for the nation.”

Earlier in February, the board announced the hiring of Richard Schott as independent police auditor, a full-time paid position whose office is charged with reviewing police use of force cases that involve serious injury or death.

The panel’s purview will include public complaints, allegations of abuse of authority or misconduct by FCPD officers. They'll review completed police internal affairs investigations regarding such complaints and may hold public meetings to go over the investigations with members of the community.

Another function of the panel is the ability to make recommendations for revisions to police policy, training and practices.

Adrian Steel of McLean, a member of the Ad Hoc Commission, was appointed the panel’s first chairman. Steel said that the function of addressing policy may be “as important, if not more important in terms of reach of impact, as reviewing an investigation.”

First on the Panel’s agenda is drafting bylaws for itself. Steel said they plan to look to jurisdictions including Denver and San Jose that have similar bodies for guidance. He intends to set up a first meeting in March, and is hopeful the panel can begin reviewing cases by mid-summer this year.

The volunteer panelists’ biographies, as provided by Fairfax County, follow in alphabetical order:

Aguilar, originally from Honduras, investigates allegations of police misconduct at the D.C. Office of Police Complaints. Aguilar is a former police officer for the George Mason University Police Department and previously worked as a case manager and internal investigator for Youth for Tomorrow. He has served with the Vinson Hall Retirement Community in McLean and with the Fairfax County Office for Women & Domestic and Sexual Violence Services. Aguilar is bilingual in Spanish and English.

Davis-Siudut has spent the past 15 years providing training as well policy development and implementation in the areas of sexual violence, human trafficking, and cultural diversity. Davis-Siudut is of Korean descent and has previously worked for the National Underground Railroad Freedom Center, Polaris Project, and the U.S. Marine Corps. She currently works with the Air Force as a sexual assault prevention and response subject matter expert.

During his six years as a federal prosecutor, Descano led numerous investigations conducted by FBI, IRS and USPIS agents. While at the Department of Justice, he analyzed documentary evidence, interviewed witnesses, and reviewed the investigatory work of agents and other prosecutors. Descano currently works as chief operating officer and general counsel for Paragon Autism Services and serves on the Criminal Justice Committee of the Fairfax County NAACP. Descano also serves on the Fairfax County Trails and Sidewalks Committee, is a graduate of West Point, and was nominated by the Fairfax County NAACP to serve on the Civilian Review Panel.

A Fairfax County resident for more than 30 years, Doane spent most of her career as an attorney in Washington, D.C. representing an array of clients, including the National Down Syndrome Society and Down Syndrome Research and Treatment Foundation. Doane has been an advocate for the disability community for more than 20 years and understands the importance of building positive relationships between law enforcement officers and people with disabilities. Her experience as a journalist prior to attending law school gave her an appreciation for clear, timely and transparent communication between government officials and the community. After her retirement, Doane trained as a mediator and facilitator and currently serves as a lay pastoral minister in her church.

Kay is a trial lawyer who has handled civil litigation, criminal defense and personal injury cases for over 20 years. He currently focuses his practice on commercial litigation matters. As a criminal defense attorney, he has represented individuals charged with everything from simple traffic matters to the most serious felony offenses in state and federal courts. Kay previously served as a judge advocate in the U.S. Navy and Assistant Commonwealth’s Attorney for Fairfax County. A lifelong Fairfax County resident, Kay attended Fairfax County Public Schools, coaches his son’s youth basketball team, and served on Fairfax County’s Ad Hoc Police Practices Review Commission. Kay was nominated to serve on the Civilian Review Panel by the South Fairfax Chamber of Commerce and the Fairfax Bar Association.

Sayles has over 35 years of law enforcement and criminal investigations experience. He worked as a Federal Agent for the U.S. Drug Enforcement Administration (DEA), U.S. Department of Justice (DOJ), and served as a police officer for the Denver, Colorado Police Department. Sayles gives back to the community by volunteering for the Clean Fairfax Council and Creekside Homeowners Association, and was the recipient of a Fairfax County 2016 Environmental Excellence Award for removing 800 bags of trash and over 1,200 illegal signs along nine miles of Centreville Road. Sayles served as a member of Fairfax County’s Ad Hoc Police Practices Review Commission and has continued to work with the Board of Supervisors and Fairfax County Police to implement the Commission’s recommendations.

Senseman is a licensed clinical social worker who has spent many years working with clients who experience mental illness, PTSD and substance use disorders. Senseman has worked in private practice providing treatment and therapy for individuals young and old who experience a variety of mental health disorders. Senseman taught at George Washington University Medical School and volunteers for her Condo Association Finance Committee. Previously, Senseman worked at the Woodburn Community Mental Health Center and at the Bailey’s Crossroads Community Shelter helping residents of all socio-economic backgrounds receive mental health treatment.

Steel served on Fairfax County’s Ad Hoc Police Practices Review Commission and has continued to work with the Board of Supervisors to implement the commission’s recommendations. Steel has been appointed by the Board of Supervisors to serve as the first chairman of the Police Civilian Review Panel. Steel has demonstrated extensive knowledge and a strong commitment regarding 21st century police policies and best practices, including civilian oversight. Steel currently works as a senior counsel at Mayer Brown LLP where he has practiced law for over 35 years, and previously served as special assistant to FBI Director William H. Webster.

VanLowe was appointed to the Governor’s Taskforce for Improving Mental Health Services and Crisis Response and served on the Public Safety workgroup. She has devoted much of her community service work to serving those with physical, mental, emotional, intellectual or cognitive backgrounds. VanLowe practiced law in law firm and corporate settings, served as board chair of The Northern Virginia Therapeutic Riding Program, Inc., and received the National Women of Color Special Recognition Award at the 2008 STEM Conference. VanLowe is a 36-year resident of Fairfax County.