A Commission For Veterans in Alexandria?
Votes

A Commission For Veterans in Alexandria? 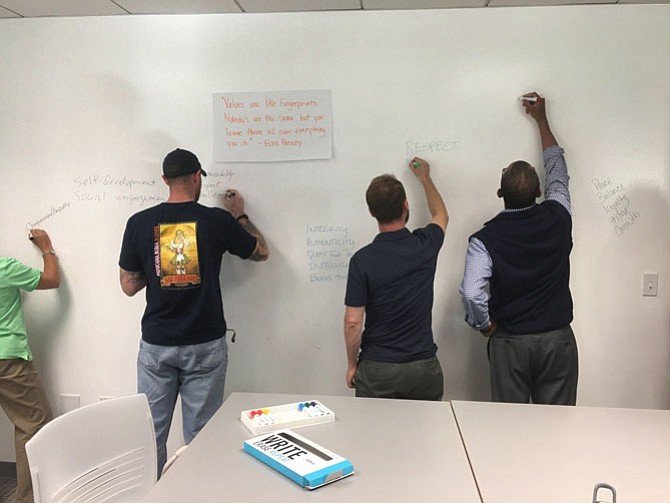 The last two audience members at the Nov. 29 City Council meeting weren’t waiting on a docket item. After the rest of the audience had left, veterans Robert Wood and John Bordner waited for Mayor Allison Silberberg’s proposal to create a commission to look at issues that affect the city’s veteran population. The proposal was partially inspired by a panel held the day before moderated by Wood and hosted by Agenda Alexandria discussing issues and opportunities within Alexandria’s veteran community.

“This is a commission to address the concerns and needs of active duty veterans, family members and their caregivers,” said Silberberg.

“The connections within our community can be strengthened,” said Wood. “We have a very active and diverse population of veterans. A city committee can empower this network, expanding the voice and reach of an important portion of our community.”

Wood recognized that there are issues within the veteran community a panel could also help to address, like unemployment and the high rate of veteran suicides. Wood and other veterans emphasized that ideally a committee would help local veterans in transition become more involved in local business and community, something that could help give veterans a purpose and give the city a wealth of manpower and experience.

“We see a lot of veterans struggling with understanding their purpose post-transition,” said Emily McMahan, director of Capitol Post, an Alexandria based nonprofit that helps veterans transition into new careers. “It goes beyond just finding a job and translating those skills into employment. [They need help] understanding who they are, what their values are, and finding a sense of purpose. We’re finding, across the board, that veterans are getting hired but not staying at their first job beyond one or two years. Employers don’t really know how to integrate veterans to their full capacity.”

McMahan said her hope was that a commission could help coordinate veterans with local resources, both in terms of services veterans need and opportunities to become involved.

“There’s lots of resources that fit under the umbrella for what a veteran might need, and how do we incorporate those resources at a local level?” said McMahan. “There’s 19 bases within 50 miles of Alexandria. We have such great talent here because of the types of units and commands here. Some of the technical commands are located close to us. The city could do tremendous work coordinating and facilitating services they offer … It’s really cool to see the community taking this initiative. To really do a holistic approach to vets with regards to business and care, with regards to veteran commission, is pretty neat.”

Francis Q. Hoang, a veteran and lawyer in Alexandria, said a veteran commission’s chief role should be to give a voice to veterans in the city and start a dialogue between veterans and the rest of the community.

“At the end of World War II, 16 million Americans served,” said Hoang. “That was about 12 percent of the country. Currently, four million served in Iraq or Afghan, that’s a little over one percent. As a percent of population, it’s such a smaller population. There’s a gulf that can exist between those that served and those that haven’t. A Commission for Veterans can help inform decision makers and elected officials with a better perspective.”

But while the concept was supported by the City Council, many believed the idea needed to continue being refined. Vice Mayor Justin Wilson noted that he believed the city government already had too many boards and commissions, but that veteran affairs was an area of policy not currently being addressed. Wilson proposed an ad hoc group to look into the creation of a commission.

The majority expressed agreement with this idea, but Silberberg pushed back.

“If it’s a small step on its way to becoming a commission, then that’s fine, but that’s not what I was looking for,” said Silberberg. “As far as ad hoc goes, when I think about those who sign up and serve and put their lives on the line, they’re not signing up ad hoc.”

But City Manager Mark Jinks noted that creating a commission is not simple. Jinks says there is staff work that has to go into determining best practices for the group, implementation of policy suggestions, and other behind-the-scenes work that takes time and manpower.

“Someone has to do the legwork to make a commission happen, that’s staff work and we don’t have [the person] to fill that role,” said Jinks. “There would be a cost to this for staffing. We can make a judgment later about what kind of staffing this would take long-term.”

The council asked City Manager Mark Jinks to come back to the council at a later date with a resolution.