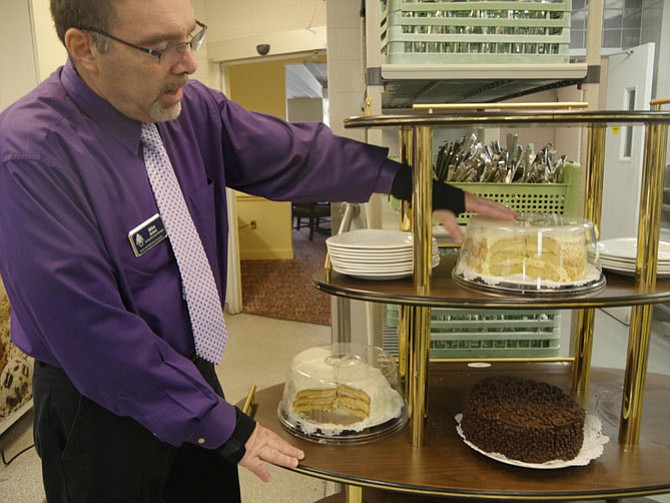 Mike Solari, the purchasing and catering manager at Vinson Hall, readies the dessert cart for lunch with coconut cake, chocolate mousse and lemon cakes. Soon it will be full of tarts and other choices offered in the formal dining room. Photo by Shirley Ruhe. 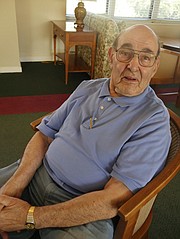 Norman Zalfa says his favorite thing at Vinson Hall Retirement Community is networking with people. The independent units house 185 in Goodwin House and 128 in a new, as yet unnamed, building. 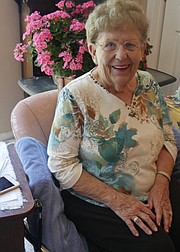 LaVonne Boyer, 4-year resident at Vinson Hall, says, “There are so many clubs for anything you want to do.” She tries to take advantage of as much as she can. Boyer is on the Chapel Committee. 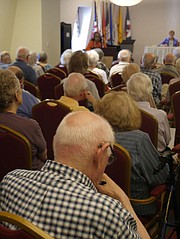 Monthly Residents’ Association meetings allow for discussion of issues such as the recent decision to allow owners to have pets in their residences. 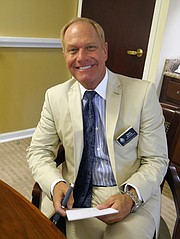 David DeClark, director of marketing at Vinson Hall Retirement Community, says he decorates 17 Christmas trees 8-10 feet tall with different themes each year for Vinson Hall lobbies. “Can you tell I like this place?”

Mary DeMaris is headed down on the elevator at Vinson Hall with her black case of art supplies, an artist headed to a still life class out of the building. “There is a club here for everything — poetry, art, choral group, photography, book, gardening,” she said.

Vinson Hall residents can use the bus and courtesy car for errands, doctor’s appointments and other scheduled outings.

"The food is excellent. I don't know I can pick a favorite. Hmmm, the soups here are unique, delicious. The dining director — he’s a real foodie," said Mike Solari, the purchasing and catering manager at Vinson Hall. "You'll never believe it but the favorite is chicken livers with a light gravy if they like. And the seafood dishes, oh seafood Newburg. Lots of people use imitation seafood, but we use real shrimp, crab, lobster and scallops in this dish."

Norman Zalfa from Arlington, said, "Well, I like pound cake. I don't like a lot of cream and other stuff so I mentioned it to the chef. He made a pound cake for me and had it delivered to my apartment."

Solari says that in his opinion you eat with your eyes first so he presents a nice plate. Sometimes when he creates the weekly menu, "It's what I feel like. I try to have one pork, chicken, beef, seafood and pasta every week and to be sure that I'm not repeating the same thing too often.” Solari says he listens to what people ask for and what they don't like. Solari says the only way he adjusts his menu for older appetites is to take out the salt. “We use herbs instead.”

"Hi Norman," Zalfa waves at a man going by with his walker. "That's my next door neighbor. He was a submarine commander." Vinson Hall independent living is open to commissioned officers and their immediate family from all U.S. uniformed services. They are now accepting government employees of equal rank from the Departments of State and Defense, the CIA and Foreign Service.

Zalfa continued, "We go check on Norman. He is 91-years old. My wife, Grazia — she’s from Italy — went to Eden Center and bought bok choy and other vegetables and made him a bowl of soup today.”

There is no required meal plan at Vinson Hall for independent living so that a person can choose whatever they feel like eating any day from three kitchens — the main dining room, the bistro with cooked to order choices, snacks or light fare.

"My favorite thing is networking with people,” said Zalfa. “It’s small enough you get to know people. It’s a family, really. There is a men's club that gets together, takes walks, works as a support group."

LaVonne Boyer, a four-year resident, says it is easy to make friends here and “there are so many interesting, intelligent and experienced people living here.” She is busy packing for a weeklong trip to Cancun where her family has time-shares and always gather the third week in September. She says right now she has a crazy daily life because her daughter has stage 4 cancer and three children so Boyer does everything she can to help. “Today my daughter is on Capitol Hill where they asked her to lobby for experimental trials and approval of a new medication.” Boyer says when her surgeon husband died early, she went into real estate in Springfield for 35 years to put her children through college.

"I always use the gym. The most appreciated person around here is George, the personal trainer who evaluates each person and then sets up an individual training program,” said Zalfa.

Zalfa reports that he has broken almost every bone from his years of horseback riding in Wyoming, Ecuador and Brazil. "And then there was my motorcycle. And the time I passed out riding my bike and broke my hip." But he says that his wife Grazia says no more motorcycles, "and when she says no, she means no."

Zalfa remembers World War II. “I was 14 when I enlisted but lied and used another kid’s name. I wanted to be a hero.” Now Zalfa runs a business and teaches courses in Arlington on how to organize one’s estate.

Boyer says she uses the gym a lot, the pool and the weight machines. The gym is currently moving into a new expanded space. In addition, new space is being added on the garden level including a dance studio for yoga and stretching, a cyber cafe and some new office space.

A resident’s meeting is underway in the auditorium, also used for community events and guest speakers. Another larger auditorium in the Community Building hosts dances, performances, and the McLean orchestra performs there as well. A piano sits outside the main dining room which has been set for lunch with white tablecloths and with a sign in front about the wine tasting.

Dave DeClark, the director of marketing says Vinson Hall bottles its own wine from grapes in California. Their specialties are offered at dinner and at happy hours during the week.

DeClark says in addition to independent living Vinson Hall Retirement Community offers assisted living, long-term care and skilled nursing at Arleigh Burke Pavilion and Memory Care at the Sylvestery. DeClark says they draw residents from a seven-mile radius. No military affiliation is required for these residences. He adds that a new addition just opened in November 2014 with 75 new independent living apartments, all named after Presidents “but only one after Washington since there was only one first President of the United States.” Vinson Hall is located at 6251 Old Dominion in McLean.