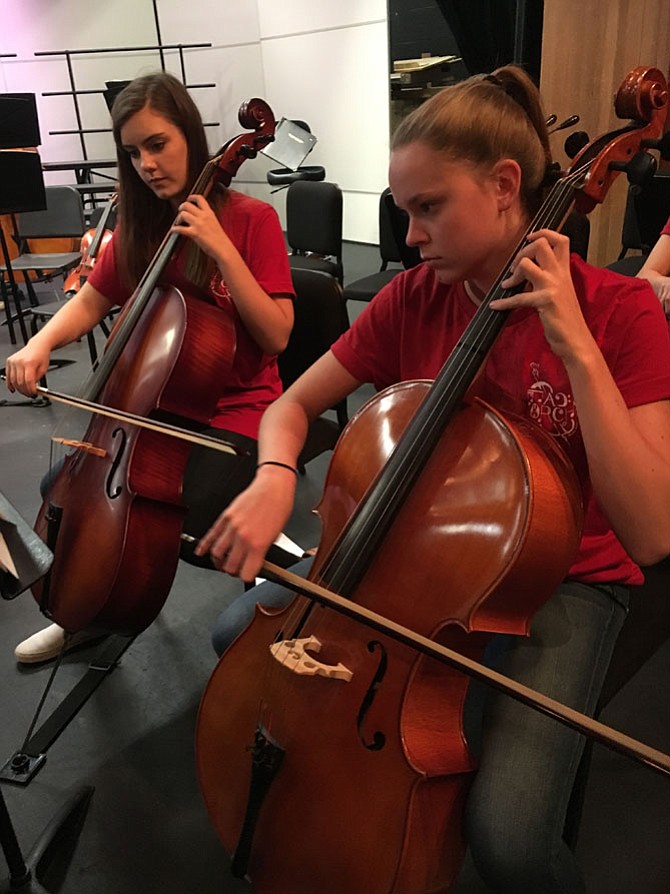 Members of the Symphonic Orchestra warm up before the performance as students from Thoreau MS filled the auditorium. Francesca Branson

Madison High School performed a special concert for Thoreau Middle School last week to celebrate the performing arts and showcase eight different performing groups in Orchestra and Choir programs. Sixteen different musical selections were performed ranging from “African Adventure" by Robert Sheldon, to selections from “Fiddler on the Roof.” David Reynolds, from Vienna ES, played steel pans during “Turn the World Around” and Heather Yacovissi from Thoreau MS played the violin with the Symphonic Orchestra as they played “Irish Journey.”

James McNamara, also from Thoreau MS, joined the Men’s Concert Choir as it sang “Grumble Too Much.” Claire Rowan, Madison High choir director, and Erin Eberly, orchestra conductor, jointly conducted more than 200 students in the final song of the concert, “Tshotsoloza.” Throughout the concert, Rowan and Eberly explained the differences in the performing groups, some of the technical components of the pieces performed and invited future students to consider joining one of performing arts programs next year. As a closing message to the guests, Mrs. Rowan suggested, “Wherever you go, whatever you do, find a musician and you will find a good heart and some place you are comfortable.”