The Adventures of ‘James & the Giant Peach’ in Arlington
Votes

The Adventures of ‘James & the Giant Peach’ in Arlington 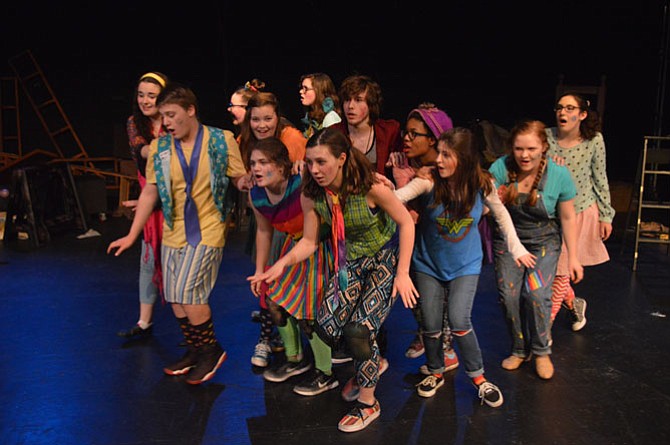 With a cast of 12 students in grades 8-12, Encore Stage & Studio is presenting the musical, “James & the Giant Peach,” from April 6-15 at Gunston Arts Center - Theatre Two, located at 2700 S. Lang St., Arlington. The show is the culmination of the Encore students’ year-long studies.

When James is sent by his aunts to chop down their old fruit tree, he discovers a magic potion that results in a tremendous peach and launches a journey of enormous proportions. Suddenly, James finds himself in the center of the gigantic peach — among human-sized insects with equally over-sized personalities — but, after it falls from the tree and rolls into the ocean, the group faces a series of mishaps and adventures. Thanks to James’ quick wit and creative thinking, the residents learn to live and work together as a family.

“It is a musical written by Benj Pasek and Justin Paul, and they did ‘La La Land’ and ‘The Greatest Showman.’ It’s based on the Roald Dahl book, ‘James and the Giant Peach’,” said Kelsey Meiklejohn, director and choreographer.

“It follows the orphan James really on a journey to change his fate. He ends up with two aunts who are atrocious. He escapes them with the help of a magical man and riding on a giant peach with giant insects who have turned into humans. Those insects become his true family. That’s the plot,” said Meiklejohn, who is also the secondary education programs manager for Encore.

As far as challenges, she said: “Musicals have always been my passion in theater so I love watching the dancing, music and acting integrate to tell a story. More of the challenges of this show come from how much action there is on stage. And imagination. There are lots of imaginative elements.”

The show includes over 15 custom-built puppets that range from giant rhinos with red glowing eyes to spiders with edible legs, and also friendly grasshoppers. “How do you show a peach flying through the sky in a theater? So, we really brought in a lot of puppetry and inventive costumes. They wear shark heads and carry seagull puppets so they can portray two different moments at the same time. So that’s been the biggest challenge with this show,” she said.

Meiklejohn said the story is about the importance of allowing children’s space for their voice to be heard and allowing them to become leaders. “That is what got to me about the story and was important for me to propel forward and guide the show. There’s a wonderful line — ‘The world can change because you believe it can.’ James changes his own fate. In doing so, he finds his true family, and that he could do that as a child is so important.”

“I also think it’s a fun look at family and the people who influence our lives,” she said. “It has some really quirky songs that range from old-school fiddling to a little bit of musical theater to Latin-inspired styles. It’s got something for everyone.”

Gabe MacPhail, 14, of Arlington, plays the title role of James. “James lost his parents when he was young and that messed with him a lot because they were his only family that he had — so he thought,” he said. “He lived in an orphanage where he wanted something better than that and he was getting desperate until it was told to him that he has two aunts who were really mean. He has to learn to rely on himself rather than others,” he said.

The St. Thomas More eighth-grader said his challenge was having to do so much in one show. “He’s (James) really in the entire show — so really having to get a lot of things down, and also at the same time playing someone who is younger than me by four years,” he said.

He added: “It’s nice being able to show this character through music, but at the same time it’s challenging because it’s very high-alto music. It’s difficult to have to sing up one octave from my range.”

Dahlia Vicens, 15, of Arlington plays the Earth Worm. “The Earth Worm is non-binary; she is a boy and a girl; she gets scared easily — like every little thing scares her and she freaks out,” she said.

Her biggest challenge was trying to get into the character of a blind worm and pretend to be an insect. “There’s a scene where James shakes her hand and she doesn’t know what it is. She completely freaks out,” she said. “Also, the hardest part was balancing music and school, working on lines and also doing school work at the same time. That was really hard.”

She added: “I sing a lot in the show, but the big song I get to sing is called ‘Plump and Juicy,’ and how I prepared for it was practicing a lot and working with Doug Ullman (music director) and Kelsey (director) and asking them questions.”

Mike Sarisky, 17, of Falls Church plays the multiple roles of Narrator, Bobby Cop and Porter on a Cruise Ship. “For the Narrator for Ladahlord, I move the story along, introduce the story in the first number and also give James the magic he needs to begin the adventure. I prod James when he needs me to. For the most part he does it on his own,” said the NOVA freshman.

As far as challenges, he said: “It was figuring out why the narrator is guiding the story, why he is singing the opening number. It wasn’t obvious in the beginning until me and my directors decided on one key detail — that Ladahlord is James as an adult retelling the story. That’s the whole reason I’m singing this song describing this amazing adventure that we’re about the show the audience.”

Mia Randers-Pehrson, 16, of Reston plays the role of Sponge, one of James’ aunts. “She is an evil person who takes James in when his parents die. Sponge loves food and hates everything else except for her sister Spiker,” said the home-schooled sophomore.

She added: “Sponge is this very over-the-top character and she’s almost inhuman in that she is a loud and big character. She’s particularly large and doesn’t always know what’s going on…. For me, I don’t have that much experience singing so I spent more time working on the songs. Also, experimenting with different ways to say the lines because they are so over-the-top and big.”

She said the audience takeaway from the show is that: “Friends are what matter most and can be your family if you choose them,” she said.

Hazel Feldstein, 16, of Falls Church plays the role of Spiker, one of James’ evil aunts. “I tried to get into her physically. We did a lot of stuff with accents and I tried to develop a nasty Cockney accent for her,” said the Commonwealth Academy 10th-grader.

She said the takeaways are that hopefully they’ll get a good laugh out of the show. “Spiker and Sponge are the comic relief to let people have a good time and make them laugh and root against them because they’re the villains,” she said.