Eric Gardner of Springfield and John B. Wren of Fairfax set a tent at Burke Centre Festival. 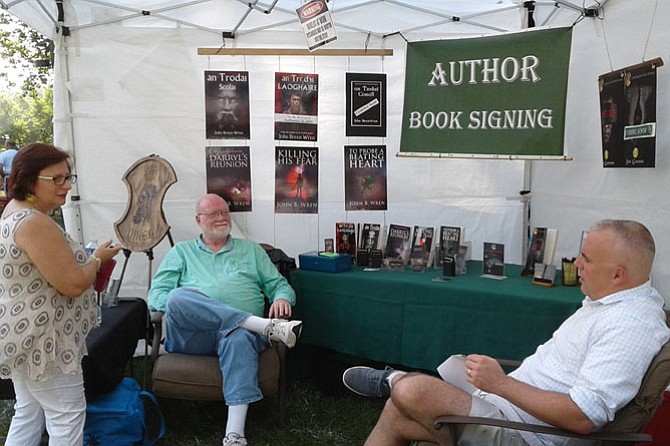 Springfield author Eric Gardner has learned writing his book is easy. So is getting it published.

Selling it is the hard part.

He wrote a 500-page novel called “God’s Will” in 2008. It was printed through an independent publisher that didn’t give its author a publicity machine with a whirlwind book tour across the country.

Gardner, 40, promoted his first opus online at Wattpad, which he calls the literary version of music-sharing website Napster — an online service that revolutionized the way songs were sold after it met resistance more than 15 years ago from the music industry over copyright issues.

Through Wattpad, Gardner said he garnered 1.7 million reads in 15 months since the release of “God’s Will.” Because the action of his novel takes place around the world, he has captured an audience from Canada, Ghana, Australia and China.

Fairfax County novelists John B. Wren, 72, of Fairfax and Eric Gardner, 40, of Springfield man their booth Sept. 10 at the annual Burke Centre Festival, where they sold and signed copies of their books to visitors. 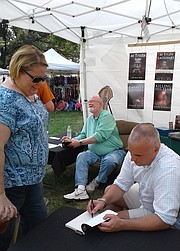 Suzanne Harrison of Burke gets her new copy of “Defiance” by Eric Gardner signed by the author of the “XIII Legion Series Books” Saturday at the Burke Centre Festival. John B. Wren of Fairfax - in background - signs a copy of his book to another festival-goer.

The retired U.S. Army captain started writing in 2006, when his wife, Gretchen — also an Army officer — was deployed to Afghanistan for 15 months.

“I needed something to do at night,” Gardner said. “One page turned into two, two into three,“ he added. It was a cathartic activity for the veteran-turned-stay-at-home-dad of two young daughters.

His contemporary fiction was re-released last month as a series of novels about good versus evil through a different publisher he found online through Amazon.

He also promoted his next book, “Awakening,” due out Oct. 15 for the same price. It is followed by “Sacrifice” Nov. 15 and “Gathering” next spring.

“I literally have 780,000 words written for this series and it’s still going,” Gardner claims. Each of his “XIII Legion Series Books,” he says, contains about 50,000 words.

Although his target market is men aged 18-34 years, Gardner was surprised to learn his true readership is middle-aged women.

He credits four strong female characters in his novels: two protagonists and two antagonists. As the father of two daughters, Gardner wants his fiction to contain solid female role models.

His books are “about mankind’s role in heaven and hell.” The stories, he admits, are somewhat macabre and terrifying.

It’s no surprise this highly-decorated infantry officer who has jumped out of planes found literary inspiration while serving his country in Afghanistan in 2005 and ‘06. Prior to that, Gardner said he was sent to West Africa for the ousting of Liberian warlord, President Charles Taylor, who was found guilty by an international tribunal years later for war crimes and crimes against humanity.

Gardner says his characters persevere through the constant beat down of life. His main character, Gabriel, is asked to raise an army for God and stand shoulder-to-shoulder with angels to stop the fall of heaven.

“And gets the snot beaten out of him on every page,” Gardner points out “but he keeps going and going.”

“This is unapologetically honest,” in which Gardner describes his characters as really gritty and easily relatable to everyone who struggles with the question “why am I here.”

Wren and Gardner have known each other five years through the Northern Virginia Writer’s Club, which meets at area libraries the last Saturday of each month.

WREN, a semi-retired mechanical engineer, has published four books since 2011, when he penned a contemporary psychological thriller about a serial killer in “To Probe a Beating Heart.”

Wren says his interest in Ireland stems from his mother, who was born in a lighthouse in Ireland’s County Cork. The year 2014 marked the millennial anniversary of the Battle of Clontarf and inspired Wren’s trilogy about a family of medieval Irish warriors beginning with “an Trodai Scolai.”

The series, no doubt, required a “wee bit of research,” Gardner chimed. Wren says he takes pride in presenting an accurate account of historical fact while weaving his fictional characters in and out.

His next book, due out by November, is 300 pages long.

“You’re stepping up your game,” Gardner quipped about his peer’s upcoming book “an Trodai Conall,” which will sell for $14.95 paperback and $4.95 e-book.

Both Gardner and Wren get their books published through an online independent print-on-demand service called CreateSpace — a division of Amazon.com.

“I take care of all the editing and all the artwork,” Wren explains, before sending the manuscript.

Although they don’t enjoy the benefit of a publicity dream team, CreateSpace offers marketing advice for a fee and pays their authors as their books sell on Amazon and other retail outlets. Gardner and Wren watch the profits trickle into their account.

The payoff hasn’t justified the hard work yet.

The Northern Virginia Writer’s Club meets Sept. 24 in the Kingstowne Public Library at 6500 Landsdowne Dr. in Alexandria, where guest speaker Dorothy Spruzen will discuss historical research for fiction writers between 1 and 3 p.m. Call (703) 339-4610 or visit www.northernvirginiawriters.org.