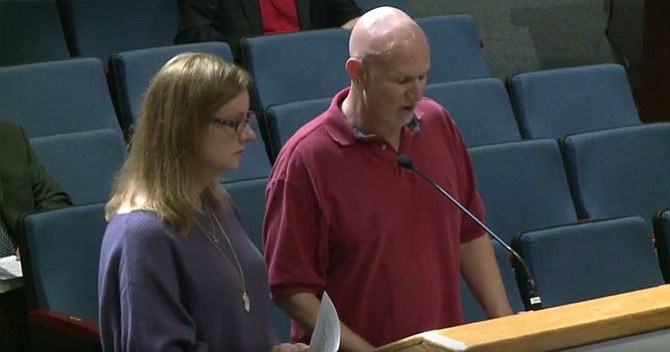 As the FCPS school board was considering renewing the Challenged Materials Interdepartmental Review Committee, the LGBTQ rights advocate Robert Rigby (right) and conservative Christian Meredith Blankenstein (left) decided to take that consent agenda item as an opportunity to address some of the heated and negative interactions between members of the sides with which they’re affiliated. Photo courtesy of Fairfax County Public Schools

Robert Rigby stood before the Fairfax County School Board on Sept. 22 wearing a red polo shirt, typically a sign of unity at board meetings among parents and community members who have opposed recent policy updates in the school system surrounding students who identify as transgender.

However Rigby, a Latin teacher at West Potomac High School, has been an advocate for Lesbian, Gay, Bisexual, Transgender and Queer issues. He’s president of FCPS Pride, a faculty and employee organization promoting LGBTQ rights, and a frequent speaker at School Board meetings.

By his side was Meredith Blankenstein, who described herself as a conservative Christian and mother to two FCPS elementary school students. She was wearing a dark purple-colored shirt.

As the board was considering renewing the Challenged Materials Interdepartmental Review Committee, the pair decided to take that consent agenda item as an opportunity to address some of the heated and negative interactions between members of the sides with which they’re affiliated.

“We rise today to remind the public of the necessity of civility while discussing these topics before this board,” Rigby said. “It’s crucial we recognize and acknowledge the good faith and valid concerns of those with whom we disagree, even though we may work to refute those concerns. Bigotry, hate, phobia and intolerance are not helpful.”

“No matter what we argue about — gender identity, JEB Stuart, bathroom rights — we are all formed in the image of God,” Blankenstein said. “We all hurt. We all cry. We all care and we all feel. Just like everybody else, we all struggle with brokenness. And none of us is worthy of judging others.”

Blankenstein acknowledged “students who identify as transgender struggle with so much, they do not need additional stress. So many of our LGBT children are hurting and we need not make it worse.”

Similarly, she said, “students, parents, faculty who disagree with policies, regulations, curricula and controversial material should not have to face demonization and name-calling by others.”

The pair were speaking as a precursor to the board voting on Regulation 3009, which establishes an Interdepartmental Review Committee to look at challenged library and instructional materials. It came up during the board’s consent agenda.

For 2016-2017 school year, board members Tammy Derenak Kaufax (Lee), Sandy Evans (Mason), Elizabeth Schultz (Springfield), Ryan McElveen (At Large), Ilryong Moon (At Large) and Jeanette Hough (At Large) each will appoint an individual to serve a one-year term on the committee. Two appointees will serve on the committee reviewing materials in elementary, middle and high schools.

The consent agenda containing this item was passed by the board.

Earlier in the meeting, FCPS superintendent Dr. Karen Garza presented the Opening of Schools report for the 2016-2017 school year.

Garza, who announced Monday, Sept. 19 she would be resigning on or before Dec. 16 of this year, highlighted the more than 186,000 students now enrolled in FCPS and the more than 1,800 new teachers added to the system. She also called out several new and developing initiatives in the system including project- and problem-based learning.

Rather than present a full PowerPoint slideshow, Garza played a video with slideshow highlights, available to view online atat www.youtube.com/watch?v=qWWDimYBTsM&feature=youtu.be.

School Board members say they have just begun to discuss an interim superintendent, but that it’s very preliminary at this time.