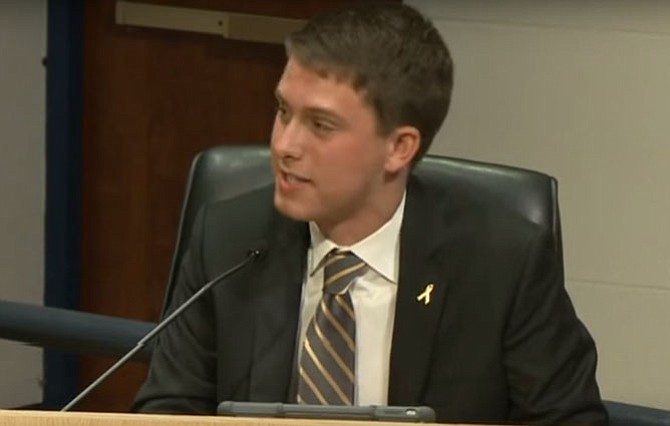 “Your investment in our health paid off, as can be seen in the better-rested faces of thousands of high school students across the county,” said Press, addressing the Fairfax County School Board in his new role as student representative at their Sept. 10 meeting.

“But our work isn’t done yet,” Press continued, “with middle school starting so early, we still have a ways to go until we get this absolutely right.”

When schools re-opened the previous Tuesday, high schools started around eight o’clock rather than seven o’clock, the result of advocacy, community engagement and planning going back several years.

Phyllis Payne of advocacy group Start Later for Excellence in Education Proposal spoke during the citizen participation portion of the meeting, thanking the board members for their work in getting the change accomplished.

“It’s just been great,” Payne said, “hearing all kinds of wonderful things from people I don’t know, people I do know.” She went on to read a handful of glowing comments from parents who said the extra hour in the morning allowed them and their students to be feel better rested, have time to prepare and eat a more nutritious breakfast, and just feel less stressed in the morning.

Steven Greenburg, president of the Fairfax County Federation of Teachers, added that group’s perspective: “The transition to later high school start times went very smoothly,” he said. “Our students will know our focus is our on their care and education — an investment in the future leaders of this community, what’s that worth?”

“We had a community that recognized ultimately that this was important,” said Mount Vernon School Board member Dan Storck. “It really came to light in the last election: Voters spoke and elected School Board members who felt this was an important thing to do. As a result we were able to bring this home.”

For its first meeting of the new school year, the board had no action items on which to vote. However, its new business included introducing appointments for individuals to serve a one-year term on the Challenged Materials Interdepartmental Review Committee. The materials are library or instructional media at elementary, middle and high school about which residents may choose to file complaints.

In her superintendent’s remarks, Dr. Karen Garza praised the school system for a first day that went smoothly and successfully in her view, including the new start times. “I could not be more pleased nor more proud of our wonderful FCPS employees,” Garza said. “We posed this challenge, did it for all the right reasons, and it was a great start.”

For helping pull off the major change, Garza recognized the task force that worked on the project, county agencies and assistant superintendent for facilities and transportation services Jeffrey Platenberg.

“The Police Department stepped up too, set up flashing signs,” Garza continued. “And all the supervisors assigned to schools, greeting kids, it was certainly a goodwill gesture.”

Garza closed by referencing the community engagement meeting being held to discuss the projected $100 million budget shortfall facing the county for Fiscal Year 2017. This week, an online tool went live that allows residents to draft their own budget and submit it for school board members and the budget task force to review.

“We’re all very interested in what the community has to say,” said Garza. “That’s what this entire exercise is about, just allowing the community to have a voice, what they want us to take into consideration as we make these important decisions.”

More information on the Budget Proposal Tool is available online at www.fcps.edu/news/fy2017/budget-tool.shtml.