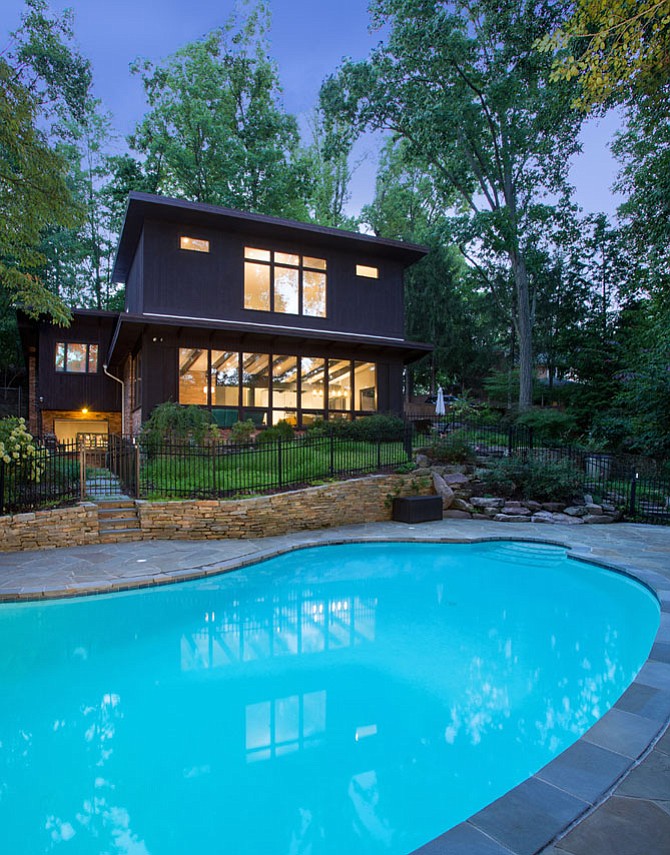 Sun Design Remodeling added a top-level master suite to a lakeside home designed in a classic mid-century modern architectural style, enabling new owners to obtain the square footage needed for their family of four. The 630-square-foot addition affords a “spot-on” view of the lake. Photo by Greg Hadley

After years of searching unsuccessfully for a suitably-sized home on Lake Barcroft, the owners hired Sun Design's Roger Lataille to help them find property that could be adapted to their needs. Among other problems with the existing house, walls separating the kitchen, dining room and living room made the first-level seem boxy, dark and dated.

By removing unneeded walls, the remodeler introduced an “open” floor plan that emphasizes visual continuum and lake-side sightlines. Large format structural beams wrapped in walnut-stained pine present a vivid contrast to the white tongue-and-groove ceiling. The center island surface is waterfall Silestone. The modular track pendant lights over the dining table can be moved as needed.

The steel moment frame (left) specified for the re-designed window wall is the necessary structural component needed to support the upper level master suite — but it also highlights the property's sense of place in a woodland setting beside a lake.

There's something quite satisfying about finally getting exactly what you want after years of anticipation, especially as the holidays roll around.

“I really saw this past Thanksgiving how well our re-designed home fulfills a whole host of plans,” according to the couple, speaking of the completely re-furbished mid-century modern house on Lake Barcroft they recently occupied after extensive remodeling.

Looking back, the owners’ far-reaching “wish list” was never assured. The couple had been looking for a lakeside house for years, but couldn't find anything suitable for a young family with two children just starting school.

Then last year the couple hired design consultant Roger Lataille of Sun Design Remodeling. The task: assess the rehabilitation possibilities of a circa 1950's mid-century modern actually situated on the lake.

Sun Design Remodeling had come with a considerable resume, having renovated some 30 Lake Barcroft residences. Still, at just over 2,000 square feet, the house under consideration seemed too small for the decades of occupancy that may lay ahead.

On the other hand, the waterside view was exceptional, and Sun Design Remodeling offered both an attractive design/build approach and a versatile creative team.

“They wanted a house that would work for them long into the future,” Lataille recalls. “We saw our goal as not only adding usable new space, but enhancing a classic style.”

The house “begged for a bold visual continuum,” the designer said. For instance, the existing interior was formed around a “boxy” floor plan with an enclosed kitchen visually sequestered from the beautiful view, and a wall between the living room and dining room.

The contrast between the old plan and the emerging vision was a textbook case of how “space-use expectations have changed in the American home in the past 25 years” the designer said.

Perhaps not coincidentally, the couple had also gradually concluded that the traditional floorplans such as the one in the Arlington home the couple had previously owned wasted too much space. The front-facing living room was seldom used; ditto the formal dining room.

With the location of the master suite now resolved, the second floor gains re-deployable floor space, gaining a washer/dryer closet off the hallway.

Meanwhile, the most compelling feature in the primary living area is a steel moment frame which replaces the old window wall, and provides the tensile strength needed to support the new master suite.

Overhead, large-format structural beams wrapped in walnut-stained pine present a vivid contrast to the white tongue-and-groove ceiling. Waterfall Silestone counter surfaces and hardwood flooring neutralize, while the mid-century accents of the stools, chairs and even a bright turquoise sectional in the living room present eye-catching intimations of a resurgent American style.

Morgan Hutchinson, Sun Design's specialty designer, said, “Finding a balance that respects a classic style and [the couple’s] personal tastes was the real nature of the assignment. The design explores unique rustic elements along with a new generation of kitchen innovations. The goal was to make a statement that can last, yet be easily adapted.”