Black Friday is Bright at Night in Reston
Votes

Black Friday is Bright at Night in Reston 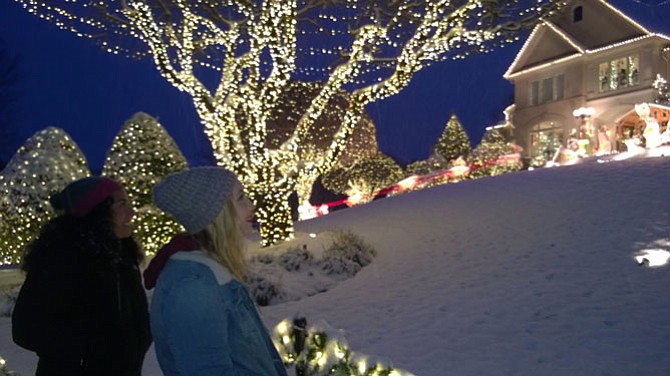 Maria Chavez, 29, of Arlington and Erin McGrath, 23, of Fairfax are enchanted Saturday by a brilliant Christmas light display as snow falls Dec. 9 in Reston at 11303 Stones Throw Drive. Photo by Marti Moore/The Connection 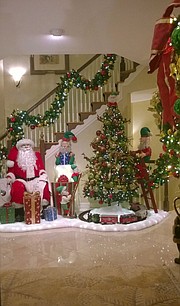 Santa Claus rests in a chair while his elves decorate the Christmas tree in the foyer at 11303 Stones Throw Drive in Reston, where homeowner J.J. Coury uses his outdoor light display to raise funds for the St. Jude Children’s Research Hospital in Memphis, Tenn. 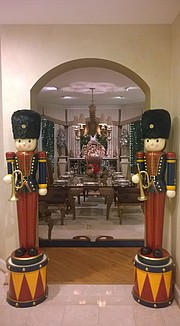 Two life-sized statues stand sentry Nov. 27 at the entrance to the dining room of the Coury family home in Reston. These nutcrackers not only are guardians of the wine credenza but protect an intricate, hand-carved crèche made from a single block of wood homeowner J.J. Coury says he purchased in Italy. 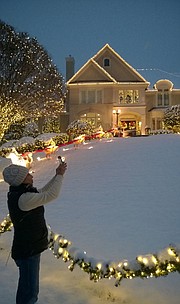 Anna Miranda, 55, of Leesburg takes a picture of an outdoor Christmas light display Saturday on her smartphone as the snow falls in Reston Dec. 9. “It’s gorgeous,” she said.

It’s a bright idea for motorists with Christmas trees tied onto the roofs of their vehicles to stop for a little holiday decorating inspiration from a huge light display at a house just a stone’s throw away from Leesburg Pike and Reston Parkway. A pedestrian walking through the Wyndham Hills neighborhood in Reston calls it “a Christmas paradise.”

For almost two decades, a brilliant house in Reston, just a stone’s throw away from Virginia State Route 7, has delighted visitors at night between Thanksgiving and Epiphany.

The trees surrounding its quiet neighborhood ― tucked in the southeast corner of Leesburg Pike and Reston Parkway ― cannot contain the holiday glow emanating from the dark woods.

Each year, this enchanting scene is so beguiling to some Black Friday shoppers and other motorists headed toward the Reston Town Center ― they take a second glance, continue driving down the road then make a U-Turn at Bright Pond Lane.

These curiosity seekers venture more than a quarter mile out of their way to see what has drawn them back to Wyndham Hills.

They are not disappointed.

ONLOOKERS ARE REWARDED with the sweet sight of 250,000 white twinkling lights that serve as eye candy filling passersby with holiday cheer.

This larger-than-life season’s greeting brings joy … to the world and children of all ages. Three visitors from Mexico were impressed by the wonderful show of lights Cyber Monday evening, when they were driven by Ashburn resident, Teresa Lopez, 52, to the corner of Stones Throw and Fieldview drives.

“I have to show them the dreamhouse,” Lopez exclaims. When her grown children were much younger, she brought them here annually for at least a decade to see this rare holiday gem sparkle in Northern Virginia. “They love to come every year,” she says.

Another lady — Kelly Patino, 21, of Sterling — made the same observation last year on Black Friday. She said Nov. 25, 2016 the Christmas House in Reston was a high-caliber display like Disney World of Orlando, Fla. Her beau, Emmanuel Jiménez, 26, also was in awe as if the scene came out of a movie.

“I have never seen anything like this before,” Jiménez declared. His dad snapped pictures and said “I can look at this for hours.”

“It’s beautiful,” Monica Morales, 62, of Mexico City said Nov. 27. The description of her and Candia’s fellow traveler needs no translation:

“I’ve been doing this since I was 8 years old,” says J.J. Coury, the original homeowner of 11303 Stones Throw Drive in Reston. As the oldest son, he watched his mother raise 12 kids in Pittsburgh, Pa., and inherited her festive flair for decorating — especially during the holidays.

Coury moved to Virginia 40 years ago. Although it took a while, he found the right place in 1999 to launch his vision for a spectacular holiday light display that reflects his elegant style for Christmas décor.

“I knew it was special because I knew it was the Christmas House,” he said. A production this big requires a system for this 63-year-old man, who rallies his decorating team the first week of October, so they can turn on the light display the day after Thanksgiving. Removal and storage of ornaments takes half the time of setup.

“I have my little elves,” Coury admits. “Without them I cannot have Christmas.”

He claims he trained “the best workers on earth” and every year they perfect their scheme. Santa Claus and his sleigh are carried uphill by four prancing reindeer on one side of the front yard. “All is calm, all is bright” by the driveway at the colorful Nativity Scene — as if it was plucked from a popular Christmas carol like “Away in a Manger” or “Silent Night.”

Six years ago, Coury traded his time-consuming strings of miniature incandescent lamps for strands of light-emitting diode bulbs that are more user-friendly. The new white LED source was a game changer that allowed him to take his outdoor art “to a different level.”

It lowered his monthly electric bill, he said, from an extra $1,200 a month to just $300 above his normal energy usage.

Not only was his home a canvas for the idea he pictured, it was a means to raise money for St. Jude Children’s Research Hospital in Memphis, Tenn.

Coury’s common ground with the charity: His family tree is rooted in Lebanon. Hospital founder, the late Danny Thomas — a beloved 20th century American comedian and television entertainer — was Lebanese. According to www.stjude.org, Thomas believed prayer to the patron saint of hopeless causes was the key to his success. For this reason, the celebrity built a shrine in the form of a children’s hospital.

He says it’s an honor to use his Christmas House to lift spirits — and raise funds for the treatment, cure and prevention of childhood cancer and other catastrophic pediatric diseases. Since the hospital opened in 1962, patients and their medical research teams have increased the childhood cancer survival rate from 20 to 80 percent. It has treated children around the world free of charge.

A huge banner at the front of Coury’s corner lot encourages passersby to send the word “LIFE” in a text message to 50333 and donate $10 directly to the St. Jude Children’s Research Hospital.

However, this is the last year visitors far and near can see the bedazzling Christmas light display. Coury recently listed his corner-lot home for sale. His children, now grown, have moved away. Now empty nesters, he and his wife are downsizing.

He says his last year at the Coury Christmas House is an emotional time. Coury hopes the new homeowners will continue his beloved tradition of outdoor Christmas lights.

The good news is most of his holiday decorations are heirlooms for his daughter’s house. Coury says the torch is passed and the family legacy will carry on next year elsewhere in Northern Virginia.