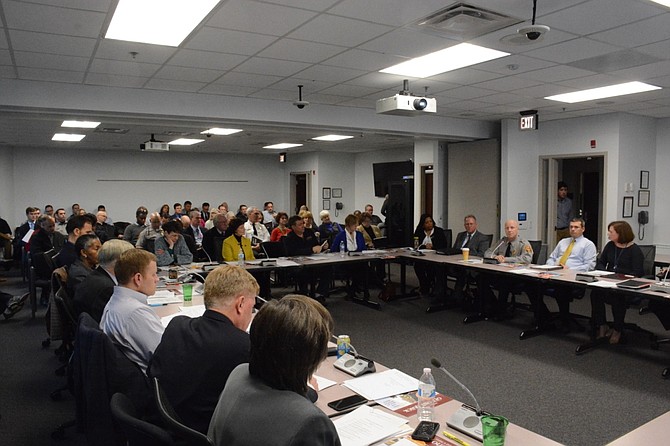 Fairfax County Police Chief Roessler said he has already put out a formal Request For Proposals from vendors in advance of a pilot program. That RFP closes Feb. 28, after which it will take him about two weeks to evaluate the proposals. Photo by Tim Peterson. 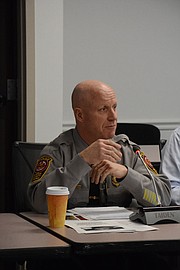 Roessler said he has already put out a formal Request For Proposals from vendors in advance of a pilot program. That RFP closes Feb. 28, the chief said, after which it will take him about two weeks to evaluate the proposals.

He would then come back to the supervisors with specific needs as far as budget and staffing. Once approved, Roessler said, it would take an estimated 90 days to get the program up and running for FCPD.

That would also follow a pilot program, where Roessler said he intends to select two vendors and run trials at two stations in Fairfax County. In 2015, Rossler came before the supervisors with a model policy for implementing body cameras. No action was taken, however, as they decided to wait on legislation working its way through the General Assembly. Then the chief and department were tied up in litigation surrounding the retention of data from license plate readers, he said.

“Clearly things have evolved,” since 2015, Roessler said. To move forward, the chief said he would reconvene the stakeholders who looked at that model policy and make sure it’s up to date for 2017.

Committee chairman Supervisor John Cook (R-Braddock) was adamant there should be an approved policy in place in time to “govern the pilot.”

Among the issues that policy will need to address include how camera recordings will be dealt with in terms of Freedom of Information Act requests, privacy laws and norms, the mental health community and metrics for efficacy and success.

County Attorney Beth Teare explained that the recordings would “clearly be public records,” but there are four circumstances in which disclosing them would be prohibited under state law. Those include instances when an individual’s address or telephone number is visible in the recording, or a victim of a crime involving sexual abuse or assault can be identified.

Some of these cases, Teare said, can be released however at the discretion of the chief of police.

To address mental health concerns, the committee welcomed Jeanne Comeau, president and CEO of the National Alliance on Mental Illness Northern Virginia, and Scott Campbell of the Fairfax County Advisory Committee for Students with Disabilities.

Comeau said there are major concerns with cameras, for privacy and safety both of an individual experiencing a mental health emergency and the responding officer wearing a camera.

There was a question of whether the person who made the call for police assistance would be able to instruct the officer to turn off the camera so as to not further escalate the situation.

“How do we protect them? Family members may not always be present,” Comeau said. “Don’t want to see people be reluctant to call for help. We recognize it’s a complex problem.”

Roessler commented that a further complicating factor is that the majority of use of force cases in Fairfax County stem from mental health-related calls. But greater transparency and accountability related to use of force is one of the issues body cameras are intended to address.

“You don’t know how it’s going to go until it’s over,” Roessler said, acknowledging that making policy on when officers may turn the cameras on or off will be tough policymaking sledding.

But, the chief said, he’s glad Fairfax County is taking the time to have these discussions, as other jurisdictions around the country have rushed into implementing body cameras and seen negative, unintended effects of the hastiness.

“The vision is to have the program, integrated into our dash-mounted cameras program,” Roessler said. “To bring more transparency and accountability by having the cameras on the street.”

The next meeting of the Public Safety Committee is scheduled for March 21 at 10 a.m. at the Fairfax County Government Center, which will be too early for the Chief’s RFP evaluation timeline. It was discussed, then, that he would present on his vendor choices at the June 13 meeting.