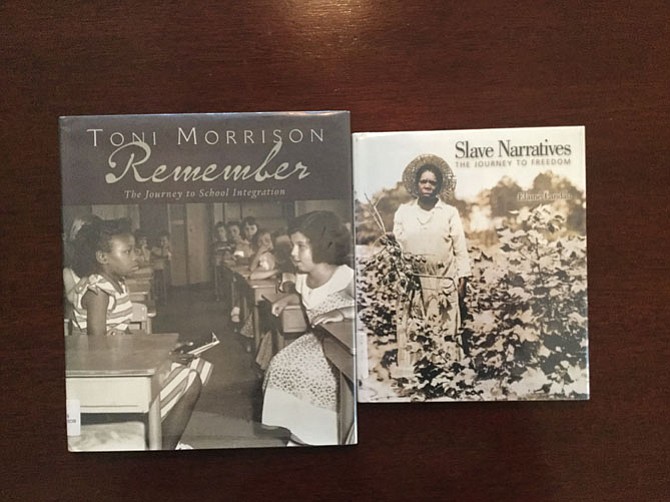 Books that explore African American experiences are on display at libraries and bookstores during Black History Month. Photo by Marilyn Campbell. 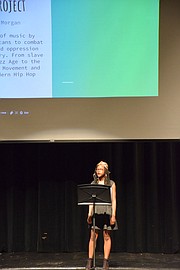 Bullis School student Noelle Morgan '18 performs a spoken-word piece she wrote about how music — from slave songs to jazz and modern hip hop — has been used by African Americans throughout history to combat brutality and oppression.

Bullis School fifth graders Elizabeth Martin and Will Simpson look on as their documentaries about the civil rights movement were presented to the school.

Even though Elavie Ndura knows that it is a daunting challenge to help children grasp the entirety of the African American experience in the shortest month of the year, each February she and other educators give it their best effort. This year, they feel it’s more important than ever.

“With all of the racial experiences we’re having these days, it’s critical that children know their history and are not basing their knowledge on only what they see on television or what they hear from their friends,” said Elavie Ndura, Ed.D., professor of education at George Mason University in Fairfax. “Research shows that children who understand their histories do better in school and in society, so it’s critical that families teach their children about their history,”

Ndura believes that the current racial climate in the U.S. gives this year’s Black History Month additional significance. A study released last month by the Pew Research Center shows that among Americans, 61 percent of blacks, 58 percent of Hispanics and 45 percent of whites say that race relations in the United States are generally bad. Local educators say Black History Month offers opportunities to address issues of race by allowing the past to inform the present.

“We have seen for more than a year how people from different political viewpoints, but also races, sexes, cultures, religions, sexual orientations, and socioeconomic statuses related to each other in the present political climate, and it was troublesome,” said Mika'il A. Petin, Ph.D., associate director of African and African American Studies at George Mason University. “Teaching the history of Black or African-heritage peoples in this month … is necessary to starting difficult conversations about… current race relations … and social inequalities.”

Race relations in our society have been deeply strained during the election and as America adjusts to a new presidential administration. These divisions make African American history lessons critical for all children, but particularly for black children, says Ndura. “As African American parents we have a serious duty to educate our own youth,” she said. “Knowing your history grounds and anchors you firmly so that you are not wavered in the wrong direction because of whatever feelings might be caused by what you’re seeing on the news.”

Black history lessons work best when they're intentional and creative, advises Jessica Lewis, Ed.D., assistant professor of education and human services at Marymount University in Arlington. “Children benefit when they are exposed to a variety of perspectives, ideas and stories because it helps expand their view of the world and people living in it,” she said. “The ability to understand and identify with others and their experiences is a powerful, life-long lesson.”

Lewis advises making a trip to a local bookstore or library to find books that offer a glimpse of African American history and suggests that parents begin with books on subjects that interest their children. “[Parents] may start with readings on sports, or science, or biographies of the accomplishments and hardships of individuals who persisted throughout history to make a difference,” she said. “Parents can … select books by black authors and illustrators and then take the time to read the story together, discuss the pictures, and ask questions about what the characters are feeling and experiencing."

Other ideas include exploring music with roots in African American history such as ragtime, jazz, gospel and blues, making a timeline of major events that occurred during the Civil Rights Movement, and reading speeches from civil rights leaders and then helping children write their own speech about what they are inspired to change in the world. Such activities can open a natural discussion and need not be complicated to be effective, says Lewis.

“Parents are their children’s first educators,” said Lewis. "It is important for parents to help their children understand the experiences of other children who are not like them because it builds empathy and a deeper sense of community."

One roadblock to such honest conversations, cautions Petin, is a discomfort with discussions of racial differences. “Let’s be frank, some white Americans who are politically and socially conservative become noticeably uncomfortable with the topic of race, and therefore find difficulty with Black History Month,” he said. “Yet, Black History Month –– similar to the Black Lives Matter movement –– does not express superiority over others. Both the month of celebration and socio-political movement are forms of resistance to deliberate attempts to conceal the worthiness of Black or African-heritage people in this country.”

Some people “may attack Black History Month and Black Lives Matter as political correctness and identity politics, but I would argue that they are not seeing the humanity in both efforts,” continued Petin. He emphasized the importance of taking a purposeful approach to teaching children about black history. “I think that all parents must intentionally search for, study, and celebrate those who are on the margins, living in the shadows, perceived as voiceless, and regarded as invisible. Too often, black Americans were those marginal, shadowed, voiceless, and invisible people. All parents should be honest about that, and should have confidence in the U.S. only being great when they and their children educate themselves on this country’s history in more inclusive terms.”

Schools often play a significant role in the month’s activities. Students at the Bullis School in Potomac, Md., for example, attend a Black History Month assembly each February. This year’s event was led by several students who shared their thoughts, essays and other projects on a variety of topics. “Diverse literature is always a great idea,” added Allison Ewing, chair of the social studies department at Bullis.

"Twenty-eight days of teachable moments" is one way that Petin characterizes Black History Month. “It is never too early to start preparing your kids for a world that is increasingly more connected and shrinking,” he said. “When all parents teach their children how to develop skill sets to understand, value, empathize, and celebrate those who may be different than them, the children are better prepared to function in the world.”