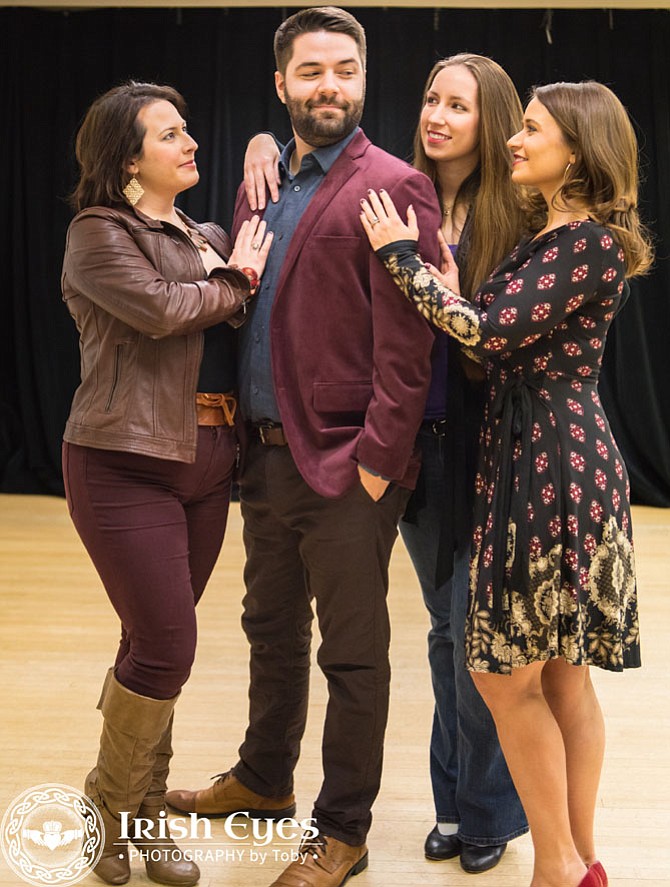 Bobby (Matt Liptak) gets in the middle of a fight between Sarah (Carla Crawford) and Harry (Scott Graham) in a ‘Company’ rehearsal photo. McLean Community Players present ‘Company’ at the Alden Theatre in the McLean Community Center on weekend Feb. 3 to Feb. 19, 2017.

The richly celebrated “Company” is a groundbreaking musical-comedy. It looks into being single, relationships, and marriage as a 30-something man named Robert has major fears of commitment. The musical takes place as he is about to spend quality time with his best friends; five married couples.

In an interview with Veselic she spoke of directing a fresh “Company” for MCP audiences. “This is a new ‘Company’ that will take the '60s mannequin characterizations, and bring them into the present time.

“Every show evolves, changes, adapts and recreates itself within the original script,” said Veselic. “The time period will remain, but the characters are now more thoughtful, sensitive and searching within.”

“In this production, the goal is to give the audience a ‘thinking’ cast of New Yorkers—not the version of the hard, unlikable, bitter characters of the past,” said Veselic.

The Sondheim musical numbers pack a wallop about love lost and life’s uncertainties in both serious and comic manners. The iconic show features Broadway musical standards such as “Getting Married Today," "The Ladies Who Lunch," "Being Alive," and “Barcelona.”

In a recent roundtable interview, MCP performers including Matt Liptak who plays Robert, Cara Crawford, Sharon Grant, Melissa Pieja and Alana Sharp made clear that the personal issues “Company” spotlighted remain; even with the digital world and social media. Finding the “right” person to love, having best friends and a full life all matter.

Both Liptak and Veselic emphasized that the McLean Community Players’ “Company” will be “uplifting for audiences old and new to the show. For those who have seen the show before, the characters will be less cynical and cold. For those who may be unfamiliar with ‘Company’ the characters will be alive, likeable and not merely one-dimensional caricatures.

The evening all begins with a doorbell ring to invite audiences to become best friends with the McLean Community Players’ “Company.”