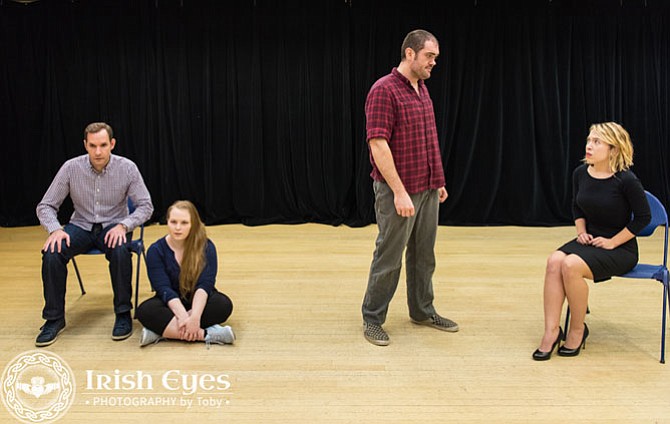 In one room two cops (from left -- Scott Landsman and Lynley Peoples) watch the video of what's happening in the next room with the security agent (Stephen T. Wheeler) and the accountant (Brianna Goode) in rehearsal for the McLean Community Players “Unnecessary Farce.” Photo by Toby Reidway/IrishEyes

Add in there plenty of edible donuts and strategically seen funny underwear very visible on the Alden Theatre stage.

Veteran director Jessie Roberts described “Unnecessary Farce” as “an eight door farce. A barometer for how crazy a farce is should be based on the number of doors in the set. An eight door face is about as crazy as you can get.” She described the MCP cast as “stellar and ready” with the technical artisans as “an imaginative cadre of designer and crew.”

“Unnecessary Farce” takes place in a bargain budget motel. A mayor is suspected of embezzling public funds. He is supposed to meet with his accountant to discuss next steps in the caper. But, two undercover cops have been tipped off and are in the room next store. They are supposed to record the meeting on video tape; then bring the culprits their comeuppance. Well, that is the expectation until everything goes very astray.

Things don’t quite work, as there is oodles of chaos and confusion. The proceedings take on a frantic pace centered upon the two cops, at least three crooks and eight doors. Listening to the production’s cast and crew it was clear they wanted to treat Alden audiences to a frantic muddle of who’s in which room, who’s watching the video, and who really took money. Oh, add in a hit man, and loud noises from crashing doors and other sound effects.

Featured in a many previous MCP productions, Bob Sams plays Mayor Meekly in “Unnecessary Farce.” He called the play “a dynamite, funny play with plenty of laughs and great pacing.” It’s entertainment to just “sit back and enjoy.” Brendan Chaney, playing a Scottish hitman, described the show as “a farce and proud of it. It has plenty of energy and silliness.” Making her MCP debut, Brianna Goode is the Mayor’s accountant who will seem “rather not totally in control of herself. Also even the costumes are funny with a purpose.”

Director Jessie Roberts wanted audiences to know: “‘Unnecessary Farce’ is a joy. We can always use a good farce.”