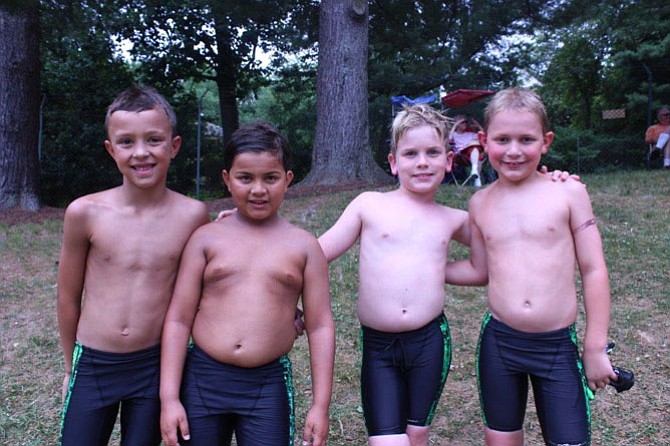 Virginia Run traveled to Donaldson Run at the eastern edge of Arlington County for its second NVSL Division 4 meet of the season. While energized by their Pasta Potluck Pep Rally Friday evening, and wearing red, white and blue to celebrate the July 4 holiday, the Riptide were unable to neutralize the Thunderbolts.

As the relays began, the Thunderbolts had stretched their lead to 20 points and the pressure ratcheting up on the Riptide. The 8&U boys responded with a nail biter of a win with anchor Nick Harris making up a 2 body length gap to win by .17 seconds. The 8&U girls followed with a win, but the Thunderbolts dominated the next five races. The Riptide girls 13-14 relay swam with enthusiasm and won their relay, but alas there were no more wins for the Riptide on the first Saturday in July.

Summer swim is all about fun and friendship, so the Riptide is having a busy social week with a development meet Monday at Pleasant Valley, a “Despicable Me 3” Movie Night Pep Rally on Friday and a Nationals Baseball game on Sunday.