TitleMax, LoanMax and Fast Auto Loans will be able to keep details about their business secret. 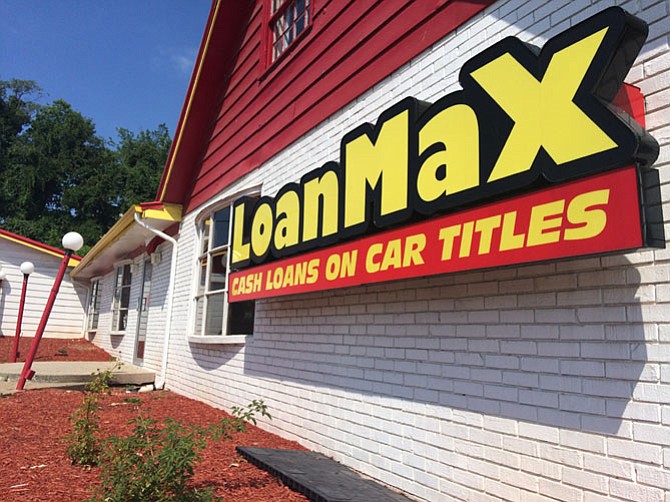 LoanMax is one of the car-title lenders arguing that its annual reports should not be disclosed because they contain “personal financial information.” Photo by Michael Lee Pope.

How many cars did TitleMax repossess last year? What was the average loan amount for LoanMax? How many judgments did Fast Auto Loans obtain against people who were so hard up for cash that they handed over the title to their automobiles? That’s all information that these companies handed over to state regulators last year. But according to a new ruling from the Supreme Court of Virginia, it’s also information that these companies can keep secret. Justices were considering an appeal filed by the Center for Public Integrity, which filed a public-records request with the State Corporation Commission.

“Clearly my client is disappointed in the decision,” said state Sen. Scott Surovell (D-36), who represented the Center for Public Integrity in court. “The Supreme Court seems to have interpreted the State Corporation Commission’s order differently than we did, and they elected to dismiss it on a technicality. That’s disappointing, but that’s what they did.”

The battle for access to regulatory documents is the latest battle in the ongoing controversy surrounding car-title lenders, which charge more than 200 percent annual percentage rates. Recent years have seen a number of news organizations detail how the industry takes advantage of people on the margins of society, including people who are facing serious medical problems or unemployment. Stories have appeared in Connection Newspapers and on public radio, setting the stage for an investigation by the Center for Public Integrity. But when investigators for the Washington-based nonprofit organization tried to get documents car-title lenders filed with state regulators, they ran into a brick wall.

“We get denied records all the time,” said Fred Schulte, who was a reporter for the Center for Public Integrity when it issued the 2015 report. “But it’s pretty unusual for a public official to say there’s nothing in the law that says this is anything but a public record, but we’re not going to give it to you anyway just because we want to satisfy the industry.”

STATE REGULATORS initially notified the car-title lenders that they would be releasing the annual reports because they were unable to identify any legal basis that would prohibit them from treating them as public records. But then the industry struck back. TitleMax, LoanMax and Fast Auto Loans filed separate petitions arguing regulators should not release “personal financial information” about the businesses. Members of the State Corporation Commission considered the public-records request and determined that the term “personal financial information” was ambiguous. They ultimately determined that that the Bureau of Financial Institutions had never released the documents before, and they saw no reason to release them now.

“The bureau’s historical practice has been to treat the specific annual reports as confidential, and there has been no statutory change that would require a change in that practice,” the commission argued in a legal brief submitted in the case.

The question of whether or not TitleMax is protected from public disclosure of “personal financial information” was not resolved by the State Corporation Commission, which decided to rely on its historical practice rather than forging new territory. Likewise, justices on the Supreme Court of Virginia also left that question unanswered. Instead, they dispatched the case on a technicality. The justices concluded that the “assignments of error” the Center for Public Integrity attributed to state regulators did not comply with court rules.

"The case was decided on what some may say is a technicality, not whether the State Corporation Commission’s ruling was correct,” said Jay Speer, executive director at the Virginia Poverty Law Center. "The question of whether the law’s prohibition against releasing personal financial information applies to a corporation trying to keep the public from knowing how many cars it repossesses or how many bad loans they have made will now have to be decided by the General Assembly.”

NOW THAT THE Supreme Court has dispatched the Center for Public Integrity’s case, lawmakers may be more willing to consider legislation outlining how much — if any — information in the annual reports should be considered part of the public record. The State Corporation Commission currently issues an annual report on the industry, which shows how many cars were repossessed by all 26 car-title lending companies. But individual annual reports submitted by TitleMax and LoanMax, for example, remain secret.

“The actual aggregate data is already reported,” said Surovell. “So it’s not clear to me why getting individual data from individual car-title lenders would for some reason prejudice anybody unless they’ve got something to hide.”

Earlier this year, the General Assembly considered more than a dozen bills on car-title lending this year, although none of them made it out of committee. Instead lawmakers created a special work group to consider possible solutions to be considered next year. The work group is considering a number of issues related to predatory lending, including bait-and-switch behavior of some car-title lenders offering more than one kind of lending product and unregulated loans made online.

"We could change the law, and we should,” said Del. Mark Levine (D-45), a member of the work group on predatory lending. "But I think the Supreme Court got it right in this case — at least with regard to the statutes cited by them. There is no requirement to release this information.”