Following the Money from High-Interest Lenders to Virginia Lawmakers
Votes

Following the Money from High-Interest Lenders to Virginia Lawmakers 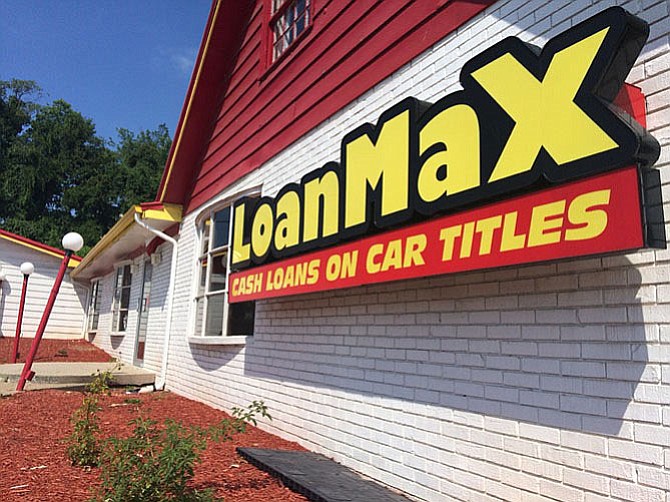 LoanMax is the most generous contributor of the high-interest loan industry, donating $350,000 this election cycle. Photo by Michael Lee Pope.

Recent years have seen increased scrutiny of high-interest lenders, businesses that offer a variety of loans at interest rates that often exceed 300 percent. Now campaign finance disclosures show the industry is spreading its influence across the political spectrum with more than $800,000 in political contributions this election cycle according to data from the Virginia Public Access Project. The campaign cash is coming from car-title lenders, internet lenders and businesses that offer a virtually unregulated kind of loan known as an open-end line of credit. All of the businesses have opposed efforts to create new consumer protections or limits to the amount of interest they can charge consumers.

“There’s no question that people give money with purpose with intent," said Bob Denton, political science professor at Virginia Tech. “They’re not giving because they feel good or because they’re being nice.”

Georgia-based LoanMax is the most generous of the pack, forking over about $350,000 this election cycle. Check Into Cash, which offers open-end lines of credit, gave $125,000. Both of those businesses have been top contributors for years, helping push back efforts to reform the industry. Recent years have seen internet lenders like Chicago-based Enova contributing to elected officials. This election cycle, for example, Enova gave $30,000.

“Whether that’s a small contribution or a large one,” said Denton, "there’s a correlation between motive and giving that money.”

CAMPAIGN FINANCE RECORDS show the industry targets House members who are on a special subcommittee that routinely kills any effort to reform the industry: The Commerce and Labor Special Subcommittee on Consumer Lending. High-interest lenders made contributions to members of the subcommittee, including Del. Jackson Miller (R-50), Del. Kathy Byron (R-22) and Del. Lee Ware (R-65). Top dollar amounts went to Del. Tim Hugo (R-40), who received $15,000 from LoanMax and another $15,000 from Check into Cash.

“I hate to be cynical about this, but industries that want to get bills passed or killed will often target the members that serve on the committee that oversees their business,” said Del. Mark Keam (D-35), the only Democrat on the subcommittee. “And they’ll give to the party that helps them a lot more than the party that hurts them.”

Records show that Keam did not receive any money from the high-interest lenders, although he said he would probably take it if they offered it. Then he would vote against the industry, which he sees as predatory. Republicans, on the other hand, say they believe in a free-market approach. So the industry is essentially investing money in people who agree with them, even if it’s also spreading campaign cash to key members in a key position to head off reform efforts.

REPUBLICANS RECEIVE the lion’s share of the campaign cash from high-interest lenders. But the industry is an equal opportunity contributor, giving to Democrats as well as Republicans. LoanMax, for example gave $10,000 to Republican candidate for governor Ed Gillespie. But the company also gave $10,000 to Democrat Ralph Northam, essentially hedging its bets on which candidate might win in November.

“This is a way that makes sure that whoever wins the election, they win the election,” said Stephen Farnsworth, political science professor at the University of Mary Washington. "You’ve covered all the bets on the table here. So whether there’s a Democratic or Republican governor, you’ve still got a ready audience for your issue.”

But LoanMax was not indiscriminate in its contributions. The company donated $10,000 to Republican candidate for attorney general John Adams. But it did not give to Democratic incumbent attorney general Mark Herring.

MOST OF THE MONEY goes to political action committees, which slosh money through the system in ways that often make it untraceable. For example, LoanMax gave $32,500 to a Democratic PAC known as the Commonwealth Victory Fund, which gave $60,000 to the House Democratic Caucus, which gave money to Democrats in tight races. The PAC also gave money to the Democratic Party of Virginia as well as contributions to specific candidates.

“There’s something sinister here,” said Kidd. "It’s a way to pass money through without it being directly tied to a particular industry or a particular corporation.”

Check Into Cash gave $13,500 to Republican Speaker Bill Howell’s PAC known as Dominion Leadership Trust, which gave $35,000 to Del. Jim LeMunyon (R-67) and $15,500 to Republican candidate Lolita Mancheno-Smoak. Some of the contributions happen after the election cycle but before the General Assembly session. For example, TitleMax has given $73,500 to CommonSense VA, which cut a $25,000 check to Hugo a few days after the 2015 election. Kidd says giving to PACs is a way to make following the money more difficult.