A National Memorial for Suffragists
Votes

A National Memorial for Suffragists 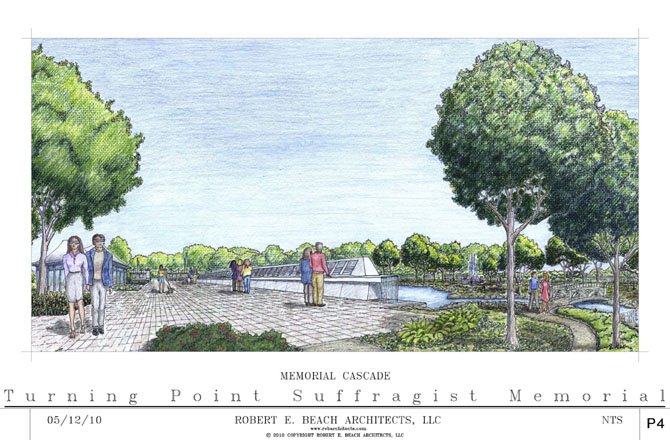 Not far down the road from where suffragists were imprisoned at the Occoquan Workhouse for picketing at the White House for the right to vote, members of the Turning Point Suffragist Memorial Association, in partnership with the Northern Virginia Regional Park Authority, are continuing efforts to build a memorial at Occoquan Regional Park to honor those women.

The park currently has a small display that honors women who fought for the right to vote, but the Turning Point Suffragist Memorial Association aims to build a large memorial, complete with gates resembling those at the White House, replicas of the suffragist banners, a waist-high wall that features plaques with the name of every imprisoned suffragist, a footbridge, a waterfall, and 19 informational plaques that detail the history of the women’s suffrage movement.

According to Hybla Valley Resident Emily McCoy, who is chair of the Turning Point Suffragist Memorial Association, the memorial hasn’t been built yet because the group is continuing to raise funds, amounting between five and seven million, to build the memorial. The group also had to wait for the completed Occoquan Park master plan.

"We started planning before the master plan of Occoquan Park was completed. It’s very good that they are redoing it as we are planning to put this memorial in. It’s been a lack of funds, but also waiting for the park to get their master plan done as well," McCoy said.

PAUL GILBERT, executive director of the Northern Virginia Regional Park Authority, finds it remarkable that such major historic events occurred in the area.

"One of those major events that most people do not know about was the great sacrifice that the women suffragists made at the Occoquan Workhouse prison. Their determination directly led to the right to vote for all women. Because of this important history, we are very excited that a fitting memorial to the suffragists will be a central feature of Occoquan Regional Park in the coming years," said Gilbert.

The goal is to have the memorial completed within three or four years, McCoy said.

According to McCoy, Occoquan Regional Park is a prime location for a national memorial, not only because it is near the location where the suffragists were imprisoned, but because of the area’s other historic sites.

"It’s a suitable location. The NVRPA very much wants the memorial to be in the park. It’s nearby, as opposed to putting it in D.C., and as opposed to some other location. If you think about it, it’s close to Mount Vernon and Gunston Hall, and other historic sites, as well as the Lorton Arts Foundation Workhouse Arts Center," McCoy said.

McCoy believes the memorial will be a complementary venue to the Workhouse Prison Museum at the Arts Center, which she said will eventually be connected by a walkway.

Many of these suffragists imprisoned at the Occoquan Workhouse went on a hunger strike in 1917 to protest their incarceration, and were force-fed.

McCoy said that suffragists were sent to prison and treated in such a degrading manner in an attempt to break their spirit.

"Lorton workhouse was considered where the worst prisoners went," McCoy said. "The women were sent there to clearly to break their spirit, but it backfired. The women were too strong."

THE MEMORIAL’S INFORMATIONAL DISPLAYS will start off in the colonial era, detailing women’s rights at that time, and will include information on Alice Paul’s attempt at an Equal Rights Amendment.

"It’s an extraordinary accomplishment and it’s one that is not recognized, but it should be. It’s one that should be inspirational to anyone with a cause," McCoy said.

Lynne Garvey-Hodge, a Clifton resident who performs re-enactments as Mrs. Robert Walker, is a founding member of the Turning Point Suffragist Memorial Association and believes that women have made progress, but that the suffragists are not recognized as often as they should be.

"We certainly have made progress in that we can all vote, although women don’t turn out to the polls as much as I wish this we did," she said.