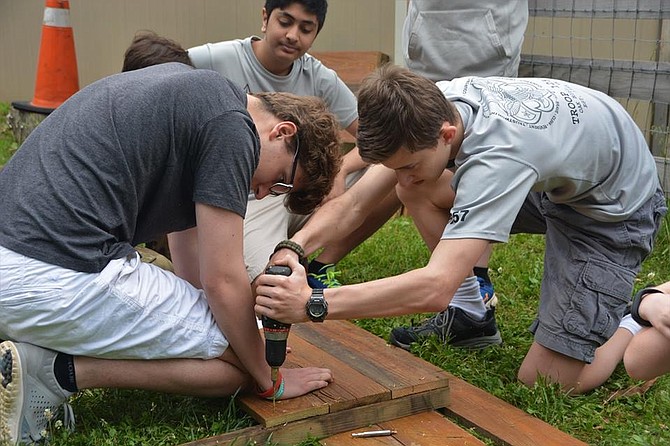 Scouts with the Boy Scouts of America Troop 1257 of Oakton helped Alexander Yusman, 13, of Herndon finish his service project — planting herb gardens — at the Fairfax County Animal Shelter on Sunday, May 21. Photo courtesy of Amy Yusman

Alexander Yusman, 13, of Herndon shows his herb garden service project at the Fairfax County Animal Shelter to Cynthia Sbrocco, the shelter’s volunteer coordinator, on Sunday, May 21.

Scouts with the Boy Scouts of America Troop 1257 of Oakton helped Alexander Yusman, 13, of Herndon finish his service project at the Fairfax County Animal Shelter on Sunday, May 21.

Alexander Yusman, 13, of Herndon has done something that will help feed small and orphaned animals in Fairfax County.

Yusman, a Scout with the Boy Scouts of America Troop 1257 of Oakton, built three herb gardens for the Fairfax County Animal Shelter.

“He actually built three raised beds and a small bench for someone to sit down there and pick the vegetables,” said Cynthia Sbrocco, volunteer coordinator for the FCAS. “It is right next to our barn that houses some of the animals that are recipients.”

It was an easy decision for Yusman to focus his service project to benefit the animal welfare community.

“I have three dogs and they’re all rescues from shelters, so I really wanted to give back to shelters,” Yusman said.

The three herb gardens are 5-feet-by-2-feet and sit about one foot off the ground and contain lavender, dill, sage parsley cilantro and basil, according to Yusman.

Home Depot donated most of the dirt for the project and the wood was donated by a local fencing company that was replacing a neighbor’s fence as part of the company’s upcycling program, he said. All of the herbs were also donated.

Yusman was able to precut the wood beforehand, so the installation only took one afternoon with the help of his Scouting friends on Sunday, May 21.

THE IDEA stemmed from a need the shelter advertised to visitors and volunteers.

“We have a refrigerator in the small animal room that we’re always asking people to bring in fresh greens and he actually came up with the idea of doing a garden for the greens,” Sbrocco said. “The work was all done by Scouts and family members and volunteers who assisted him with the project.”

Yusman also attributes his motivation to a little bit of brotherhood rivalry.

“When I joined Boy Scouts, I wanted to go through the ranks quickly,” he said. “I picked the Fairfax County Animal Shelter specifically because of my brother,” he added. “He actually did his project at the shelter also two years ago, so I felt like I should help them out too and carry it on.”

Yusman, who is a Life Scout, and is working towards his Eagle Scout badge and rank, which is the highest achievement attainable in the BSA program. He began planning and working on the service project component required for the rank while he was in eighth grade at Rachel Carson Middle School in Herndon. His older brother, Benjamin Yusman, earned his Eagle Scout rank when he was a sophomore in high school in 2015.

“He kind of like set the bar for me and he is who I look up to Scouting-wise,” he said.

But Alexander hopes to earn his rank while he is a freshman in high school.

Sbrocco spoke highly of the Yusman brothers and their contributions.

“They took care of all of the details and all of the organization, and we just get to sit back and reap the benefits of their work,” Sbrocco said. “We’ve had other Eagle Scout projects come here and do something, but both boys have done outstanding work and it’s for things that we really needed.”

The latest Yusman family project will help feed the small animals at the shelter.

“It’s mint and basil and dill that can be fed to Guinea pigs and rabbits and ferrets and they love it,” Sbrocco said. “We’re able to go down there and pick those things and then feed them to our small animals and not have to buy them.”

Yusman and his family were able to feed some of the herbs to the Guinea pigs and the rabbits a week after the gardens were installed.

“It’s just invaluable because it’s a steady source of greens for our small animals,” Sbrocco said. “Rather than people having to go buy them and go bad quickly, we’re able to just go out all summer long and get fresh produce.”

TIME IS TICKING on whether Yusman will meet his goal of besting his brother’s timeline.

The beneficiary and leaders of Yusman’s troop will decide if the project has met the standards of an Eagle Scout service project.

“I have to get all of the Eagle-required merit badges, which I have two more that I need to get before I can actually apply for the rank of Eagle,” he said.

He also needs to earn the Personal Fitness merit badge, which requires Scouts to get a physical examination and dental examination by their health care practitioners; complete aerobic fitness, flexibility and muscular strength tests; learn about career opportunities in personal fitness; complete a body composition evaluation; and outline and complete a comprehensive 12-week physical fitness program. This badge is not required if the requirements go against the Scout’s religious convictions.

“They’re also the most time-consuming ones,” Yusman said. “I’m hoping to complete them by October.”

After this is done, the final decision is determined by a committee formed by parents and leaders of his troop, including his Scoutmaster and leaders from the troop’s BSA district, who will question him during a panel interview.

“I have to answer questions that they ask and tell them why I deserve to be an Eagle Scout,” he said. If he makes it this far, the recommendation then goes up the ranks of the national BSA to be approved.

The Fairfax County Animal Shelter, located at West Ox Road in Fairfax, is the only publicly-funded municipal shelter in the county that accepts all animals in need, regardless of age, health or temperament, according to Cynthia Sbrocco, a volunteer coordinator for shelter. This includes dogs, cats and small companion animals. Any animal that is healthy or able to be rehabilitated is placed in an adoptive home, a foster home or with one of the shelter’s rescue partner organizations.

Animals are never euthanized due to lack of space and there are no time limits for adoption. However, euthanizations do occur at the shelter with cats and dogs that are highly aggressive or have bitten people and are deemed a threat to public safety.

In 2014, the shelter received the Compassion Award from the Virginia Federation of Humane Societies for its work to reduce unnecessary euthanasia. The VFHS also awarded the shelter with its Advocacy Award this year for its contribution in exposing the Dreamy Puppy pet shop in Chantilly for selling puppies to the public with serious health issues that were caused by inadequate care and irresponsible breeding. The shelter helped rescue 46 puppies from the company, which closed its Chantilly and Fredericksburg stores shortly after the seizure.