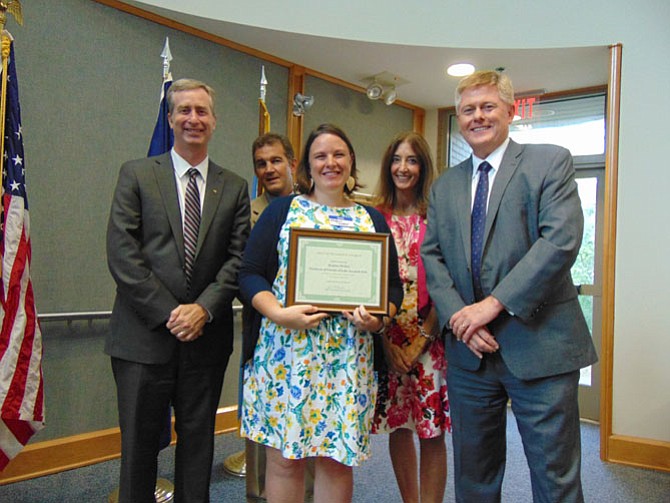 Meghan Walker of Springfield has been honored as Citizen of the Year in annual Best of Braddock Honors and Picnic on Wednesday, July 12. Pictured with Walker are David Bulova, Chap Petersen, Eileen Filler-Corn, and John Cook. Photo by Steve Hibbard.

Most Can-Do Public Employee — Suzanne Metz of Springfield, a physical education teacher at North Springfield Elementary School, organized the "Walk to School Day" (she dressed up as a safety cone). During National Bike to Work Week, she organized a "Bike to School Day" in which over 40 students participated. She is also the director of the annual fifth-grade play, rallying volunteers to assist with sets and props. This year, she has been instrumental in working with the PTA to establish a physical education-themed summer camp where every slot was filled. Pictured are Suzanne Metz with David Bulova, Chap Petersen, Eileen Filler-Corn, and John Cook. 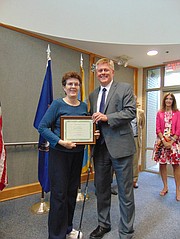 Morton Berger, who died in March, was given a posthumous special recognition for his VIPS (Volunteer in Police Service) participation where he volunteered thousands of hours to take pictures of numerous police activities for the Fairfax County Police Department. Accepting in his honor was his wife, E.C. Buckminster, pictured with Braddock District Supervisor John Cook.

Irene Merrill of Annandale was honored for continually improving the “Briarwood Court News" newsletter for the Briarwood Court Condominiums for over 10 years. The residents are so thankful for her efforts, which help keep the community informed. Pictured are David Bulova, Chap Petersen, Eileen Filler-Corn, Irene Merrill, and John Cook.

Young Person of the Year — Kiley Foster is a rising second-grader who has volunteered with "Girls on the Run" events and participated in clean-up days at Lake Accotink. The activity that has meant the most to her was when she and others at her church made Christmas ornaments and cards for service members overseas, one of whom was her cousin. Pictured are Kiley Foster with David Bulova, Chap Petersen, Eileen Filler-Corn, and John Cook.

Young Person of the Year — Katie Pope has an impressive record of community service to a number of civic, church, and charitable organizations. A student at Annandale High School, she’s worked with younger children at her church’s annual Easter Egg Hunt, assisted with the beginning swimmer's program at the local pool, volunteered at community clean-up days, and participated in a renovation project at her church. This last activity has kindled a desire to work with Rebuilding Community, which she did this year, and Habitat for Humanity in the future. Pictured are Charlotte Moore (in place of Katie Pope) with David Bulova, Chap Petersen, Eileen Filler-Corn, and John Cook.

Club or Organization Making a Difference in Braddock District — The Friends of Lake Accotink Park (FLAP) takes responsibility for supporting all of the numerous upkeep activities necessary to maintain the 493-acre park. They can be found assisting with the annual Cardboard Boat Regatta, helping with boathouse maintenance, and advocating for funding for the parks. They are an important part of the bi-annual park clean-up days. They have originated an effort called “Raiders of the Lost Trash,” where they take canoes out to retrieve trash along the lake shoreline in places that are difficult to reach by foot. They provide cultural as well as environmental support and are in the process of developing a Historical Accotink website.

Enhancement or Beautification in the Braddock District — "Gardening Friends of Kings Park Library" — Norene Gerstner is an avid gardener who has served the Braddock District for 21 years as a volunteer working at the Kings Park Library. She has been a leader in conceptualizing and implementing the one-of-a-kind garden surrounding the library along with her group, which includes Helen Critchfield, Irene Powers, Linda Wirth, Juvy Flor Chaney, and Bruce Wallachy. Gerstner, who was recognized in 2003 for her efforts, will be retiring this year.

Highlighting the unique contributions of his constituents, Braddock District Supervisor John Cook and the Braddock District Council held the annual Best of Braddock Honors and Picnic on Wednesday, July 12, at his office on Burke Lake Road in Burke.

For the picnic portion before hand, about 50 constituents feasted on catered barbecued pork, chicken, and brisket from Red, Hot and Blue, and chatted with their local leaders, including Supervisor Cook, state Sen. Chap Petersen (D-34), Del. Eileen Filler-Corn (D-41), and Del. David Bulova (D-37). Afterwards, the Best of Braddock Honors were held where Girl Scout Troop 1795 presented the Color Guard and recited the Pledge of Allegiance. The names of the award winners were entered into the Congressional Record by U.S. Rep. Gerry Connolly (D-11) as well as the state record in Richmond.

Honorees not attending the ceremony included Jeremiah Bethea, who was honored for being an all-conference, all-regional, and all-state pole vaulter at Annandale High School, and Kyle Gatesman (Young Person of the Year) who has excelled in numerous areas related to math, science, computer science and music.

Among those honored: Morton Berger, who died in March, was given a posthumous special recognition for his Volunteer in Police Service (accepting in his honor was his wife, E.C. Buckminster); Young Person of the Year Katie Pope for an impressive record of community service to a number of civic, church, and charitable organizations; while Irene Merrill of Annandale was honored for continually improving the “Briarwood Court News" newsletter.

Meghan Walker of Springfield Named Citizen of the Year

She has also invested time in maintaining close professional contact with Braddock District Park Authority Board Member Anthony (Tony) Vellucci, various Park Authority staff such as Lake Accotink Park Supervisor Julie Tahan, fellow Friends groups such as Friends of Accotink Creek (FACC) and Friends of Long Branch Stream Valley (FLBSV), and a number of community association presidents to advance causes within Lake Accotink Park for both the park and FLAP.

And during this time she also served as the Treasurer of the Danbury Forrest Community Association, where she helped to secure DFCA approval of an easement for the Park Authority to construct a switchback trail that spanned both DFCA and FCPA property rectifying an unsafe trail access to Lake Accotink Park. She spoke on behalf of the community association at the ribbon-cutting ceremony.

She has judged cardboard boats and dog costumes for Park Authority events. She has provided significant inputs to the master plan process; and she has been a substitute host/master of ceremonies during the Park Authority’s Summer Entertainment Series Braddock Nights at Lake Accotink Park.