Credit Union makes one of their largest donations to five community partners as part of 70th anniversary celebration. 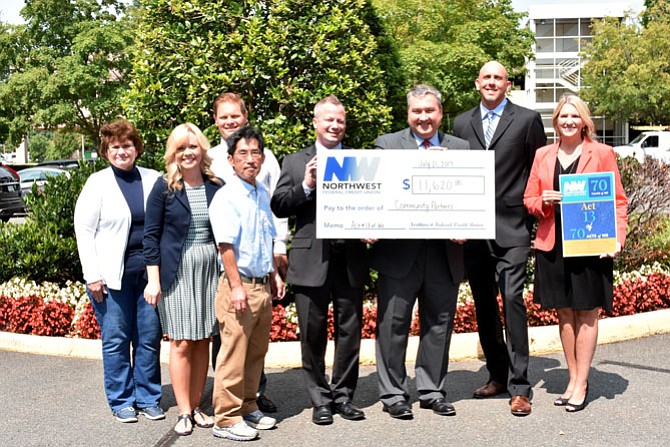 As part of their 70th-anniversary celebration, Northwest Federal Credit Union (NWFCU) presented one of their largest donations to five charitable organizations. On Friday, July 21, NWFCU held their Community Partner Check Presentation at their national headquarters located at 200 Spring St., Herndon. On behalf of 166 members who financed their new home loans through NWFCU between March and June 2017, NWFCU donated more than $12,000 distributed among five community partners.

During the check presentation, Jeff Bentley, Acting CEO/President of Northwest Federal Credit Union explained that as part of the organization's 70th-anniversary year, NWFCU wanted to give back to communities they served.

"Through our 70 Acts of We, NWFCU has been able to collect food and clothing for individuals in need, care supplies for animals in need, and donate funds for organizations such as Special Olympics and the Humane Society," Bentley said. "We want to make a positive impact on our community and those we serve, and we thank you for the opportunity to do so through our partnership with you, our community partners."

Fletcher Wells, Vice President, Resource Development of Cornerstones, an organization that promotes self-sufficiency by providing support and advocacy for those in need of food, shelter, affordable housing, quality childcare, and other human services, said, "A large part of providing hope is housing to individuals and families… NWFCU's support represents a quarter of a year of housing for a family of four."

Jason DiMambro, community outreach manager of Arts Herndon, said, "Generosity and sponsorships like this make it possible for our art programs and scholarships to continue. Arts Herndon will continue to grow the arts in Herndon, thanks in part to relationships like this one."

To learn more about Northwest Federal's “Acts of We,” visit www.nwfcu.org/70.