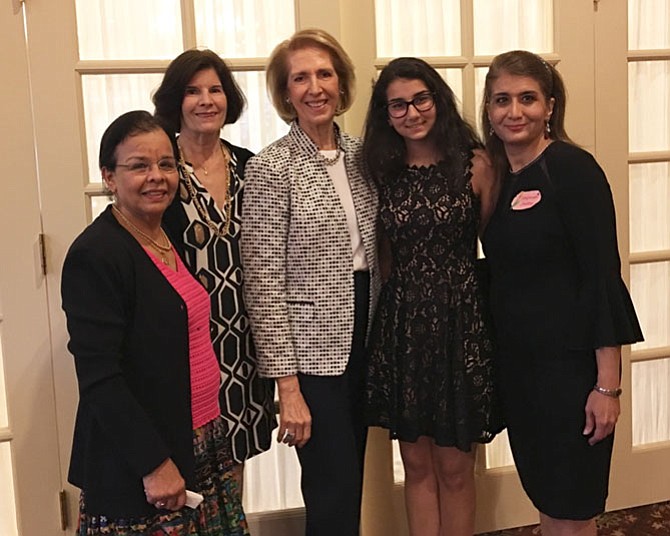 The McLean Area Branch of the American Association of University Women (AAUW) awarded Rose Rasty, a junior at George C. Marshall High School, the 2017 STEM Excellence Award at the AAUW Branch Annual Dinner, May 25. Rasty spoke to the group about her project after receiving a certificate and $100 award.

This year’s award recognized the work done by Rasty on the project, “Optimizing Oil Spill Remediation Using Ferrofluid and Algae.” She demonstrated creativity in looking for a solution to cleaning up the environment after an oil spill.

A year ago, Rasty worked with a species of algae responsible for harmful algae blooms and came across recently published articles that described how algae could be used to break down hydrocarbons in oil. She also investigated the properties of ferrofluid that can extract oil with the use of a magnet and was able to devise a method of combining these two extremely different remedies to apply them to cleaning up oil spills. She credits both teachers and her parents for providing guidance and support throughout the course of her project.

Rasty’s project finished in first place at Marshall High School’s Science Fair, and at the Fairfax County Regional Fair held in March, she was recognized as a Grand Prize nominee. She also took third place in States Science Fair, and her work has been recognized by the MIT Club of Washington and the Stockholm Water Prize.

For more information on the American Association of University Women and the McLean Area Branch, visit the AAUW McLean Area website at mclean-va.aauw.net.