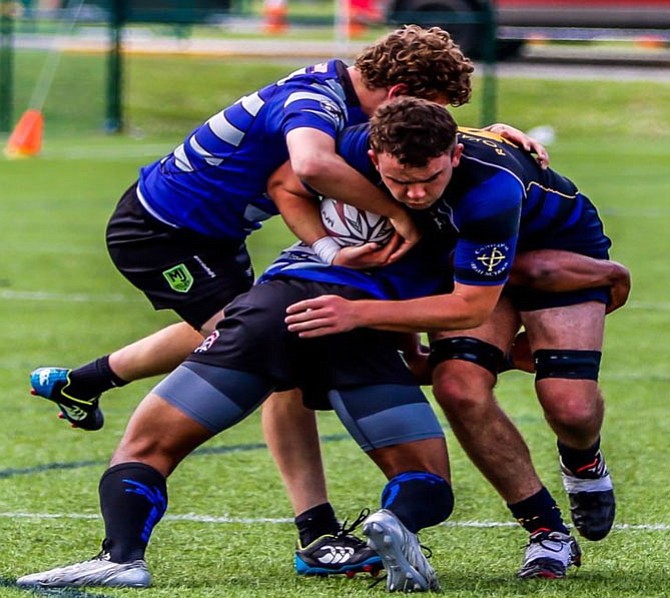 Mount Vernon — On May 17, the Fort Hunt Warriors traveled to Kansas City, Mo., to

participate in the invitational Boys National High School Rugby Championship tournament. Despite a stellar spring season, they fell in the final to Royal Irish (Indiana), 18-16.

The Warriors Brought a 17-2 record into the tournament, including a 5-0-0 grand slam of the inaugural Mid-Atlantic Premier League, a new boys high school league made up of teams in Virginia, D.C., and Pennsylvania, including perennial national rugby powerhouse Gonzaga College High School. The Warriors also went undefeated in Rugby Virginia, winning their fourth state championship in six years on May 13. For much of the spring season, the Warriors were the top-ranked high school club rugby team in the United States.

In the national championship quarterfinals, the #1-seeded Warriors faced the Elsie Allen Lobos out of California’s Central Valley. The Warriors took a while to find their footing but finished the game with a 40-13 win to advance to the tournament semi-final. In the semifinals, the Warriors faced another California team, defending national champions Granite Bay. The game was hard and fast from the opening kickoff, but true to the game plan the Warriors scored early and first, played strong defense and held Granite Bay for a final score of 10-8.

The Warriors came out hitting hard and dominated the first half, forcing the Royal Irish to defend their goal line repeatedly. The Warriors took the lead early on a bruising try by prop Bailey Iboleon. Even when the Royal Irish regained their composure in the second half, the best they could do was to tie the score at 11, only to see the Warriors to pull ahead 16-11 on shifty run by fullback Daiimon Cleveland. Unfortunately, with 90 seconds left in the match, the Royal Irish drove to the Fort Hunt goal line and scored to tie the game at 16. Royal Irish made the difficult conversion from the sideline, and the Warriors ran out of time, defeated 18-16.

Despite the loss in the championship match, the Fort Hunt Warriors returned to Virginia as the national high school rugby runner-up. Captain Sean Dowling said: “This year was the culmination of four years of hard work for the seniors; we had set a goal as freshmen to win the national championship. Although we came up just shy of that goal, we earned the respect of the U.S. rugby community and cemented ourselves as a team capable of winning a national championship year in and year out.”

After the tournament, seven Warriors players were named as players of the tournament: flyhalf Robert Figley; center Erik Roach; wing Andrei Golding; prop Sean Dowling; lock Zack Monson; flanker Jack McCrossin; and #8 Dan Trump. In all, 13 current Warriors players have been selected for representative sides, the East Coast U-19 team and the national U-19 and U-20 teams.

The Warriors, a club sport established in 2011 as part of the Fort Hunt Youth Athletic Association, draws players from 11 high schools across northern Virginia, including West Potomac High School. In addition to their recent national success, the Warriors' varsity team has a cumulative record of 91-15. The team includes a 1st side, a 2nd side, and a JV side. It is open to all high school students, no experience required. More information at www.forthuntrugby.org.