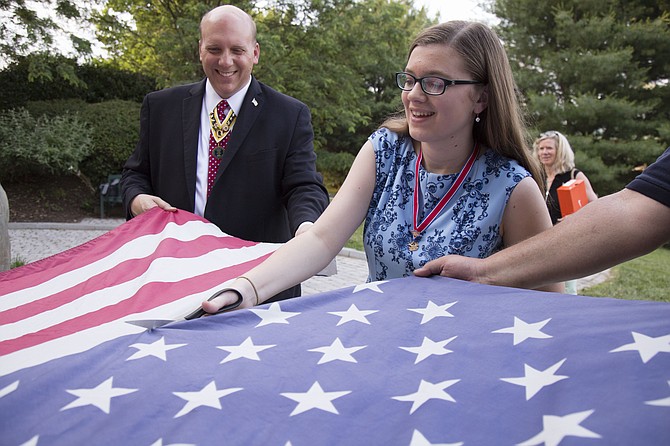 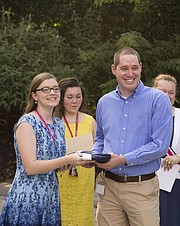 President of the Virginia Society of the Children of the American Revolution Emily Elston, 16, of Woodbridge presents a new U.S. flag to James Cullen, the Great Falls Library assistant branch manager.

Abigail Wilkenfeld, 5 (left), and Rebecca Wilkenfeld, 9 (right) carry an American flag for retirement to Frank Smith of the Great Falls Volunteer Fire Department to burn in a barrel. Smith has been helping control the fire for the annual ceremony for 14 years.

At the time, the flag only had 13 stars to represent 13 states. More stars were added to the flag after the U.S. earned independence and new states entered the union, according to the National Constitution Center.

“I like to teach the kids how to properly dispose of the flag,” said Emily Elston, president of the Virginia Society of the Children of the American Revolution. “Respecting the American flags at their end creates more respect for them when they’re flying on the pole.”

The rules for handling and displaying the American flag are defined by a law known as the U.S. Flag Code, which is found in Title 4 Chapter 1 of the U.S. Code. The law states that when a flag is “in such condition that it is no longer a fitting emblem for display,” it should be “destroyed in a dignified way, preferably by burning.”

However, many of the flags could not be burnt during the ceremony.

This is because American flags were traditionally made out of natural materials like cotton and wool; however, synthetic materials like nylon and polyester are becoming more common. These release toxic chemicals when burnt.

“The flags represent all of the men and women who have served our country,” said Michael Elston, president of the Virginia Society of the Sons of the American Revolution and Emily’s father. “By respecting the flag, you respect their commitment and service as well. It’s no coincidence that we conduct the ceremony at this place where we honor men and women who have given their lives.”