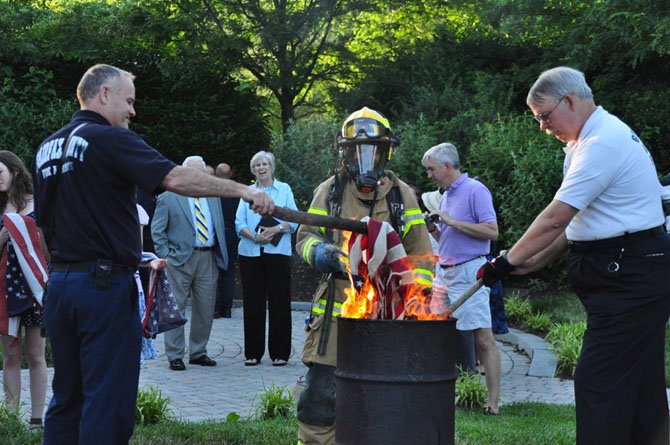 While the burning of the American flag is often used as a form of protest or rejection of what it stands for, the United States Code also says that burning is the proper way to dispose of damaged or worn flags.

Title 36, Chapter 10, Section 176 of the code reads, "the flag, when it is in such condition that it is no longer a fitting emblem for display, should be destroyed in a dignified way, preferably by burning."

With that in mind, the Children of the American Revolution held their 10th annual Flag Retirement ceremony Friday, June 14 at the Great Falls Freedom Memorial. The date also marked the 236th anniversary of the adoption of the flag by the Second Continental Congress, which is now celebrated as Flag Day. 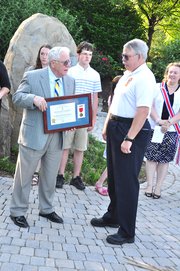 From left, Vernon Eubanks of the Sons of the American Revolution presents Great Falls Volunteer Fire Chief Frank Smith with a plaque thanking them for participating in their annual flag retirement ceremony for the past 10 years.

"We started this ceremony on the far corner of the parking lot in the Great Falls Library as a way to properly dispose of these flags," said Larry McKinley, vice president general of the Sons of the American Revolution, and a resident of Great Falls. "But the parking lot began to fill up with people using the nearby field, and the Friends of the Freedom Memorial offered the use of the plaza to us, which we felt would be very appropriate."

More than 60 flags were retired during the ceremony. Some were large flags that had been flown over homes, businesses and other buildings, while others were from the graves of American war veterans dating all the way back from the American Revolution.

John Sinks, a member of the Fairfax Resolves chapter of the Sons of the American Revolution, brought in flags that had adorned the graves of his ancestors that fought in the Revolutionary War, War of 1812 and Civil War, which have since been replaced with newer flags.

Firefighters from the Great Falls Fire Station assisted with the ceremony, with firefighter Liezel D’souza donning her fire suit and safety gear to feed the flags into the flames.

While the nylon and other synthetic flags melted quickly, firefighters took care to make sure the cotton flags, which burned much slower, were fully disposed of.

"A lot of people don’t know about this type of ceremony, but it’s important to know, especially for children to learn at a young age," said Vernon Eubanks, the fire safety chair of the Sons of the American Revolution. "We’re grateful for the assistance from the fire department and the Friends of the Great Falls Freedom Memorial in carrying out this important task."

Worn and damaged American flags can be dropped off at the Great Falls Library and fire station throughout the year, where they will be retired in the annual ceremony.