The Oakton Cougars secured a spot in the Virginia 6A basketball finals. 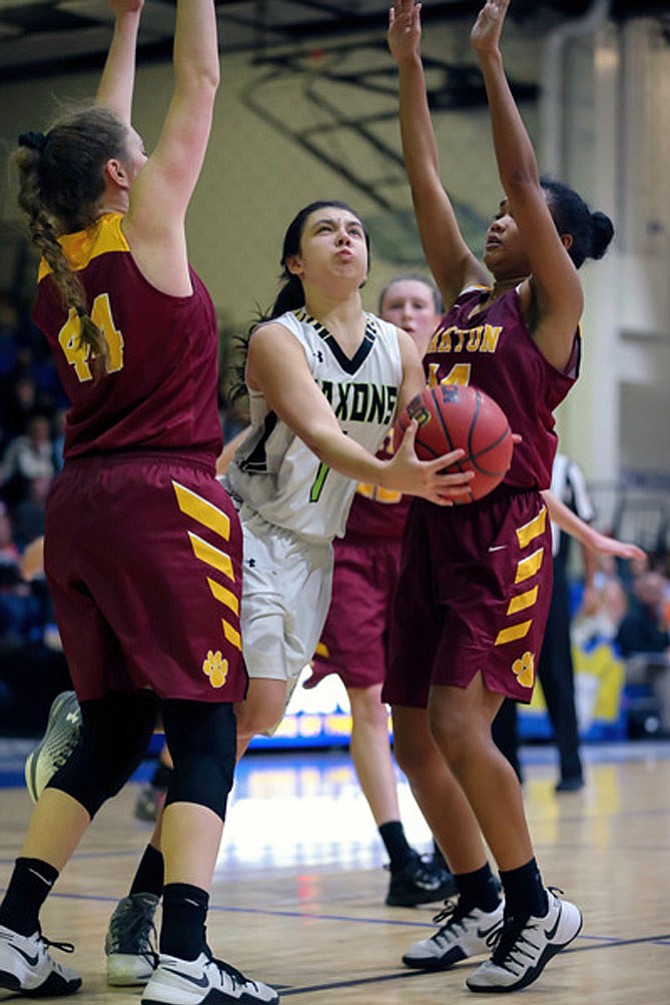 The Oakton Cougars celebrate shortly after earning a spot in the finals of the 6A State basketball championship where they will face Colonial Forge. 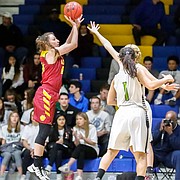 Oakton’s Delaney Connolly #44 connects on two of her game high 31 points as Cougars secured a spot in the Virginia 6A basketball finals.

The Oakton Cougars secured a spot in the Virginia 6A basketball finals after defeating the Langley Saxons 52-40 in the semifinal on March 4.

The Cougars’ track to the finals was not an easy one. After losing to the Saxons 64-36 in the 6A Regional Final, Delaney Connolly was held to 4 points in the game. In the two games following that game Connolly dropped 26 points against Patriot and 22 against Ocean Lakes. Connolly, despite battling the flu has elevated her game at the most important time of the year.

The Cougars arrived at the game after defeating Patriot 73-55, and Ocean Lakes 58-40. Langley, winners of 11 consecutive games arrived after beating Battlefield 45-41, and Woodbridge 55-40.

Langley would start the semifinal game with Oakton with an early 15-11 advantage after playing the first 8 minutes.

Early in the second quarter Langley Oakton’s Maddie Royle was called for her third foul. Royle, upset after the third foul, was also charged with a technical and her fourth foul. Oakton Coach Fred Priester was forced to sit Royle who scored 19 points against Ocean Lakes. Oakton’s stifling defense would hold Langley to just 3 points in the quarter and take a 19-18 lead at half.

In the third quarter, the Oakton defense would continue to wreak havoc on the Langley offense, outscoring the Saxons 17-9 and allowing the Cougars to pull away from Langley.

With a 36-27 lead to start the fourth Oakton would finish off Langley and end their season outscoring the Saxons 16-13 and advancing to the state final game, 52-40.

With the win Oakton (26-4) will face Colonial Forge (24-6) in the 6A Final in Richmond at the Siegel Center on the campus of Virginia Commonwealth on March 11. Langley ends the year with a (25-5) record. Oakton was led by Delaney Connolly’s 31 points and Mina Mori’s 10. Langley was led by Jordyn Callaghan’s 12 points and Ellie Buckley’s 10.