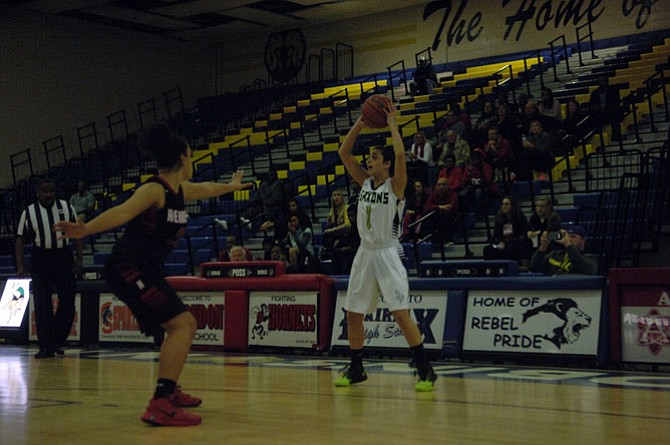 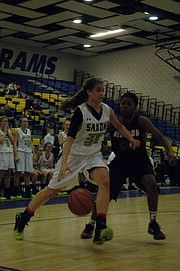 Ariana Aulisi and the Langley girls’ basketball team will face Landstown in the state quarterfinals on Saturday, March 5 at Old Dominion University.

The Langley girls’ basketball team has reached a level of success where the Saxons viewed a three-point loss to undefeated Oakton in theregion semifinals as a disappointment.

Despite the tough loss, Langley enters the state tournament as a confident group after pushing the Cougars to the limit and beating Herndon in the third-place game.

Langley, the No. 3 seed from 6A North, will travel to face Landstown, the 6A South runner-up, in the state quarterfinals at 5 p.m. on Saturday, March 5 at Old Dominion University in Norfolk.

The Saxons enter states with a 24-5 record, having won seven of their last eight contests, including a 42-38 victory over Fairfax in the Conference 6 championship game on Feb. 20. Langley will face a Landstown team with a 23-3 record, according to maxpreps.com. The Eagles won the Conference 1 championship and lost to Woodside 39-28 in the 6A South region final.

“I think we’re excited,” Langley senior and Co-Conference 6 Player of the Year Paige Galiani said. “We have really good position going into [states] and I think we definitely have a chance of going far ­­­ winning it all, hopefully.”

Fifth-year Langley head coach Amanda Baker has turned the Saxons into one of the top teams in the region. After three straight losing seasons, Baker led Langley to a 21-5 record during the 2014-15 campaign, during which the Saxons reached the conference championship game and the region quarterfinals.

This year, Baker said the Saxons hoped to give themselves a chance to contend for multiple championships. After beating Fairfax to win the program’s first conference/district title since 1988, Langley’s hopes for a region championship ended with a 44-41 loss to undefeated Oakton on Feb. 27 at Lake Braddock Secondary School. The Cougars went on to beat Fairfax in the region final. 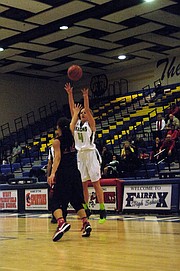 “It’s disappointing to lose,” Baker said. “We really thought the expectation was to win. We didn’t go in hoping to keep it close, but it was an admirable effort. I was really proud of the way the kids executed the game plan. We were right where we wanted to be at the end we just got the wrong outcome.”

Oakton’s 44 points tied a season low. The three-point margin of victory also tied a season-low for the Cougars.

“[It was] definitely a heart-breaking loss [against Oakton],” Galiani said, “but we definitely came out hard as a team and we were excited to come into [the third-place game] because [we] proved we’re a great team last night.”

Shamloo was selected to the 6A North region all-tournament team.

The winner of Langley and Landstown will take on the winner of Oakton and Woodbridge in the state semifinals at 1:30 p.m. on Tuesday, March 8 at VCU in Richmond. The state championship game is scheduled for 7:15 p.m. on March 9 at VCU.

“Winning has definitely helped their confidence and getting wins throughout the season against quality opponents has just really added to that level of confidence,” Baker said, “and going against the top opponent at this point in the season (Oakton), they feel like they’ve been tested and now we’re ready for the major exam here.”