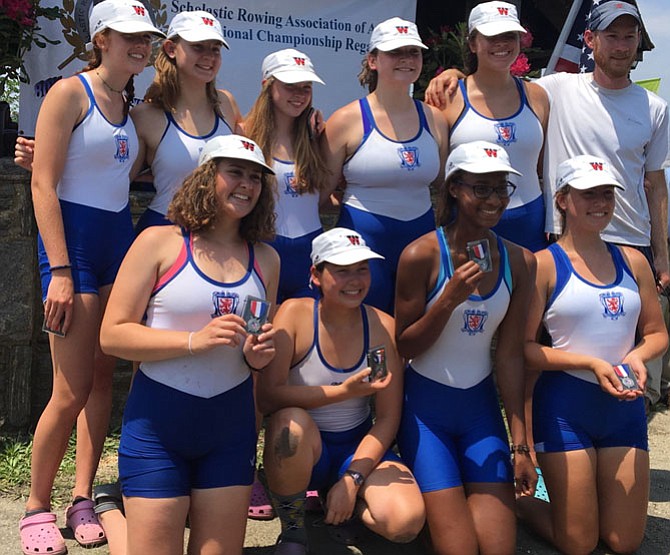 In their second visit to the Cooper River in Camden, N.J. in as many weeks, seven boats from the T.C. Williams Crew Team competed against the top high school boats in the nation on May 25-26 in the National Championship Regatta sponsored by the Scholastic Rowing Association of America. (The SRAA “Nationals” is unofficial because high school athletics do not allow sporting events to be held that decide national champions.)

The top one or two boats in each category from seven state and regional qualifying championship regattas receive an invitation to Nationals. The seven TC boats in this elite group got their tickets to Nationals at the two-day Virginia Scholastic Rowing Association State Championships.

As temperatures pushed towards the upper 80s, the TC Women’s Frosh 8 lined up at high noon for their final with three boats they had faced earlier in the season and the fifth fastest time in morning semi-finals. The six boats all remained in a tight pack in the first 500 meters, but the middle third of the race saw New Trier push to a lead that it never relinquished. At the 1000-meter mark, TC, Whitman, and Mount St. Joseph’s moved slightly ahead of McLean and Upper Arlington as the final sprints began.

With a screaming crowd and a flurry of oars, the Frosh 8s reached for the finish with a pitched battle for second that ended in a photo finish and exhausted rowers on the water wondering about the results. When the announcers finally called the race, it was New Trier in first at 5:12.198, the jubilant TC Women’s Frosh 8 at 5:18.105, and the Whitman squad only inches behind at 5:18.125. Mount St. Joseph’s finished out of the medal count with an achingly close 5:18.761.

Over three hours later, the TC Women’s First 8 rowed to the start of their Nationals run with a burning sun overhead, air practically dripping with humidity, and only occasional puffs of a breeze to provide momentary relief. Unlike their TC Frosh teammates, none of their fellow Stotesbury finalists earned a berth in the final at Nationals. And like the Frosh, the TC First 8’s had the fifth fastest time in their semi-finals.

With a drone hovering over the race and providing live video, Saratoga and Winter Park battled for the top spot almost from the beginning as the TC 1-V-8s started behind the pack but battled their way to third at the halfway point, with Loyola and Moorestown closing fast. Over the next few hundred meters, TC, Loyola, and Moorestown traded positions, each finding themselves in third place at one point before TC began its sprint at the 300-meter mark. The Titan Women stroked to a Bronze Medal finish in 4:55.661, 3.5 seconds behind Winter Park and 2.5 seconds ahead of Loyola. Saratoga took the Gold.

Next weekend the Titans travel to Saint Catharines in Ontario for their last regatta of the 2018 spring season, the Canadian Secondary School Rowing Association Championships on June 1-3.