Salute to Veterans at Mount Vernon 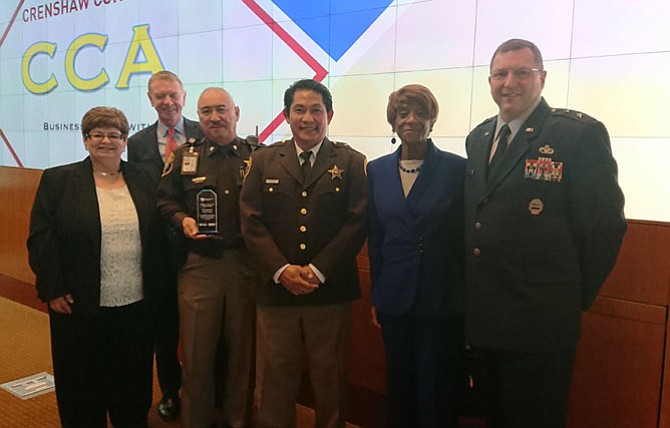 “Nothing is more precious to this nation than our veterans, who have secured our liberties.” — Maj. General Mark Johnson

The value of veterans in the workforce was the focus of remarks by Air Force Major General Mark K. Johnson as the Chamber of Commerce presented its Salute to Veterans Awards Nov. 8 at the Fred W. Smith National Library for the Study of George Washington on the grounds of Mount Vernon Estate.

“Nothing is more precious to this nation than our veterans, who have secured our liberties,” said Johnson, whose father was a West Point graduate killed in Vietnam. “We owe them a debt of gratitude and to show them their service is not forgotten or ignored.”

Johnson, director of DLA Logistics Operations, stressed the skills that veterans bring to a business as they transition from the military into the civilian workforce.

“Why should you hire a veteran?” Johnson asked. “Because they deliver results. Veterans bring a variety of skills and perspective to your team and they have the discipline, drive and motivation to accomplish the task in front of them.”

“I come from a family of 15, with eight retired military,” said Deputy Ernesto Arroyo, who accepted the award with Sergeant Waraphan Srikongyos. “I want to thank Sheriff Lawhorne for giving veterans a chance to show what they have learned in the military.”

“My father’s generation did not always receive the thanks that was due to them,” Johnson said. “We cannot forget those warriors as we stand on the shoulders of those who served to protect this great nation.”