Chamber Honors People of the Year 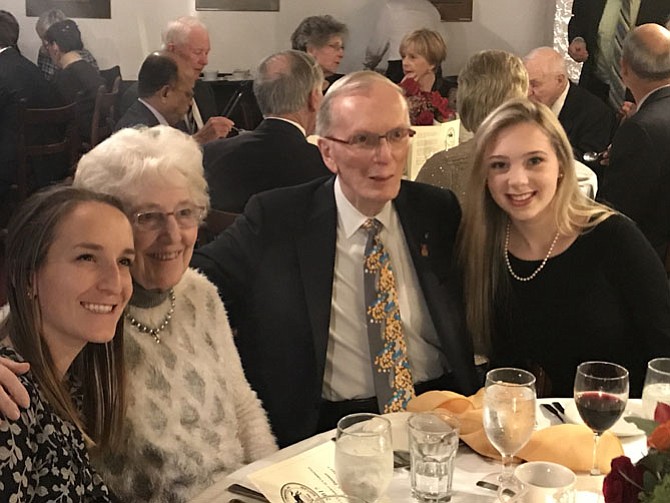 Potomac Chamber 2017 Citizen of the Year Dr. John Sever with his wife and granddaughters. Sever, as both a Rotarian and head of infectious disease at NIH, has been instrumental in a worldwide effort to eradicate polio since 1978. Photo by Mary Kimm.

Potomac Chamber 2017 Youth of the Year Harrison Smith, 17, a student at Landon was honored for his intense interest in science and his community service work. Award given by Steve Ornstein

Thursday, Nov. 16, to honor Potomac’s “people of the year,” named by the Potomac Chamber of Commerce.

Dr. John Sever, Potomac Citizen of the Year for 2017, served as chief of infectious diseases at the National Institutes of Health, and as a Rotarian was instrumental in combining forces between Rotary volunteers and major health organizations in efforts to eradicate polio. That effort began in 1978. Polio cases have decreased by more than 99 percent since 1988, from an estimated 350 000 cases, to 37 reported cases in 2016, according to the World Health Organization. Only three countries remain where the disease is endemic — Afghanistan, Pakistan and Nigeria.

Harrison Smith, 17 and a student at Landon, was named 2017 Youth of the

Potomac Chamber 2017 Business Person of the Year Jim McWhorter of the Market at River Falls receives his award from Adam Greenberg.

Year. Harrison has been a force in the study of science at Landon, and has also worked on many community service projects. An excellent student, he also helped repair a homeless shelter in Ohio, and packaged relief supplies for victims Hurricane Sandy, among other activities. He hopes to study engineering at college next fall.

Jim McWhorter, named Potomac Business Person of the Year, purchased the Market at River Falls in 2014 and has made the Market an important part of the community. McWhorter and his wife Yasmin Abadian are both longtime Potomac residents and patrons of the market before they purchased it. They hold regular “community days” during which they contribute 25 percent of proceeds to local charities, donating more than $60,000 so far. Click here for a video of Jim accepting the award.