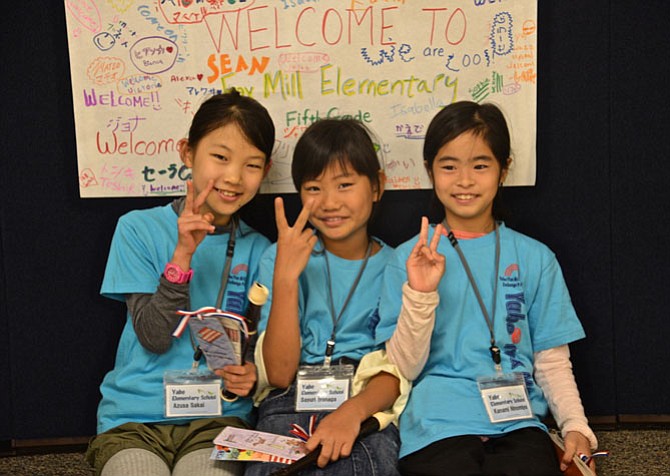 Azusa Sakai, Sayuri Iyonaga and Kanami Ninomiya share their hopes for peace after the special assembly at Fox Mill Elementary, where the young trio and seven of their school chums have been visiting as exchange students, hosted by families of Fox Mill students. Photo by Andrea Worker. 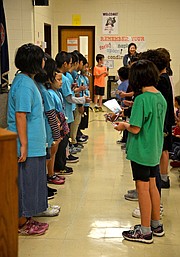 The visiting students from Yabe Elementary and some of their Fox Mill Elementary counterparts line up to exchange gifts of appreciation between hosts and guests. 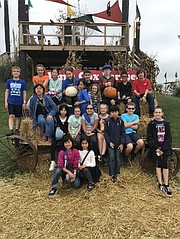 One last play day, before the Yabe Elementary kids head home. It’s an adventure at Cox Farms in Centreville for the visitors from Japan and the families who hosted them.

In a time when too many people seem determined to focus on what divides them, the students, staff and parents of Fox Mill Elementary School in Herndon quietly go about their business, seeking ways to bring people together. The school has long been known for its Japanese immersion program, with many of the youngsters learning the language to the point where they can take regular curriculum classes in a mix of both English and Japanese. They have participated in Japanese cultural enrichment events and welcomed Japanese performers and artistic and cultural representatives through their doors. This month, they took their interest in all things Japanese, as well as their spirit of cultural curiosity and welcome, to a new level.

From Oct. 7-15, 10 students from Yabe Elementary, just outside of Tokyo, were hosted by Fox Mill families, attended classes at Fox Mill, and joined in to enjoy a variety of activities with both their hosts, and together with other host families and exchange students. Three chaperones accompanied the young ambassadors, who ranged in age from 9-years-old to 11.

After the youngsters arrived and settled in – and recovered from jetlag – their visit started off with a welcome picnic at the school, with Fox Mill principal Brian Moose doing the grill master honors, giving the newcomers a chance to check out their new, temporary academic environment before really getting down to business.

On Oct. 10, a friendship ceremony was held, which included the planting of cherry trees that were donated to Fox Mill by ANA Airlines.

This is Fox Mill’s first time to conduct an exchange program. The hosting opportunity was open to all Fox Mill families, even those without children enrolled in the immersion program.

The Chronisters are one such family, with no child enrolled in the immersion classes, but still they offered, and Patti Chronister said that the experience has been a delight.

“I knew this would be a good experience for the kids,” she said, “but I am surprised as to how much I myself am getting out of it. I am learning basic Japanese – embarrassing my daughter – but the smiles I get from Sayuri as we communicate makes my day, every day.”

Sandy Picarelli was equally pleased with the program, and her family’s hosting experience. “I am amazed at how much Timaues has blossomed. He is talking to Shinsuke in Japanese with great confidence and has shown great responsibility for making sure his guest is enjoying himself…even when there are limits in verbal communication, the boys have found common interests that are connecting them.”

Program coordinator and number-one-program-cheerleader Alison Malzahn of course offered an American home experience to one of the students.

“What surprised me the most is how instantly Nao became a member of our family. There have been some difficulties with acclimation – jetlag, carsickness and some homesickness have all been part of our experience…but the moment Nao stepped off the bus, we became a family not of four, but of five.”

On Thursday, Oct. 12, the 10 now-not-so-foreign students joined a Fox Mill assembly where the Yabe pupils introduced themselves, after which the children exchanged gifts to remember each other. With the formalities attended to, the Yabe students thanked their hosts first with a song in Japanese, and then with a rendition of “Country Roads” by John Denver, first playing the tune on recorders, and then singing the song in practiced harmony.

After the applause for their performance died down, the whole cafeteria filled with the sound of children singing the Disney ditty “It’s a Small World After All.” There were noticeable tears in the eyes of adults in attendance as they witnessed the bonds being built between youngsters of two countries and cultures – just as they had hoped would be the result of the program.

Before heading home on the 15th, the Yabe students and their host families enjoyed one more group gathering – a fun day at Cox farm.

In June, principal Moose and teachers Yoko Linam and Keiko Endo will become the chaperones, as they accompany seven Fox Mill youngsters to Japan for their turns as the foreign exchange students. “This is such a great opportunity,” said Alison Malzahn, who also plans to make the trip. “We are all so excited. To start building these relationships so early, when they can last a lifetime, it’s a great thing. I hope we can keep this going for years to come.”