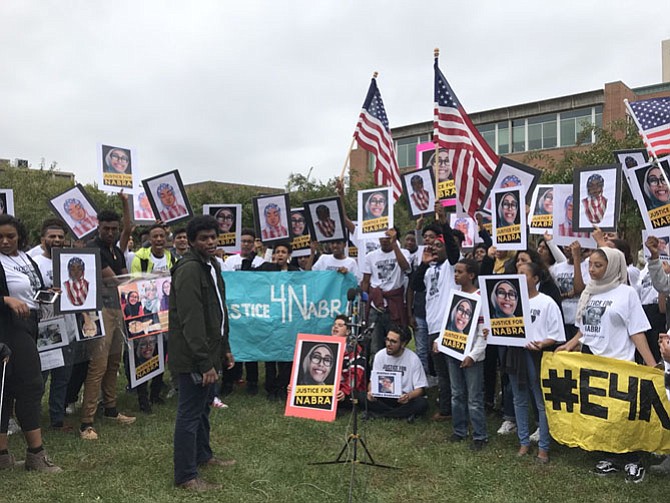 Omer Gorashi, whose “sisters were good friends with Nabra Hassanen,” led a group of young demonstrators in chants outside of the courthouse after the hearing was closed to the public: “Everything for Nabra” and “Justice for Nabra.” He also led them in a repetitive Q-and-A chant: “What do we want?” he asked. “Justice,” they responded. “For who?” “Nabra.” “When do we want it?” “Now.” Photo by Fallon Forbush. 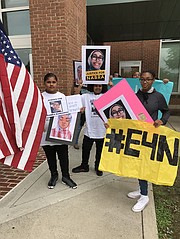 The younger sisters of the murder victim, Nabra Hassanen, and their friends showed up to the court with “Justice For Nabra” and “#E4N” (Everything for Nabra) posters. They were not allowed to bring them inside. 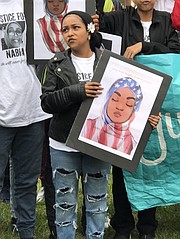 Zahwa Ezzelden, 19, a cousin of the murder victim, led a group of young demonstrators to “take a knee for Nabra.” “This crooked system kicked us out,” she said. 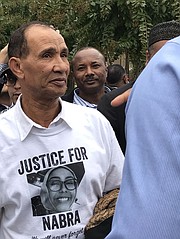 Mohmoud Hassanen, the murder victim’s father, and community members wore white T-shirts with Nabra’s photo, which circulated around the world in media reports after she was reported missing. The shirt said, “Justice for Nabra” and “We will never forget.” 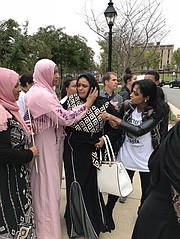 Sawsan Gazzar (center), the murder victim’s mother, is consoled by community members outside of the courthouse after an emotional day in court. 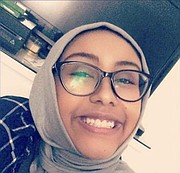 “You killed my daughter!” the father of a Reston teen who was murdered this summer cried out in a packed courtroom, right before the victim’s mother flung a shoe at the defendant.

This was an overwhelming experience for the family and those who knew Nabra Hassanen, whose life was violently taken from her at age 17.

The commotion rippled through the crowd just as the Commonwealth’s Attorney’s criminal case against the charged suspect, Darwin Martinez Torres, was about to begin at the Fairfax County Juvenile and Domestic Relations District Court in Fairfax on Friday, Oct. 13.

It was the first time Torres, entering the courtroom in a green jumpsuit, was in the same room as Nabra’s parents — father Mohmoud Hassanen and mother Sawsan Gazzar.

THE HIGH-PROFILE HEARING was originally scheduled for a smaller room, but was moved to a larger space that could hold up to 250 people. Fairfax County Police Department Spokesperson Julie Parker, whose police officers and detectives — along with Loudoun County — were involved in the search for the victim when she went missing and the investigation, sat in the first row that was reserved for witnesses and those involved in trying the case.

Family and community members filled the rest of the room to capacity, most wearing white T-shirts adorned with the victim’s smiling face with the words, “Justice for Nabra” and “We will never forget.” This left some people outside unable to enter. Standing room was not allowed by the 10 or so officers from the Sheriff’s Office who were patrolling the room.

After Torres entered through a door at the front of the room, his defense team huddled around him. Sniffles and soft crying could be heard; women pulled tissues from their purses to wipe away tears; and the victim’s father sat cradling his mouth and nose with his left hand in what appeared to be a gesture of disbelief.

The 22-year-old defendant, a citizen of El Salvador, was living in Sterling without legal permission and held without bond at the Fairfax County Adult Detention Center.

Presiding Judge Kimberly Daniel then entered the room. The audience was asked to rise from their seats and were quickly asked to be seated once again. That’s when the emotions became too much for the parents, who were seeing the accused face-to-face for the first time.

“You killed my daughter!” Hassanen yelled as family members around him tried to pull him back from lunging toward the defendant.

Torres and the judge were quickly whisked away to safety, but not before Gazzar hurled a shoe from across the room, coming close to striking him. “I kill you, [expletive],” she yelled.

The father was hauled away by officers, while the mother was left in her seat, after being pulled back down by those around her.

“What the [expletive] are you going to do about it?” a young man who had tears running down both cheeks angrily asked an officer who was trying to restore order. Those around him begged him to be quiet. “[Expletive] you. Rot in hell,” he said to officers as they escorted him out of the courtroom.

Due to the outbursts, the judge decided to close the hearing to the public and officers instructed audience members who were not family to leave the courtroom. Members of the media were escorted to another room, where they were permitted to watch the hearing via live stream. The hearing was also moved to another, smaller courtroom.

“I am not going to stuff the courtroom like we did the other one,” Daniel said, instructing the officers to allow the parents of the victim to enter, but only permitting them to sit in the back row of the opposite side of the courtroom from the defendant.

COMMUNITY MEMBERS began organizing outside of the courthouse as the hearing resumed — an hour later with only attorneys, the defendant and Nabra’s family members present.

It ended almost as soon as it began, with Torres waiving his right to a preliminary hearing, which would determine probable cause, or reasonable grounds for presuming guilt in someone charged with a crime, which is needed to move forward with a criminal trial.

The prosecution was not expecting this move from the defense.

“I thought we were going to have a hearing,” Raymond Morrogh, the Fairfax County Commonwealth’s Attorney, said. “We had our witnesses lined up and we had been preparing this week.”

With the waiver, the case was sent to a county grand jury, which would decide whether to indict Torres on a charge of first-degree murder, which is the willful, deliberate and premeditated killing of any person or, in this case, the killing of a person in the act of rape, object sexual penetration or abduction.

Morrogh spoke on behalf of the victim’s parents after the hearing.

“I think we can all understand the emotions here,” he said. “It’s very hard on the family, especially when they see the accused for the first time.”

He sympathized with them and described his personal reaction to their outbursts.

“I was just sad,” he said. “I feel for those people … they’re suffering … I know they meant no disrespect to the judge or the process, but it’s a difficult process and we’re going to try and work with our victim witness assistants to hope that it doesn’t happen again, and take every step we can to make sure everybody is as comfortable as they can be under these tragic circumstances.”

It did not take long for a decision.

Torres “did feloniously, willfully, deliberately and with premeditation kill and murder Nabra Hassenen,” the indictment said.

The next hearing for the case will be at the Fairfax County General District Court in Fairfax this Thursday at 9 a.m. A trial date will be decided at this hearing, according to Morrogh.

“I intend to pursue the death penalty in this case,” Morrogh said.