Republicans get a head start in the general election; Democrats still fighting each other 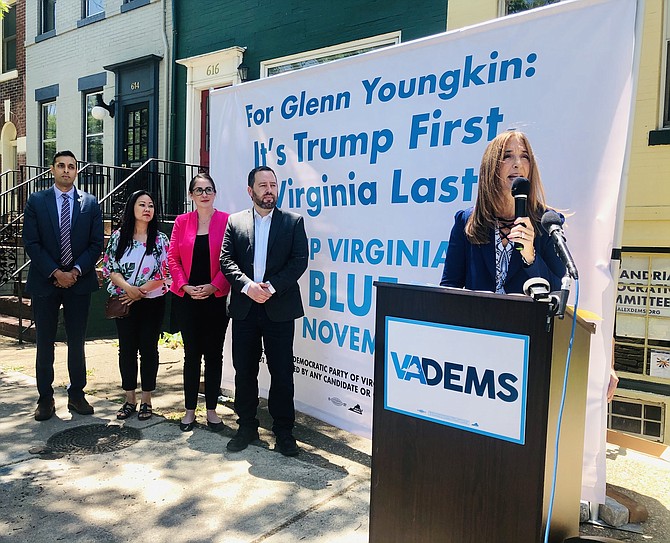 The Republican stateside ticket, from left to right: Jason Miyares for attorney general, Glenn Youngkin for governor and Winsome Sears for lieutenant governor.

The way Democrats talk about Donald Trump, you'd think he was on the ballot in 2021. And in many ways, he is.

The former president may be out of the White House and kicked off of social media, but he's still eager to see himself as a kingmaker. Shortly after wealthy businessman Glenn Youngkin secured the Republican nomination in a multi-location convention, Trump endorsed Youngkin and reinserted himself in the conversation. Democrats did not miss a beat, launching a tour of the commonwealth they call the “Where Trump Leads, Glenn Follows” Tour.

"He is just like Donald Trump," said House Speaker Eileen Filler-Corn this week when the tour arrived in Old Town Alexandria. "He will stand for the same policies and same initiatives that Donald Trump has stood for."

The contours of a fall campaign season are starting to come into focus as Republicans and Democrats stake out positions on everything from criminal-justice reform and abortion rights to voting access and preventing gun violence. Republicans get a one-month head start, giving them the ability to move from a divisive convention into a general election strategy for the fall campaign season. Democrats, meanwhile, are still attacking each other as the June 8 primary approaches.

"We're running in every corner of the commonwealth, in more seats than we've contested in a half century," said House Republican Leader Todd Gilbert. "I'm more confident than ever that voters will return a Republican majority to the House of Delegates in November."

AT THE TOP OF THE TICKET, voters will be choosing between Youngkin and the nominee Democrats pick as their nominee for governor on June 8. Public polling and campaign finance records show former Gov. Terry McAuliffe has a decisive lead heading into the election in an extremely strong position. Other candidates in the race for governor are Lt. Gov. Justin Fairfax, Sen. Jennifer McClellan (D-9), former Del. Jennifer Carroll Foy (D-2) and Del. Lee Carter (D-50). A Wason Center poll last month showed McAuliffe with 47 percent support while all the other candidates were in single digits. Even if all 27 percent of the undecideds broke for one candidate, McAuliffe would still be in the lead with $8.5 million cash on hand.

a podcast examining the ongoing transition of power in Virginia

“This gubernatorial field is the most diverse in the history of the commonwealth, and that has drawn a great deal of interest in the race,” said Rebecca Bromley-Trujillo, research director for the Judy Ford Wason Center at Christopher Newport University. "So we're seeing that in the field but we're not seeing that in the leaders in these races, at least for governor and attorney general."

Despite the lopsided nature of the polling and the fundraising, the primary has not lacked for drama. During a televised debate, Fairfax said when he was accused of sexual assault, McAuliffe treated him like Emmet Till or George Floyd. Carroll Foy has been all over the airwaves, thanks in part to $600,000 from Clean Virginia Fund. And Carter has moved the field of candidates to the left by talking about issues like using tax revenue from marijuana sales to create a fund for reparations to account for the slave trade. McClellan has repeatedly pointed out that she has more state government experience than anyone else in the race.

"Unlike past recessions, we cannot simply focus on luring other companies here to Virginia," said McClellan. "We have got to stabilize and grow the small businesses, particularly our women and minority owned businesses, who are struggling, and who want to provide the leave to their employees, sick leave, paid family medical leave, and they need our help to do it."

THE JOB OF LIEUTENANT GOVERNOR is often overlooked, although it plays a key role in breaking ties in the Senate. That responsibility is more important now than it's been in recent memory because Democrats have such a thin majority and the body has a handful of conservative Democrats. Republicans have chosen firebrand conservative former Del. Winsome Sears (R-90), who appears in campaign photos with an assault rifle to show her support for gun rights. She pulled ahead of the pack of other candidates after Sen. Amanda Chase (R-11) and former lieutenant governor candidate E.W. Jackson endorsed her. As an immigrant from Jamaica, she's made opposition to critical race theory a cornerstone of her campaign.

"The Democrats, they're not helping us," said Sears at a candidates forum. "They're pitting the races against each other. You've heard the constant Black, white. Now it's Asian, they're speaking against Thomas Jefferson kids and their successes. They want quotas."

The Democratic primary for lieutenant governor is the most wide open. Polling has Del. Sam Rasoul (D-11) slightly ahead, and he's raised more money than any of the other candidates. But Del. Hala Ayala (D-51) has the endorsement of Gov. Ralph Northam, who is attempting to play the role of kingmaker on his way out the door of the Executive Mansion. The crowded field of candidates also includes Norfolk City Councilwoman Andria McClellan, Fairfax NAACP president Sean Perryman, NFL player agent Xavier Warren and Del. Mark Levine (D-45). Levine is in the awkward position of trying to defend his House seat from a primary challenger while also competing statewide.

"When a candidate runs for two offices at the same time, they're sending two messages," said Stephen Farnsworth, political science professor at the University of Mary Washington. "One, I want something better than what I have, and two, I'm not sure I'm going to be able to get it."

VOTERS WILL ALSO BE CHOOSING between Del. Jason Miyares (R-82) and the winner of the Democratic primary, which features incumbent Attorney General Mark Herring and challenger Del. Jay Jones (D-89). Herring was first elected in 2013, and he's seeking a third term in office. During his time in office, he's created a new Office of Civil Rights as well as a new conviction integrity unit and a new worker protection unit while also reorganizing the consumer protection section. Jones has criticized Herring for waiting until election season before making some of those changes, and he attacked Herring for wearing blackface at a college party in the 1980s.

“I sat in the room two years ago with the Black Caucus when you disclosed that you wore blackface just days after you called on Governor Northam to resign," Jones said during a televised debate. "I was there when you took that paper out of your jacket, smoothed it out on the table and read us a statement with no empathy, no compassion.”

Herring hasn't been shy about criticizing Jones either. During a televised debate earlier this month, Herring brought up a bill Jones introduced that could have created a loophole for predatory lenders. The bill would have allowed for loans of 36 percent plus a daily fee that could amount to 320 percent a year. Jones never withdrew the bill, although it was left in committee. Jones ended up voting in favor of a different bill, one that Herring made a rare personal appearance to support in committee.

"When I was working to crack down on dangerous predatory lenders, Delegate Jones was actually supporting the predatory lenders and authored a bill that would have allowed them to charge 350 percent interest," said Herring. "These are hard-working, struggling Virginians just trying to get by."