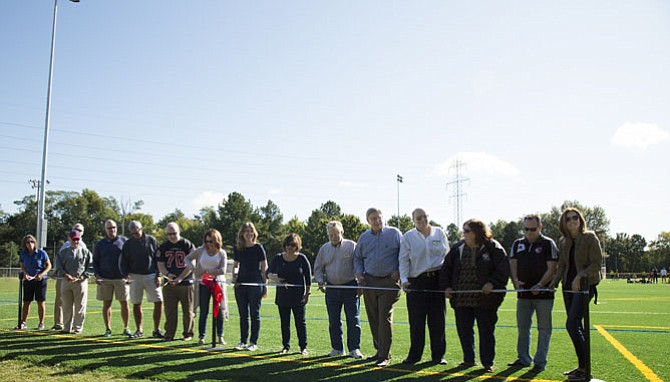 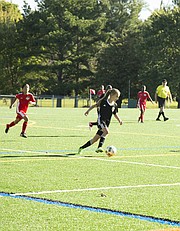 Sofia Pakhomkina, 11, of the town of Herndon drives the ball to score the final goal, resulting in a 4-4 draw between her team, the Herndon Lightning, and Takoma United on Saturday morning.

Soccer players began practicing on the field in August, and the field was bustling with multiple teams playing games on sections of the field while officials assembled to cut the ribbon.

“This project has been a really long-time coming … Herndon Town Councils long before we arrived had the foresight to put this on the plan and it’s been on the books since … 2004 — a long time ago — and was finally funded this past year,” Town of Herndon Mayor Lisa Merkel said during the ribbon cutting as soccer players battled behind her and parents cheered and yelled for their teams around her.

The field replacement from natural grass to turf was listed on the town’s Capital Improvement Program (CIP) for more than 10 years and was bumped year-after-year until money was secured to finance the project, which cost just over $1 million.

“We really cannot thank Herndon Soccer enough because we would not have been able to do this without your generous contribution,” Merkel said.

Herndon Youth Soccer, which has soccer teams for boys and girls under-5 to 19 years old, will be the primary user of the field. The club also uses the fields at Herndon High School, which it also 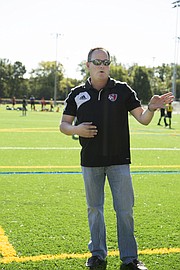 Herndon Youth Soccer President Dave Bekenstein addressed the crowd during the ribbon cutting for the new field, but was unaware that the infill system used crumb rubber.

funded, according to the club’s president, Dave Bekenstein.

“The field used to be unusable and the teams have been excited to have it,” Bekenstein said of the new turf field. “It can be used, even in bad weather.”

The field has been booked ever since it opened, according to Cindy Roeder, director of the town of Herndon Parks and Recreation Department.

“The teams were super excited,” Roeder said. “Our teams have been waiting to play here at home.”