Ready, Set, Bags in the Air in Arlington
Votes

Ready, Set, Bags in the Air in Arlington 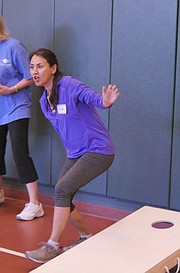 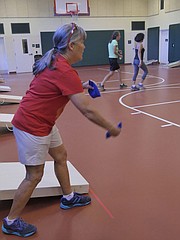 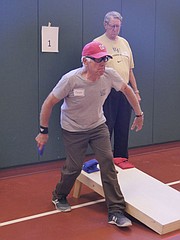 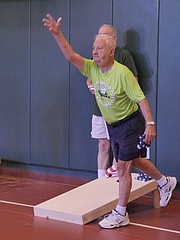 Red striped and blue polka dot bags whiz through the air at Fairlington Community Center on Friday, Sept. 15. Contestants from across a wide spectrum of Northern Virginia are lined up in lanes for the singles corn hole competition for the Northern Virginia Senior Olympics (NVSO).

The sign-in desk is scattered with a pile of papers including a list of contestants, a bracket and NVSO information. The volunteer coordinator announces, "We've had a lot more singles sign up then we expected … and that's awesome." She shuffles through the stack of papers and says since all the women are present she will start them out in lanes one and two.

Cindy Hook from Annandale and Lizzet MacDonald from Falls Church are competing in lane one. It will be the best of 15 with the winner needing to win by two points. At the end of the first round MacDonald reports she has won by a score of 19-11. After a closely fought match, Hook comments, "she sure filled it up on the last one."

A blue bag lofts high into the air and falls into the hole to cheers from a noisy crowd. Lloyd Pierce is here from Ashby Ponds in Loudoun County along with Don Tanner from Ashburn. Pierce reports after his first round a win of 15-3 and Tanner is 15-2.

Charlie Dierkes of Arlington is here this year playing singles. He says, "Last year I played doubles with my son. This year I almost didn't make it because my dog is really sick with an inner ear infection that makes her sway." He demonstrates with a sideways wobble.

Charles Toftoy is also here from Arlington. He has been entering Senior Olympics for 20 years and this year will bring his total number of different events to 30.

The NVSO will continue until Sept. 20 with a full week to come including eightball pool, pickleball, badminton, basketball, bunko and sudoku.