Speakers examine past, present and future of gun control reform. 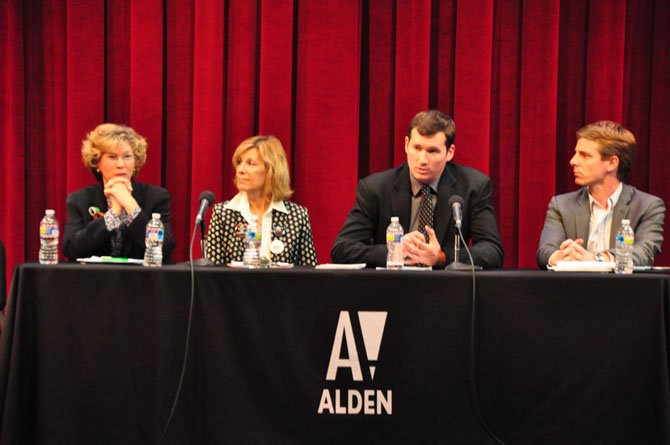 From left, Karen Marangi of Mayors Against Illegal Guns, Martina Leinz, president of the Northern Virginia Chapter of the Million Mom March, Colin Goddard, assistant director of the Brady Center and survivor of the Virginia Tech shooting, and Peter Ambler, former legislative aide to former Congresswoman Gabrielle Giffords and strategic director of Americans for Responsible Solutions, speak at the Alden Theatre Monday, May 8. Photo by Alex McVeigh.

Ruth Hoffman of McLean watched the details of the Sandy Hook Elementary School shooting last December and couldn't help but feel it hit close to home. As the mother of a 4-year-old and 7-year-old, she identified with the families of the victims of the tragedy, and found herself rethinking her previously held belief on guns.

Martina Leinz of Arlington, president of the Northern Virginia Chapter of the Million Mom March, speaks at a gun control reform forum Monday, May 13 at the Alden Theatre.

“After Newtown, I listened a little closer, I followed the debate, and I became ashamed of my [Republican] party and their talking points against making even the most modest changes in addressing this issue,” she said. “I feel regret that I didn’t care more, before something like that.”

Soon Hoffman had another scare, this one much closer to home.

“On January 2, my daughter’s school went into lockdown. A man had stolen a car, wrecked it near the school and fled on foot. And my first grader, along with her class, took cover in the corner of her classroom,” she said. “And she told us that night, ‘Mommy, I cried and prayed because kids said a man was coming with a gun to shoot us.’ And now their school keeps their classroom doors locked during the day, and children take turns opening their first grade classroom to kids entering through the door.”

Hoffman was one of dozens of local residents that came to the Alden Theatre Monday, May 13 to discuss the gun issue. Concerned Citizens Against Violence hosted a forum with activists in the gun law reform community. 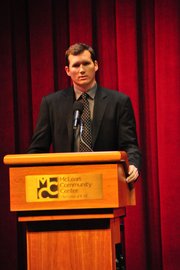 Colin Goddard, who survived the 2007 shooting at Virginia Tech, speaks at a gun control reform forum at the Alden Theatre Monday, May 13.

MANY SPEAKERS shared what they called their “Newtown moment,” a moment when they said they could no longer sit on the sidelines of the debate.

“My personal Newtown moment took place after the Binghamton Immigration Center shootings in April 2009. That was the first shooting I witnessed after the shooting I was involved in, and it seemed to me that the events played out in the same way,” said Colin Goddard, who works with the Brady Campaign to Prevent Gun Violence. “I knew what those families were going to go through, getting a phone call, massing at a hospital somewhere not knowing what news they would get. It brought me back to the day my parents got that call, and went to a hospital. And I wondered why we hadn’t done something about this?”

Goddard survived the Virginia Tech shooting in April 2007, where a gunman killed 32 people. He was one of only seven members of his Intermediate French class to survive, and he was shot four times. Three bullets still remain in him.

He described himself as disappointed following the Senate’s rejection of expanded background checks in April, but pledged to work even harder.

“The person who shot me had a background check, but because Virginia never sent his records to the right place, he was allowed to walk out the door with a gun,” he said. “What happened in the Senate was pretty tough to swallow, especially considering it was close to the sixth anniversary of the Virginia Tech shooting. Despite the negative headlines that came out, a majority of the Senate did vote on expanding background checks, it just wasn’t a big enough majority. Now we know that 55 votes is our baseline. We can only go up from there.”

Peter Ambler, who was a legislative aide to former Rep. Gabrielle Giffords, who was shot in the head in January 2011, is now strategic director of Americans for Responsible Solutions. He said it’s up to the electorate to speak at the ballot against politicians who stand in the way of reform.

“Senators look at polls, and it’s not like they don’t believe them, but they don’t think, at the end of the day, that you’re going to the ballot box … and condition your vote on an irrational position on gun laws,” he said. “It’s the people in the audience tonight who are going to make the difference.”

KAREN MARANGI of Mayors Against Illegal Guns said that American gun laws operate backward, only changing after a tragedy has happened.

“The way the gun laws have developed in our country has been to make a major change after a horrible shooting,” she said. “We thought the Gabby Giffords shooting might be the moment where we’d see a huge sea change. There was a change, a lot of people learned from that, but Newtown was exponentially a different experience for all of us.”

She said that her goal wasn’t to take guns away from everybody, just to put in more safeguards so people who could use them against others might not be able to access the firearms.

Martina Leinz of Arlington, president of the Northern Virginia Chapter of the Million Mom March, said Virginia has been a tough state to get even modest laws passed.

“What happens in Virginia is, not only do we not get good sensible laws passed like background checks at gun shows, but we have to fight defensively against some ridiculous bills that are put forth,” she said. “As frightening as it is to me that we have such horribly relaxed gun laws, it is more frightening to me that we have allowed Congress to become so irresponsible that they disregard 92 percent of Americans,” she said. “We cannot tolerate this.”