Sea of Orange in Arlington
Votes

Sea of Orange in Arlington 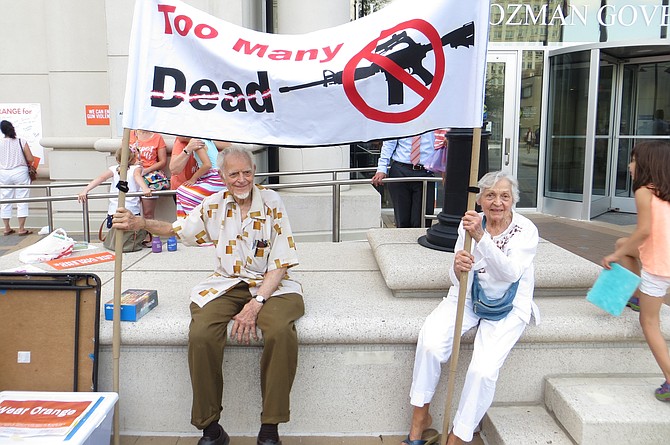 Robert Pallansch (left) and Marielouise Pallansch carrying a sign made by their son, Paul. Photo by Vernon Miles. 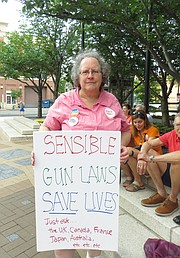 Natalie Goldring with a sign advocating for gun control.

Wear Orange for Gun Safety rally in Arlington on June 1. 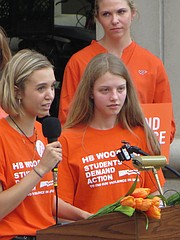 Karina de Leede (left) and Chloe Fugle (right), students at H-B Woodlawn and leaders of Students Demand Action, speak at the Wear Orange for Gun Safety rally outside County Board offices on June 1. 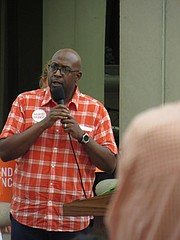 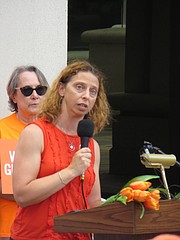 Karina de Leede remembered the Wear Orange event just a few years ago. It was also held outside the Ellen Bozman Government Center, but the crowd was much smaller. There was a sense of frustration, that nothing would change on gun control and a concern that life with gun violence was just going to remain the status quo. But just a few years later and the crowd gathered in that same courtyard is six times the size. The entrance to the County Board offices on June 1 was filled with orange shirts and scarves, with some ralliers carrying signs advocating for more gun control.

The June 1 rally was part of a nationwide “Wear Orange” event. The event was organized by Moms Demand Action, a group that emerged from social media in the wake of the Sandy Hook shooting. Beth Fine, the organizer, said she’d always been concerned about gun control, but that her feelings on it were hardened when her friend was an innocent bystander who was shot and killed outside Ben’s Chili Bowl.

De Leede and her classmate Chloe Fugle attend H-B Woodlawn, where earlier this year they organized a discussion between students and local politicians on gun control. De Leede and Fugle, leaders of Students Demand Action, were invited to speak at the Wear Orange rally.

“It’s a little scary,” Fugle said, “I’ve never spoken in front of this many people. We’ve been talking to people we knew [at H-B Woodlawn] but we have to move outside of that. We can’t get change with just 10 people; we have to start a movement.”

For many at the rally, incidents involving guns had taken a tragic toll on their lives. For de Leede, it was the unsolved murder of her grandfather, shot through his window.

“We still don’t know who did it,” said de Leede. “I’m still scared every time the yard motion lights turn on. It’s devastating.”

“When I was 10, my best friend was shot,” said Nancy Modesitt. “The gun used had been left unsecured.”

Modesitt said her feelings on the likelihood of gun reform were at an all-time low after the Sandy Hook.

“If we can tolerate first graders being murdered, where do you go from there?” said Modesitt. “But now, it feels like the Parkland students have made a difference. They were victims, but they are present and articulate about what they went through.”

“There are too many people dying,” said Marielouise Pallansch, holding a gun control sign made by her son Paul with her husband Robert Pallansch. “It’s unnecessary. Our country leads in this kind of murder. We have to do something about it. I’m so proud of the young people. Today seems upbeat, like everyone is here and wants to be here, and wants to see change.”