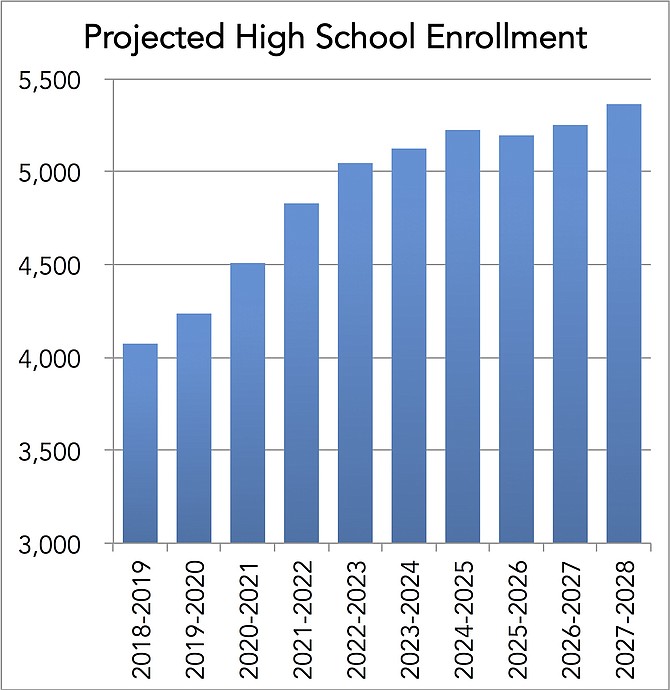 On Monday, the school system commenced a public process to determine how to expand high school capacity, framing what promises to be one of the coming year’s weightiest political questions.

Unlike previous approaches, which defaulted toward new construction, this process seeks first to overhaul the community’s basic vision for high school education, from which decisions about facilities would then follow.

This challenge has been a political stumbling block for the School Board and City Council, which share the power of the purse as it relates to public education. After a contentious FY 2018 budget cycle, council established the Ad Hoc Joint City-Schools Facility Investment Task Force, a “blue ribbon” advisory group, to recommend a way through the impasse.

By the task force’s acknowledging the urgency, ACPS’s capacity challenges “were finally embraced and addressing the exponential high school growth became a priority,” according to an Aug. 13 ACPS press release. In this year’s budget process, mostly following the task force’s recommendations, council fully funded ACPS’s request of $475 million to fund the schools’ FY 2019-2028 Capital Improvement Program (CIP). That’s a 27 percent increase over council’s prior year allotment of $373 million. Fully $124 million through FY 2021 goes to expanding high school capacity — the second most costly capital project between the city and schools during that period, behind fixing city sewers. Project details will depend on ACPS’s planning process, now underway.

But the task force also cautioned the school system to think harder about how to meet capacity need. They regarded as premature the schools’ initial plan to expand T. C. Williams’ grade-9 Minnie Howard campus into a second high school.

“There’s a lot of embedded assumptions,” said task force member Amy Liu last September. “There’s not been a public discussion about the future structure of a high school. …Somehow we’re leading with a facilities decision before we’re actually having a conversation about education and the best thing that’s good for the community.”

The city’s legacy of racial segregation looms especially large. Alexandria established T. C. Williams as its single integrated high school in 1971. Redistricting around a second high school now could cause de facto re-segregation, as black and Hispanic residents live disproportionately in the city’s western half. On the other hand, having one huge school may pose logistical challenges, and also limit students’ opportunities in activities like sports and student government.

Residents continue to face the challenge of “creating one Alexandria and creating well-formed, well-educated adults as they come out of schools,” said task force member Dwight Dunton in November. “The question remains the same. The answer, we do not know whether it should be one school, as T. C. Williams is, or possibly multiple schools or multiple configurations. …We believe that is the fundamental question that needs to be discussed by this community, as to what the proper solution is for Alexandria for the next 50 years.”

ACPS is “very, very conscious” of the diversity and equity challenge, said ACPS spokesperson Helen Lloyd. At the same time, the school division has come to believe that desired academic and workforce-oriented programming should drive site determination.

“If we keep getting hung up on [the question of one versus multiple high schools], we won’t make the date. …We have to move forward with this issue,” said Mignon Anthony, ACPS’s COO and a former task force member. “Let’s figure out the program, then figure out the options for placing it somewhere, see how much those are going to cost, and bring it all together.”

“Rather than simply looking at buildings, space and land acquisitions, we are choosing to see this as an opportunity to assess the skills that our students will need to be successful in the future. We want to focus on which programs to offer in order to fulfill those needs in the long run,” according to ACPS’s website. “This project will include a focus on the future business needs of Alexandria, Northern Virginia and the D.C. metro area — as well as the United States — and create programming aligned with those future needs.”

“It’s going to be a combination of ways that we’re going to deliver high school programs,” said Anthony. For example, some identified programming may require larger or smaller facilities, or may be fulfilled by partnerships with higher education institutions. Delivery methods could incorporate public-private partnerships. A developer might include a new school in a mixed-use project, such as in Landmark, Potomac Yard, or the Eisenhower corridor, she said.

In any case, determining programming before building a new high school represents “a huge shift in thinking that we’re going to have to bring our community around to,” said Lloyd.

Through a series of focus groups and town halls starting this week, ACPS will take input from students, families, staff, business leaders, higher education institutions, and the community at large. The engagement process aims to wrap up with recommendations for the School Board’s initial consideration on Nov. 8. The city government will also participate in the process through bi-monthly meetings of primary city and school staff, as well as through the standing Joint City Council/School Board Subcommittee. Based on what’s forthcoming, ACPS wants to identify site options by March and start the design process by May.