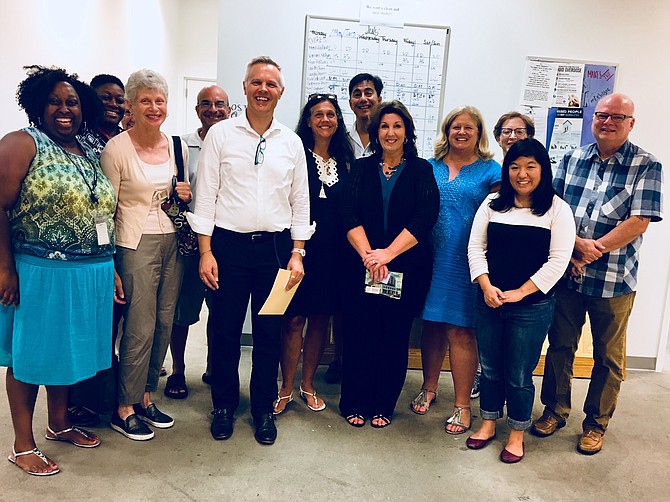 ACT for Alexandria provided tours of nonprofits this summer, including the Carpenter’s Shelter at Landmark Mall.

By Betsy Micklem, Director of Development, ACT for Alexandria

This summer, ACT for Alexandria has been offering site visits with a few local nonprofits to see firsthand what is being done here in Alexandria. On Aug. 1, a group of 13 visited Carpenter’s Shelter and we found that there is a lot going on at the Landmark Mall this summer. First the movie crews showed up to film the next Wonder Woman and then on June 8, Carpenter’s Shelter relocated to newly created space inside the old Macy’s. The move was the culmination of many years of looking for a possible site to use temporarily while a new shelter is being rebuilt on N. Henry Street.

The idea of moving to Landmark Mall was originally greeted with laughter, and when first proposed to the Howard Hughes Corporation, they were a bit incredulous. But after further consideration, this crazy idea took wings and now houses 60 full-time residents, including space for up to six families.

Shannon Steene, Carpenter’s Shelter’s Executive Director, and Kerry Donley, former board member as well as former Alexandria Mayor, spearheaded this transition. Steene says it has taken the collaboration of city government, local residents, and the assistance of many at the Howard Hughes Corporation to make this relocation possible.

“We knew it was going to be a challenge. We are a pretty specialized use for any space and we know that. We also knew that Carpenter’s Shelter has a long and deep history of engaging the community to solve problems,” says Steene. It’s been quite a journey, and the partnership between the Howard Hughes Corporation and Carpenter’s Shelter has brought new life the Mall this summer.

Carpenter’s Shelter was created when Fr. Tony Casey, a priest at Blessed Sacrament Catholic Church, discovered two men sleeping outside the church and invited them in. Soon there were more men seeking shelter and the faith community responded. Over the years, Carpenter’s became its own nonprofit and has moved to find larger spaces as the need arose. Nineteen years ago, they moved into the abandoned DMV on N. Henry Street. The new Carpenter’s Shelter that will be built over the next two years on N. Henry Street will expand the space available to serve Alexandria residents and will include affordable housing on the new upper floors of the building.

“The solution to homelessness is housing. This project pairs the short term fix of shelter with the long term solution of housing that is affordable. It’s a powerful combination coming together,” says Steene.

Carpenter’s Shelter has always benefited from the generosity of the Alexandria community. Every day of the year, the shelter serves three meals to up to 60 residents. That is 65,700 meals a year donated by groups, individuals, corporations and faith groups. Volunteers help with transportation and donations provide needed items that residents lack. Alexandria is a caring community and you need not look further than what is being done every day now at Landmark Mall. Looking for a way to get involved? Contact April Schroeder, volunteer coordinator, at 703-548-7500. Go hang out at the Mall, you won’t regret it. Interested in hearing about more site visits? Contact betsy.micklem@actforalexandria.org.