‘Perfect Show for the Whole Family’ in Chantilly
Votes

‘Perfect Show for the Whole Family’ in Chantilly 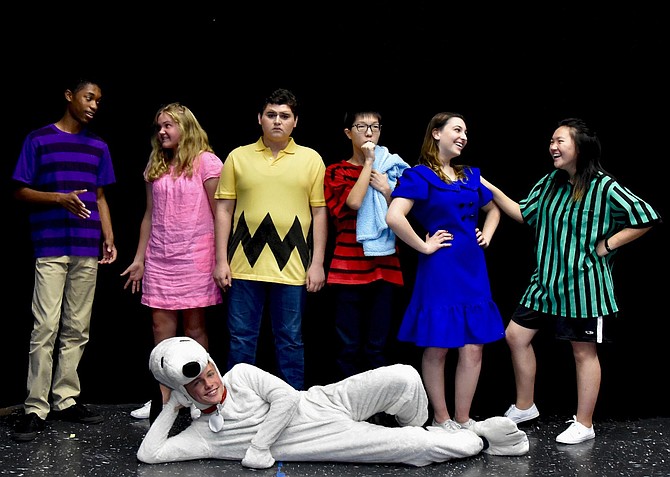 Featuring a cast and crew of 45, Westfield High will usher in the holiday season by presenting “A Charlie Brown Christmas.” Although geared for children, it’s something the whole family will enjoy.

The curtain rises Friday-Saturday, Dec. 7-8, at 7 p.m., and Sunday, Dec. 9, at 2 p.m. Tickets are $8 at the door and via www.westfieldtheatre.com. At the end, the cast will sing Christmas carols onstage, and a special guest will make a surprise appearance.

It’s also a fundraiser for the nonprofit Fisher House, which builds homes where military members, veterans and their families may stay for free while their loved ones are in the hospital. There’ll be a donation box in the school lobby, before and after the play.

“The show focuses on Charlie Brown’s struggle to both understand the holidays and find joy in them,” said Director Rachel Harrington. “Eventually, he learns that Christmas isn’t about the presents and decorations — it’s about the friends and family you share it with.”

She said rehearsals are going really well, and the set built by the drama parents and students will show Charlie Brown’s neighborhood and a winter wonderland. Scenes will also take place at school during the Christmas pageant and outside Snoopy’s doghouse. And the actors will be dressed to look like the characters in the iconic, “Peanuts” comic strip and cartoons.

“My cast is a group of wonderfully energetic students, and they do a fantastic job of bringing this classic, Christmas story to life,” said Harrington. “The show will appeal to everybody because of its sweet nature and holiday theme. It’s a perfect show for the whole family.”

Gutierrez-Urista is having fun with this role because “Charlie Brown is an iconic character and has such a vast personality. He’s so dynamic and goes through a dramatic conflict. It’s cool to portray the perspective of a child and go through his issues — and he’s also very funny.”

He’s also enjoying being in a children’s show because of its “light innocence that we, as high-school actors, don’t get to play as much. And it’s fun to rediscover that and identify with these kids who have their whole lives in front of them. It’s also important to give children a good, theatrical experience so they’ll have an appreciation for it and might even want to pursue acting, themselves, someday.”

Describing the show as “bright and happy-go-lucky,” Gutierrez-Urista said audiences will like seeing recognizable scenes from the animated, “Peanuts” classics, “We’ll paint a huge smile on everyone’s faces,” he said. “And I think everyone will leave happy.”

Senior Harry Schlatter portrays Charlie Brown’s dog, Snoopy. “He doesn’t say much, but he’s the life of the show,” said Schlatter. “He always makes funny side remarks and quips without actually speaking. I use lots of big movements to show them; my audition was just pantomiming. Snoopy is witty, sarcastic at times and always there for Charlie Brown to lift his spirits.”

Schlatter said it’s “super fun” playing Snoopy. “It’s my first time doing such a physically based character, and it’s cool to just use movement to tell your message,” he said. “I’ll portray him like a human character who just happens to be a dog.”

He said the children in the audience will be able to relate to the children in the show, and the jokes are “directly for them. Our Charlie Brown is really great, delivering his lines and movements in a childlike way. And I think my costume’s pretty fun to look at, too”

Playing Lucy is junior Lauren LeVine. “Lucy is really assertive, sassy and a little mean sometimes because she’s so blunt,” said LeVine. “She and the others are all like little adults, characterized as children. She’s a ‘queen’ and thinks she owns everything and should be given everything. She’s spoiled, too, and takes herself seriously, even though some of what she says is so outlandish. Her dreams are really big.”

Having a good time with her role, LeVine said, “It’s fun because I’m definitely sassy and social, but I would never say some of the stuff she says. And because she’s mean, I get to channel another kind of sassy. And I like it that she dreams big.”

She said the show will remind adults of their childhood, while entertaining the children. “The music is cute, and everyone will be left with a warm feeling, no matter what holiday they celebrate,” said Levine. “And there are good messages about being there for our friends and enjoying life.”

Senior Paul Lee portrays Linus. “He’s a loyal friend to Charlie Brown,” said Lee. “And even though outwardly he has a childlike appearance, inside, he’s very mature and has a lot of wisdom. He’s smart and can interact with others his age, but he’d rather read than play, and he thinks about things logically.”

“It’s my second time playing him at Westfield, and I really enjoy it,” continued Lee. “I feel like I embody him because he and I are both middle children, and we always turn the other cheek. He carries a really soft blanket, and I’ve now become attached to it, so I understand how it’s become his form of security and comfort.”

As for the show, said Lee, “I really believe it will give the audience a sense of nostalgia, since it’s always been a cherished, Christmas tradition. And even if people don’t have a deep, religious background in the Christian faith, I want them to have this moment of awe and be filled with the beauty of the spirit of Christmas.”