Westfield High presents “The Phantom of the Opera.” 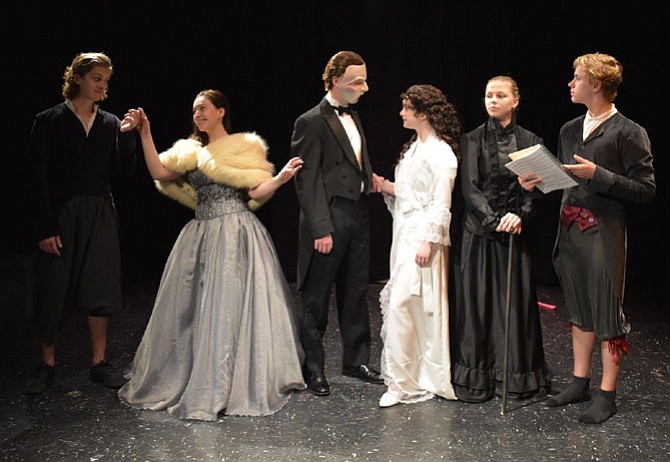 Featuring a cast and crew of nearly 60, “The Phantom of the Opera” — one of the most revered Broadway musicals of all time — will soon grace the Westfield High stage. It’s the school’s Cappies show, and Director Rachel Harrington says it’s something that “will mesmerize the whole family.”

“‘Phantom’ has been performed for 30 years now and has only recently been allowed to be performed by high-school students,” she said. “Its intriguing characters and beautiful orchestration make it stand out. We have a lot of really talented kids in our theater, band and choral programs, and I thought, ‘If not now, when?’”

Westfield band and orchestra students comprise the 27-piece pit orchestra. “The music is complex, but they and the actors are doing a really good job of taking on something advanced beyond their years,” said Harrington. “We transformed our space into a French opera house with baroque styling and intricate design. The scenes take place in and around the opera house or in the phantom’s lair — which is dark and scary, with a rocky terrain.”

“The audience will love the beauty of the music and the heartwarming story of an unrequited love,” she continued. “They’ll also appreciate all the technical prowess the students have brought to the stage. And we have amazing voices — some of the best in Fairfax County. The students are highly trained and have worked on this show a long time to get it where it needs to be.”

Portraying the phantom is sophomore John Henry Stamper. “People think he’s an insane sociopath, but all he wants is affection because he’s never had it in his life,” said Stamper. “He’s had a facial deformity from birth, which has always made him a outcast. He doesn’t understand social cues, so he can come off as creepy.”

The story takes place in late 1800s France, where the phantom is obsessed and infatuated with Christine, a ballet dancer in the theater company. He lives under the opera house and has given her voice lessons through the walls. “But he doesn’t know how to show her what she means to him, so he comes off as smooth, seductive and predatory,” said Stamper. “To others, he’s coarse and mean and they’re scared of him. And to the opera company, a whole mystery surrounds him.”

Saying he’s both excited and nervous about it, Stamper enjoys his role because “The phantom is such a complex and dynamic character. The music is complicated, but also phenomenal. And I like how he’s the protagonist, but also the bad guy — an antihero, and something I’ve never done before. But once I put on the facial deformity, I really get into character. Our head of makeup, senior Kaili Fox, made a mold of my face and created the prosthetic from there. And the mask I wear — which is iconic in musical theater — is awesome, too.”

Stamper’s favorite song is “Down Once More” because it’s when the love triangle between the phantom, Christine and her childhood friend Raoul comes to a head. And they’re all singing about their feelings at the same time.

He said the audience will be impressed with the set design and the music performed by the pit orchestra. “It’s breathtaking because the songs are full, orchestra pieces, complete with violas, cellos and horns,” said Stamper. “And the set has a grand staircase and golden box seats. The entrance to the phantom’s lair is through a mirror in Christine’s dressing room, and the phantom sings to her through it and also emerges through it when he first comes onstage.”

Senior Molly Van Trees plays Christine Daae. “She’s tentative, reserved and scared because she’s had to deal with the loss of her father,” said Van Trees. “In the beginning, she’s nervous; but in the second act, she’s more courageous and sure of herself. The phantom takes notice of her, but she doesn’t know who he is. She thinks he’s the angel of music, sent by her dead father so she can learn more about music.”

Van Trees says it’s the most challenging role she’s ever played because “vocally, it’s so demanding, and my character is a little odd. But ‘Phantom’ has always been my favorite play, and Christine, my dream role, so I’m very honored, excited and privileged to get to do it.”

She especially likes the number, “Notes Part II,” sung by an ensemble with the main characters. “It’s the second time that everyone has received letters from the phantom,” she said. “And what’s cool is that you get to see a different side of Christine — it’s the first time she stands up for herself.”

“It’s such a classic show; and because we’re a younger cast, we’re bringing a different energy to it,” continued Van Trees. “We have a very talented ensemble, everyone’s working hard to make this a great show and all that work has paid off.”

Portraying Piangi, the opera house’s lead tenor and sidekick of the lead soprano, Carlotta, is sophomore Alan Gutierrez-Urista. (He’s also Stamper’s understudy). “Piangi’s a male diva who thinks everything’s about him,” said Gutierrez-Urista. “He puts himself first, except around Carlotta. He’s an Italian tenor, so he struggles with the lyrics’ dialect in their show and is hard to work with.”

Gutierrez-Urista loves his part because “Piangi is kooky, funny and conceited.” And it also makes him stretch because he sings really high notes, including high C — which, he says, is “tough for a male. It’s a hard show vocally because of the difficult music. But once our cast puts it all together, it sounds glorious, as if we were an actual opera company. This is my dream show because it was the first show I saw that made me want to do musical theater for the rest of my life.”

His favorite song is the overture at the start. “It’s powerful and its theme comes out of nowhere,” he said. “And it lets the audience know this is a dramatic show. At the end, they’ll be in tears because of the way it intensifies and pulls at their heartstrings. They’ll like every aspect — the costumes, set, dances, songs and story. Every part is special, and it’s going to be jaw-dropping.”

Gutierrez-Urista also designed the costumes and is hand-beading the phantom’s cape. In keeping with the period, women wear long, extravagant gowns, and the men wear suits and tailcoats. In addition, the opera members wear Greek-soldier costumes for the show they’re performing. The phantom wears a suit, cape, feathered hat and iconic half-mask; and during a masquerade ball, the guests are in elaborate costumes and masks.

“I started designing in early December and like seeing my drawings on paper come to life,” said Gutierrez-Urista. “I was named designer after winning second place in the VTA [Virginia Theater Association] costume-design competition in October.” Junior Annabelle Lassiter helped organize the execution of all the costumes.

Senior Gene Kim plays the opera’s rich patron and Christine’s childhood friend, Raoul. “When he sees her onstage and meets with her again, he falls in love with her,” said Kim. “He doesn’t believe the phantom is real, but sees that Christine’s disturbed by him, so he provides comfort and support for her. He’s caring, confident and bold.”

Calling Raoul “a big character in a big show,” Kim said it’s new for him to portray a love interest and someone giving strength to the main character, but he likes expanding his acting abilities. He also enjoys singing “Prima Donna” because of its “beautiful harmonies plus conflicting melodies” while the opera members coax Carlotta to perform. Overall, he said, “This production explores the whole range of emotions — joy, laughter, rage, sadness and love. And lots of intense moments will keep the audience at the edge of their seats.”