MetroStage presents “Christmas at the Old Bull and Bush.” 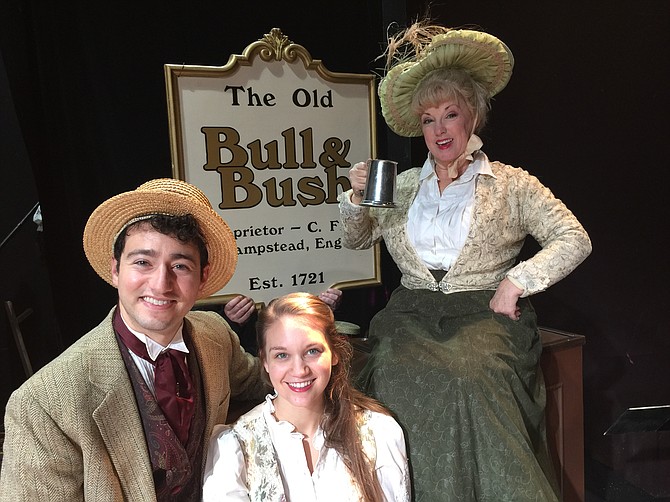 MetroStage in Alexandria is presenting “Christmas at the Old Bull and Bush” from Nov. 29 to Dec. 30. Photo contributed

“Christmas at the Old Bull and Bush,” written and directed by Catherine Flye, had a six-year run at the Old Vat Room at Arena Stage (1997-2003) before debuting at MetroStage last season. Two members of the original Bull and Bush cast will be joined by some new members of an eccentric British troupe to entertain audiences for the holidays. MetroStage is presenting the show again this year from Nov. 29 to Dec. 30.

“We love celebrating the holidays in the British tradition at the Old Bull and Bush. It is festive joyful, fun and a great outing for the whole family. This year, we have some new cast members and some returning, lots of songs, sketches, classic British humor, and a touching tribute to the centennial of Armistice Day ending WWI,” said Producing Artistic Director Carolyn Griffin.

The show offers British music hall entertainment from the Edwardian era that was a variety show for the working classes filled with jokes, songs, skits and dances. This production takes place during the Christmas season 1918, and The Old Bull and Bush Public House, Hampstead, London, is alive with British music hall songs and Christmas carols. Audiences will enjoy a pint or two, eat mince pies and sausage rolls, laugh at corny jokes and funny sketches, and join in sing-a-longs.

“The Old Bull and Bush in Hampstead, London, is probably one of the most celebrated public houses in the world and was a home for the popular British Music Hall, which was entertainment for the working classes. The genre began in the 1890s and was at its height for about 20 years,” said Flye, who ran her own Interact Theatre Company for 20 years. Currently, she is playing Grandma in “Billy Elliot” at Signature Theatre.

She continued: “Florrie Forde was a famous music hall star and her first big hit in 1904 was ‘Down at the Old Bull and Bush.’ It put Hampstead Heath and its picturesque pub firmly on the map and has been sung the world over. It was Florrie who first made famous ‘Pack up your Troubles’ and ‘It’s a long way to Tipperary,’ which became the marching songs for British young soldiers in France during World War I. The song and the story of Christmas in the Trenches has always been included in the Bull and Bush show, and this year it has a special significance as it is 100 years since the Armistice that brought to an end the horrors of World War I. Our production is dedicated to the men and women who have served, fought and paid the ultimate sacrifice for the good of the whole world.”

Brian O’Connor is playing the role of the narrator and Chairman, the “Captain of the Ship” with a sense of humor. “He leads the way into the comedy, singing and frivolity of the Bull and Bush pub where our play is performed. Like any captain of a ship, he is nothing without his superb crew. This show is formatted around the British music hall productions of the last century where audience participation is a must. We have a very joyful cast of players that take the audience into the fun of Vaudeville and music hall traditions.”

He added: “One of the more difficult tasks for me in learning this role is putting all the words into my brain. I played this role 20 years ago and when we brought the play back last year (2017) I had to work extremely hard to get the memorization down. This year, it's a bit easier since the words are now a good ‘friend’ of mine. More like bringing my ‘bicycle’ out again for another fun ride at MetroStage.”

Katherine Riddle plays the role of Miss Daisy May, the Belle of the Barmaids. “She is a sweet, young Irish girl who works at the Old Bull and Bush — a public house near Hampstead Heath, London. Her dream is to become a glamorous and famous music hall singer like Florrie Forde, whom she admires greatly. Daisy has a budding romance with Mr. Percival Pennyfeather — a dapper young man who frequents the Bull and Bush and supports Daisy’s dreams.”

She continued: “Daisy is like a little ray of sunshine. She finds the beauty in everything and still has an air of childlike innocence. She believes her future is full of opportunities and love, and is unsullied by the troubles of the world around her. It is that quality of purity and optimism that I love most about Daisy; however, it can be difficult to portray without appearing unintelligent.”

Jimmy Mavrikes plays the role of Percy Pennyfeather, who is the personification of panache, charming, and a bit of a showman. “He is in love with the barmaid at the Bull and Bush, Miss Daisy May; sometimes he shows off just for her — she gets his knickers in a right old twist,” he said.

He continued: “The most challenging part of this role has to be the ‘The Green Eye of the Little Yellow God.’ It’s a ‘dramatic monologue’ that was a staple in music halls back in the day. It has been done by many great comedians, so there is a lot to live up to, while still making it our own. Keeping that British dry humor, and not laughing at the hilarious Sherri L. Edelen who is behind me acting out everything I say is quite a challenge.”

Sherri Edelen’s character is based on real-life Florrie Forde, who was Australian-born but left for London at age 21 when she quickly became a star of the Music Hall. “She was known for singing meaningful and inspiring songs which the audience could join in and sing along especially during war time,” she said.

She added: “I love this kind of entertainment. Music Hall, revues and Cabaret are intimate settings which I most enjoy. But our show is chock-a-block full of silly comedy. That’s exactly what everyone needs right now — belly laughs. Add in the holidays and you have a cherry on top of your ice cream sundae or should I say some whipped cream on your pumpkin pie.”

Albert Coia is playing the role of Bertie Ramsbottom, a slightly inebriated regular at the Bull and Bush. “It’s a character I have played many times in music halls over the years so it’s rather easy for me. The main challenge is ensuring I relate with each and every audience, and the Chairman, as I often interrupt the proceedings. I really enjoy playing this character and hopefully this transmits to the audiences.”

Music Director Joseph Walsh (Maestro Peabody) is an adjunct professor of opera at George Mason University and is the general and artistic director of Lyric Opera Virginia with two decades of experience in presenting and conducting opera and orchestras in operatic performances.