Jingle on the Lake 2018 in Reston
Votes

Santa comes through for the children. 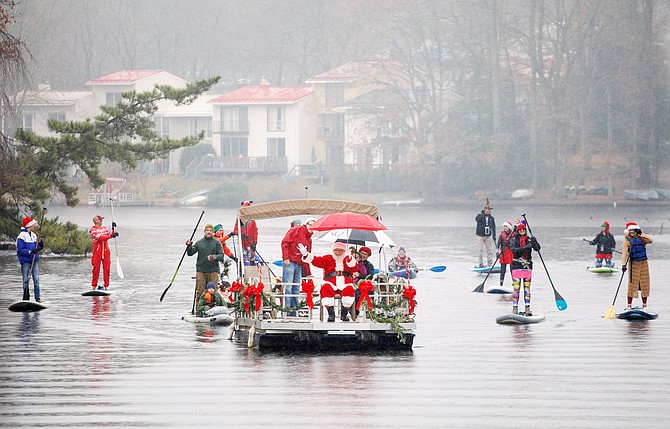 Santa is escorted by an entourage of his best paddleboard elves as he prepares to dock at Lake Anne Plaza in Reston for the highly anticipated “Jingle on the Lake” produced by Lake Anne Merchants. Photo by Charlotte Geary https://charlottegeary.com 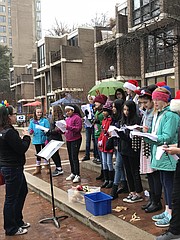 Artist Pat Macintyre, the owner of Reston Art Gallery & Studios, helps Melanie Wall, 5, of Reston learn hands-on how to craft her candy cane ornament made out of pipe cleaners while volunteer, Alexis Craig, 10, of Reston assists with the red bows. 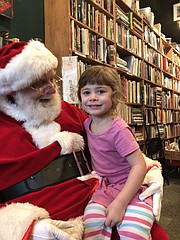 Hazel Verardi-Cole, 4 of Reston, sits starry-eyed on Santa's lap during Jingle on the Lake produced by the lake Anne Merchants. Cole, her family, and Santa are snug and dry inside Reston's Used Book Shop at Lake Anne Plaza. "This is the first time she sat and spoke to Santa,” said her dad, Jon Cole.

Scott Cissel of Reston looks over the watercolors by acclaimed watercolorist and teacher, Lassie Corbett, a member of the Reston Art Gallery & Studios. “I’m looking for Christmas gifts," said Cissel who added he was at Lake Anne for the Santa meet and greet.

Lake Anne Merchants hosted "Jingle on the Lake” at Lake Anne in Reston on Saturday, Dec. 1, 2018. The very heavy drizzle and rain did not deter parents and little ones. Instead, they came armed with umbrellas to enjoy the classic family-friendly attraction featuring a holiday shopping event, children’s crafts, choral and orchestra performances, Santa arriving by pontoon boat, and more.

Out on Lake Anne Plaza, renowned artist, Pat Macintyre, dressed in a red cape and donning a long velvet stocking cap, bent over a table crowded with colorful pom-poms, pipe cleaners, markers, bows and more. Little children squeezed close to the Pied Piper of Art who urged them to create whatever whimsy they wanted and then praised the children profusely. Alexis Craig assisted Macintyre. "Technically, I'm a volunteer," Craig said. "We are crafting ornaments.” Melanie Wall, 5, of Reston set about twisting red, white and green pipe cleaners to make a candy cane like one she had recently seen.

Standing on a higher area facing the plaza, the Lake Anne Elementary School Chorus & Orchestra performed a selection of holiday favorites. Chorus Director, Mallory Cave commented after the performance, "These kids, in particular, are a very positive and excited group. They love to sing."

In the Jo Ann Rose Gallery at the Lake Anne Community Center, 1609- A Washington Plaza, Reston, the buying audience found original fine art and artisan works in a variety of media and a wide range of sizes and price points by accomplished creators in the benefit art sale, Gifts from the HeART. Watercolor painter Lassie Corbett explained that during Gifts from the HeART, the artists themselves sell their works with a portion of the proceeds going to benefit Cornerstones, the non-profit, Reston-based organization that offers "Hope for Tomorrow Today."

At noon, Santa arrived in high style, aboard a pontoon boat coursing across Lake Anne accompanied by his paddleboard elves and friends. Santa docked near the bronze statue of Robert E. Simon and eventually made his way to Reston’s Used Book Shop.

Parents and children waited patiently in a long line for their opportunity to have a moment with the man from the North Pole. Santa settled himself in the literary living room of the cozy Reston Used Book Shop at 1623 Washington Plaza on historic Lake Anne. One of the first children to greet Santa was a small girl, Hazel Verardi-Cole 4, of Reston. She sat starry eye-ed on Santa's lap and quietly talked with him.

"We appreciate Santa making it through the rain by paddle boat," said Hazel's dad, Jon Cole of Reston as he watched his daughter. "This is the first time she sat and spoke to Santa."