Only Embark with Everyone in Mount Vernon Aboard
Votes

Only Embark with Everyone in Mount Vernon Aboard 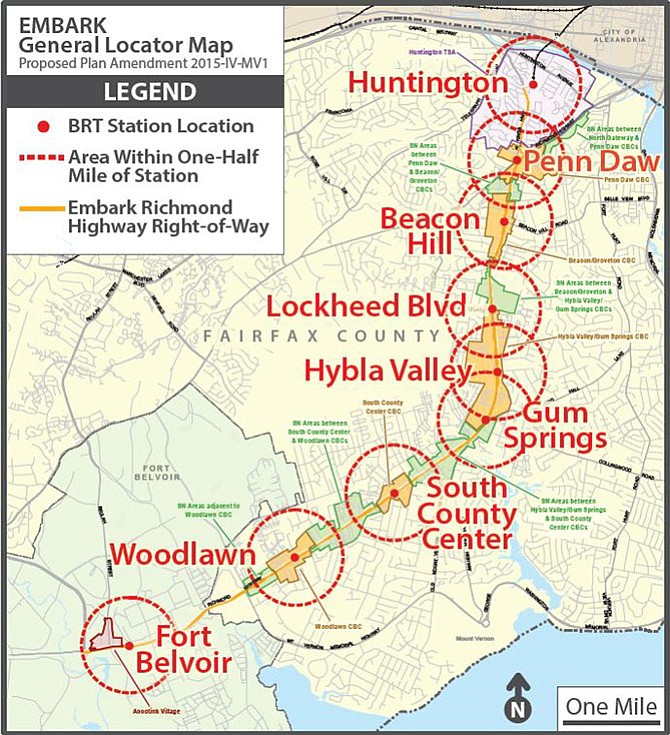 “We want to allow all who want to live in Fairfax County to be able to do so. We don’t want to gentrify these members out of our community.” — Mary Paden, representing South County Task Force for Human Services

Embark is going to transform Richmond Highway. The full scope of the plan’s impact on the Mount Vernon area was laid out at a Planning Commission meeting on Thursday, Jan. 25. Embark Richmond Highway is a multi-year effort involving the implementation of bus rapid transit (BRT) along Richmond Highway and related transportation, land use, and design changes from Huntington to Fort Belvoir.

The plan will reshape Mount Vernon, but local citizens spoke up to ensure that the distinct communities that make the area unique aren't wiped away. An update to the Embark Richmond Highway plan called for six community business centers along the corridor near the BRT stops. There was enthusiastic support from the local business community, who said the plans’ redevelopment could breathe new life into Mount Vernon’s economy.

But among local residents, there were concerns about preserving the accessibility of Mount Vernon, for historic neighborhoods with roots to the area’s founding to securing rental affordability to prospective residents.

“We want to allow all who want to live in Fairfax County to be able to do so, said Paden. “We don’t want to gentrify these members out of our community. [We] advocate for innovative ways to make sure tenants have safe, clean housing.”

Paden’s concerns were echoed by several other members of the public. Monica Billger pointed to the national equity atlas map from 2015 which showed extensive socioeconomic disparities along Richmond Highway, which showed limited access to healthcare, high rent burdens, and poverty stretched along the route Embark Richmond Highway will follow.

Beyond the immediate threat of gentrification pushing out Mount Vernon’s affordable housing, there were concerns that some of the region’s oldest communities could be threatened by the new transportation plan.

Ron Chase, representing the Gum Springs Historic Society, said he would have liked to see some recognition of his neighborhood in the historic education accompanying the transportation plans. Gum Springs is the oldest African-American community in Fairfax, existing as a freed enclave even before emancipation.

“I don’t see that reflected within the Embark document,” said Chase. “I don’t see it when you redirect the main entrance of Fordson Road into Gum Springs. I don’t see concern for the historic value of this black community. Up until present day, African-American history was not being told, and here we have an opportunity to bring forth all of what we knew about but nothing was being said.”

In addition to housing affordability and history, the last major item of concern for many local residents was a hope for greater protections for Mount Vernon’s natural spaces along the redeveloped transit corridor.

“People benefit from connections to healthy, natural systems,” said Catherine Ledec from the Friends of Huntley Meadows Park. “Large, healthy trees, green corridors, stream valleys daylighted and filled with native wildlife where we can observe it: this is what we want in our [community business centers]. Friends of Huntley Meadows Park does not support any changes that add residential as an option to environmental quality corridors. These areas provide important ecosystem services that we need to maintain protected.”

The Planning Commission deferred any decisions on Embark Richmond Highway until Feb. 22 to leave the record open for public comment and explore public concerns.

“There has to be a nexus between developers coming in and doing it flexibly but that we don’t lose the sense of place,” said Planning Commission member Mary Cortina. “We don’t want to squeeze out the ecological areas and the livability.”

“When we revisit this, I’d like to understand if the issues raised relative to housing are achievable or actually in the plan,” said Planning Commission member Phillip Niedzielski-Eichner. “I’d like to have some more information.”