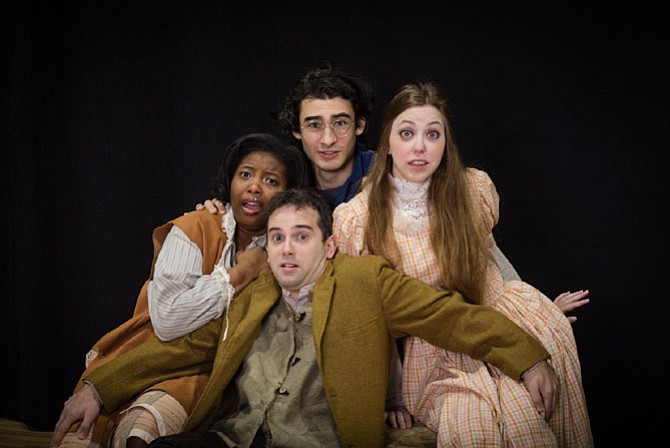 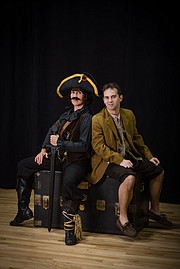 Carla Crawley Ito as Black Stache, and Gary Bernard DiNardo as Boy/Peter in “Peter and the Starcatcher” from Reston Community Players.

Reston Community Players presents “Peter and the Starcatcher” at Reston Community Center CenterStage, Hunter’s Wood Village Center, 2310 Colts Neck Road, Reston. Performances Jan. 19 to Feb. 3, 2018. Fridays and Saturdays at 8 p.m. with Sunday 2 p.m. matinee on Jan. 28, 2018. Tickets: $23 Adults (19-64), $20 seniors (65 and older), and $20 students (18 and younger). Call 703-476-4500 or visit http://www.reston...">www.restonplayers.... Note: There is a special sensory-friendly matinee performance on Saturday, Jan. 27, at 2 p.m. This sensory-friendly matinee performance will aim to provide a positive theater experience for individuals of all ages with autism or other sensory-related disabilities.

So, how does a young British orphan lad and his mates become the famous “Peter Pan and the Lost Boys?” How does an orphan even decide to never want to grow up? Does he have some help along the way from someone called a starcatcher? And what does a mysterious trunk have to offer up?

Well, the Reston Community Players will have some answers to those questions and more with its upcoming production, “Peter and the Starcatcher.” The production is aimed at anyone interested in having fun while finding out how Peter Pan came to be and what a starcatcher might have to do with it.

Full of fantasy and imagination, the Reston Community Players production is directed by Jolene Vettese with music direction by Beth Atkins. There is a cast of a dozen actors taking on dozens of characters on stage. Featured players include Raeanna Nicole Larson as Starcatcher-in-training, Molly Aster and Gary Bernard DiNardo as Boy/Peter along with a cheeky villain named Black Stache played by Carla Crawley Ito.

“Peter and the Starcatcher” was the winner of five Tony Awards when it first appeared on Broadway in 2012. The show is based on the novel by Dave Barry and Ridley Pearson.

Vettese called “Peter and the Starcatcher” a unique and fun choice for RCP to produce for their audiences with its clever wordplay, daring movement and live music.

And the production travels about: from the deck of a ship to a tropical island, and throws in modern references that pop up with great humor.

Inviting audiences to escape into “Peter and the Starcatcher,” Vettese proposed that audiences “escape for just a little bit, to a world with Pirates, Sailors, and Mermaids, where starstuff exists and people can fly, where ‘to have faith is to have wings.’”

On these cold winter nights, escaping into fun sounds delicious. And along the way take joy in learning a bit of what made Peter Pan who he is in this grownup prequel to the treasured story.