Letters from Father to Unborn Son in Reston
Votes

Letters from Father to Unborn Son in Reston 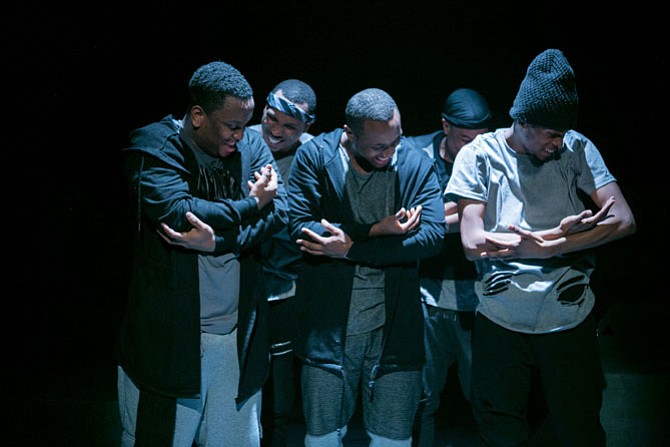 Recipient of five Helen Hayes Awards for professional theater excellence in the Washington, D.C. area, including for Outstanding Play and Outstanding Director, the critically acclaimed Theatre Alliance production of “Word Becomes Flesh” is coming to Reston’s CenterStage. It will be the Virginia premiere of the very singular show.

“I have seen this award-winning production twice and have been stunned by the performances of these five actors,” said Paul Douglas Michnewicz, director, arts and events, Reston Community Center. “Theater Alliance continues its tradition of bringing the most advanced of theatrical performances to Reston's CenterStage."

Written by spoken-word poet and playwright Marc Bamuthi Joseph and directed by Psalmayene 24, “Word Becomes Flesh” was developed from a series of letters written from a single father to his yet unborn son. “Word Becomes Flesh” examines masculinity and responsibility for a father-to-be within the constructs of hip-hop culture.

“‘Word Becomes Flesh’ is a unique production that gives a strong, rich voice to those who may have been unheard in the past; or for those whom there have been only accepted stereotypes in the past,” said award-winning director Psalmayene 24.

“The production gives audiences the chance to see a segment of America likely not known to them; the heart, soul, and mind of African-Americans on the verge of becoming a parent,” added Psalmayene 24. “‘Word Becomes Flesh’ gives a voice to a young black male soon to become a father with his dreams, hopes and anxieties. The production gets inside his skin.”

The performance uses spoken word, movements, hip-hop, dance, and music to explore what it means to be a black man in the 21st century. According to Psalmayene 24, the play’s language and physical movements are “exciting and contain important messages and conversations that are begging to be heard.” The show aims to get beyond stereotypes to “break thru the mythology and build bridges with the audience. There is a universal core to it; that of a new parent, a new father waiting for the birth of his child.”

Psalmayene 24 further indicated that he wants to “create something intimate for the audience during the ‘Word Becomes Flesh’ performance. And to carry that forward into an open talk-back after the show with a conversation that engages the audience.”

“Word Becomes Flesh” will be the Virginia premiere of a searing, not-to-be-missed performance centered upon dignity told through movement and language.